US oil price below zero for first time in history

US oil prices crashed into negative territory for the first time in history as the evaporation of demand caused by the coronavirus pandemic has left the world awash with oil and not enough storage capacity — meaning producers are paying buyers to take it off their hands.

West Texas Intermediate, the US benchmark, traded as low as -$40.32 a barrel in a day of chaos in oil markets. The settlement price on Monday was -$37.63, compared to $18.27 on Friday. Traders capitulated in the face of limited access to storage capacity across the US, including the country’s main delivery point of Cushing, Oklahoma.

The collapse will be a blow to US president Donald Trump, who has gone to great lengths to protect the oil sector, including backing moves by Opec and Russia to cut production and pledging support for the industry.

The shale sector has transformed the US into the world’s largest oil producer in the last decade, giving Mr Trump a foreign policy tool he has brandished as “US Energy Dominance”, but which now faces a rapid decline.

Negative prices are the latest indication of the depth of the crisis hitting the oil sector after lockdowns imposed in many of the world’s major economies have sent crude demand tumbling by as much as a third, leaving the industry facing what Jefferies analyst Jason Gammel called “the bleakest oil macro outlook” he had ever seen. 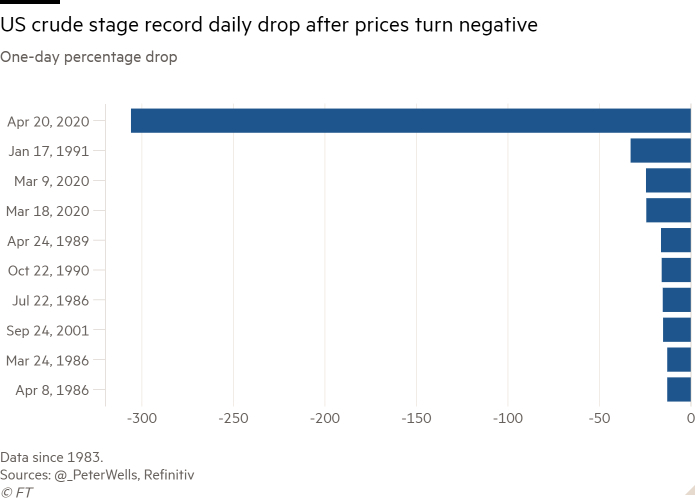 Not all oil contracts are trading in negative territory. Brent, the international benchmark, lost 8.9 per cent on Monday to fall to $25.57 a barrel, but is less immediately afflicted by storage issues.

Brent is a seaborne crude allowing traders to easily ship it to areas of higher demand. Amrita Sen at Energy Aspects said: “With Brent you can put it on ships and move it around the world immediately. Storage tanks at Cushing, however, will be full in May.”

WTI contracts for delivery in June lost 14.7 per cent but held above $20 a barrel, though traders warned it could face further losses. Both benchmarks traded above $65 a barrel as recently as January.

Stephen Schork, editor of oil-market newsletter The Schork Report, said he expected access to storage capacity in the US to be exhausted within two weeks — and cautioned that the collapse of the country’s oil consumption was accelerating.

“It just gets uglier from here,” Mr Schork said, adding that sharply rising unemployment numbers meant fewer and fewer Americans would be driving, hurting petrol demand even during its peak summer months.

“This summer is dead on arrival. The biggest demand months are not going to happen,” he said.

Prices for physical grades in many North American regions have fallen into the low single digits reflecting a dearth of buyers able to take delivery of oil, even as prices for later contracts have held up marginally better due to some investors betting on an eventual rebound.

Dealers speculated that traders who had successfully leased storage were putting pressure on rivals without access to tank farms. That could allow them to snap up ultra-cheap oil for their storage tanks, before locking in much higher prices in the futures market, essentially being paid to take oil and then selling it a month later for more than $20. 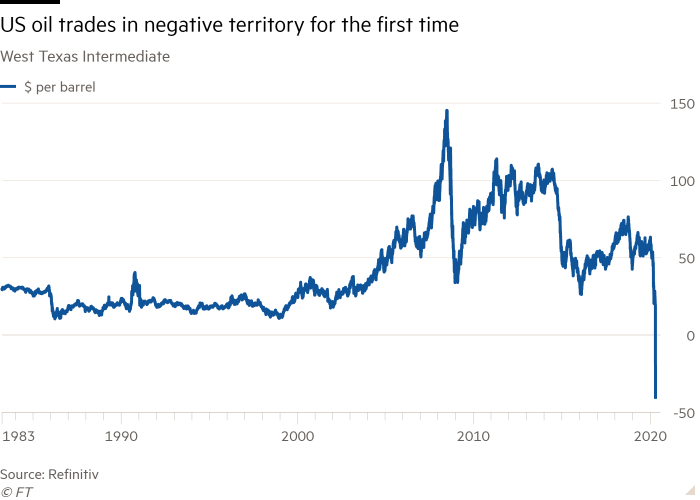 Crude prices have plummeted this year on the possibility that the coronavirus outbreak will cause a deep global recession. The number of Covid-19 infections worldwide topped 2.4m as of Monday, according to data from Johns Hopkins University, with more than 165,000 dead.

US equities were lower, partly because of the weakness in energy shares such as ExxonMobil and Occidental Petroleum but also because of gathering gloom about the length of time it will take for the country to fully emerge from lockdowns. The S&P 500 closed down 1.8 per cent. The energy sector was off 3.3 per cent.

In fixed income, the yield on the 10-year US Treasury was 0.04 percentage points lower at 0.62 per cent.

Earlier, equity markets in Asia came under pressure. Japan’s benchmark Topix fell 0.7 per cent and Australia’s S&P/ASX 200 shed 2.5 per cent, while Hong Kong’s Hang Seng was off 0.2 per cent.

European indices steadied, with the continent-wide Stoxx 600 closing 0.7 per cent higher, while London’s FTSE 100 and Frankfurt’s Dax gained 0.5 per cent.

The deepening fall in oil prices has come despite an Opec-backed deal to cut roughly 10 per cent of global crude supply. Reductions of varying magnitude are planned to run until April 2022 as part of efforts to stabilise prices.

Baker Hughes data on Friday showed that the number of active oil rigs in the US has dropped by more than a third over the past month. But signs of curtailed US supply have done little to boost prices.

“Too much oil, with nowhere to put it,” said Kit Juckes, a senior strategist at Société Générale in London, noting that “oil-sensitive currencies are under pressure again”.