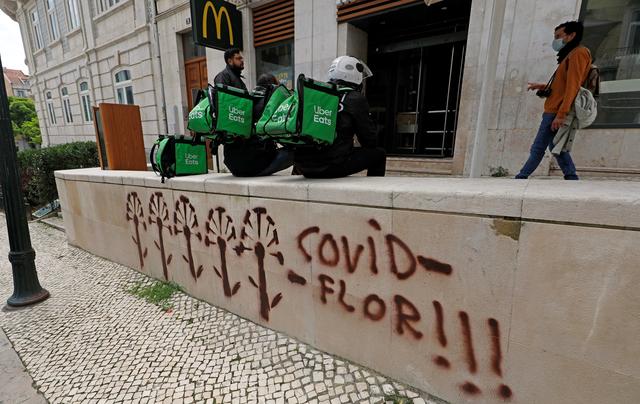 It is 46 years since an almost bloodless revolution finally led the country to democracy, ending the authoritarian regime put in place by dictator Antonio Oliveira Salazar, on April 25 1974.

Every year, to pay tribute to those who fought for democracy in the “Carnation” revolution, thousands of people gather in the streets holding red carnations and shouting “Fascism, never again!”.

Similar celebrations were planned this year, but the nation’s strict coronavirus lockdown, which was declared on March 18 and renewed until May 2, forced authorities to come up with alternatives.

And at exactly 3 p.m., many residents took to their balconies to sing the revolutionary anthem “Grandola Vila Morena”.

“Singing from the window, all at the same time, is a way to say that even in confinement we celebrate democracy and freedom,” the leader of the Left Bloc party Catarina Martins told RTP television.

In Lisbon’s Alcantara neighbourhood, a group of municipal workers drove around in an open truck with loud speakers, singing traditional songs and handing out carnations to residents confined to their homes.

The annual event at the country’s parliament was also subdued. Normally, 230 lawmakers and hundreds of guests gather, but numbers were limited this year to reduce the risk of contagion.

Portugal has so far reported 23,392 coronavirus cases and 880 deaths, a small fraction of the toll in neighbouring Spain, and it plans to slowly start reopening its economy from May onwards.