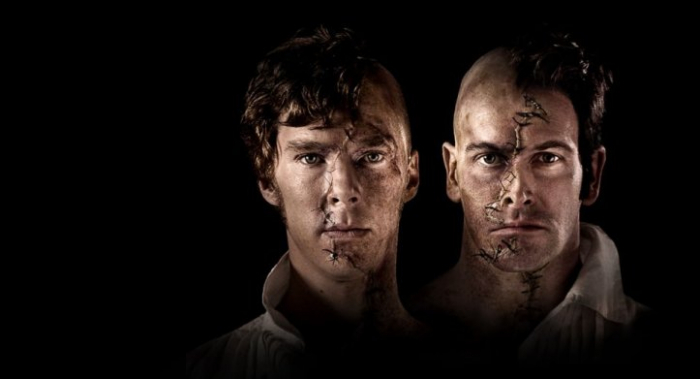 The bell tolls, signalling the beginning of this epic tale, and in the very strong capable hands of director Danny Boyle (Old Vic’s The Children’s Monologues), the Nick Dear’sadaptation of Mary Shelley’s mythic fable, Frankenstein rings clear and true, shining as brilliantly as the sea of stars above the audience’s heads. With Benedict Cumberbatch (National’s Hamlet) and Jonny Lee Miller (MTC’s Ink) alternating the roles of Victor Frankenstein and the Creature on nightly bases, the National Theatre production twists and turns with a dark pained elegance.

The creature rips his way out, as the surges of scientific light and sound push him through the womb, groaning and breathing hard into a world that will detest the sight of him. The deeply intelligent production pulsates with a heart-beating intensity that sparks life into the focused compassionate view of the tale of the damaged creature, rather than the one that revolves around the obsessive disconnected scientist. It’s clearly the strongest vantage point, as the shift reveals a psychological dynamic of privilege and power that is both topical and as modern as the production’s epic design. It poses the question, who is really the monster, and who has the ability to love and engage his fellow-creature? 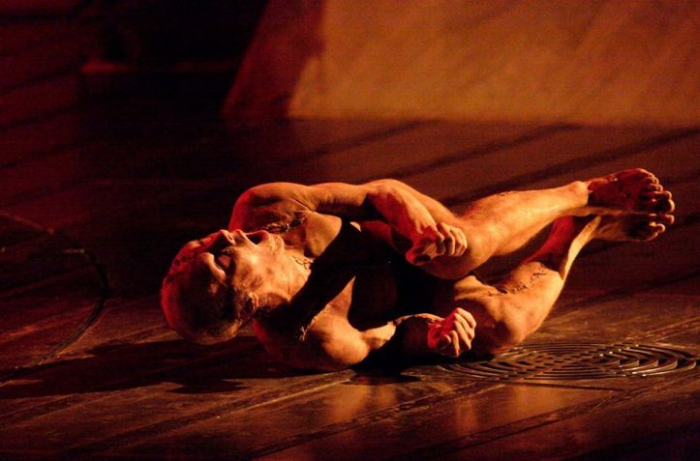 The staging ushers us quickly into the depth of the electrocuting creation of a creature destined to upend his creator’s life. The story is birthed by a brilliantly designed structuring, courtesy of Mark Tildesley, providing an endless display of metaphoric marvels blazing with light, steam, and force.  The light-filled canopy hangs over the auditorium shining the most brutal of light on Victor’s inhuman and narcissist experiment, one that makes him feel like a God, but with no understanding of empathy. A glaring and noisy steam train pushes into place, unloading a cruel burst of smoke and a pack of inhumanity brought on by the industrialisation of the time. The Creature wriths about, twitching and turning desperate to find and discover the world around him. Birds shoot out dynamically into the heavens, and fire erupts out of the floor. The creation is as spectacular as what is being delivered by whichever actor is on stage, as he attempts with determination to stand upright in the rain on a narrow strip of earth and grass. The lighting pulses with heat and a heart throughout that is almost overwhelming in its beauty, while the stage beautifully and dynamically morphs from one exceedingly well-orchestrated stance to another with a quick structural turn and twist. 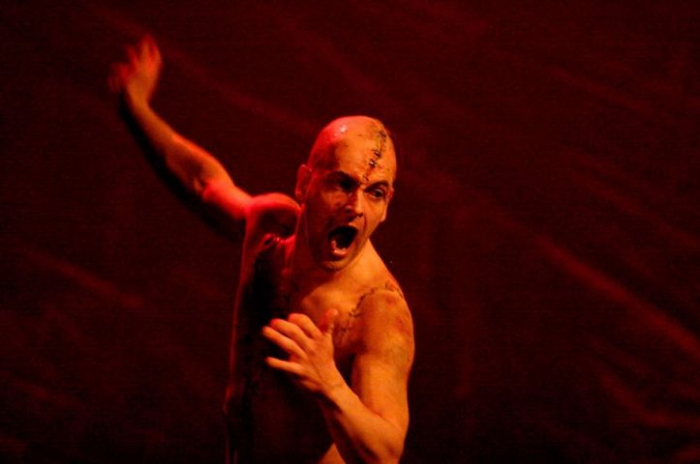 “The furnace is hot” in this restructuring, as the idea of seeking “your salvation in the blood of Christ” is thrown heartlessly and violently like stones at a beaten-down animal. The sun rises, a house floats in, and a deep lake drops out, as we are given insight into the tortured life of the creature. Much like the incarnation I saw at the Classic Stage Company theatre a few months ago (which feels like years ago in a very different world), Victor’s response plays little importance in the beginnings, beyond that initial rebuttal and abandonment. This story is about that child-like reaction to being left to his own devices, abandoned and alone, birthing the throbbing hard feelings of betrayal throughout his battered frame. Injustice figures strong, but Shelley’s social complaints against cultivation seem less important in this adaptation than the psychology of the discarded and disconnected. 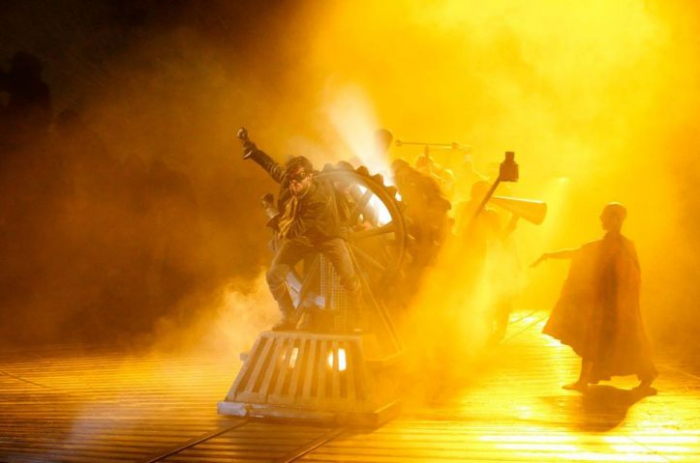 The Creature (Benedict Cumberbatch) and The Company. Photo by Catherine Ashmore.

Following the painful rebirth of the Creature that lasts a long and almost tedious ten to fifteen minutes, the stumbling steps of the brutal, somewhat-human form surges forward into the world that exists about him. The painful blows thrust on the Creature is heartbreaking and cruel. Punished and beaten, he finally finds companionship and kindness in the blind. Feed-in more ways than one, the blind old man who offers him insight into the world of language, education, philosophy, and poetry, inhabited in the form of the wonderful Karl Johnson (National’s The Seafarer), also inadvertently teaches him mistrust when the opposite should have been given. “I sweep to my revenge“, he cries, and thus he turns his back on the humane. Literature enhances the creature, forging hatred and cruelty, but also gives him desire for love and a longing for companionship. And even though it also gives him bitterness and murderous blind rage, the guilt ultimately lies in the heart of Victor, and the idea of love and desire are weighed one against the other, as the Creature takes his troubling violent revenge on all those who give out broken promises. 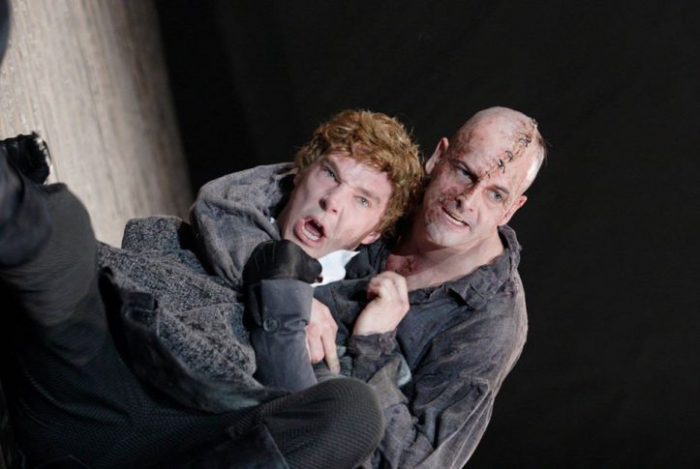 Cumberbatch’s Creature is unforgiving and psychologically dynamic where Miller’s gives us something more muscular and aggressively threatening. They are both powerful unique, but equally authentic, giving us differences in physicality and an edge of something deeper and more angularly defiant. There is something more internally unsettling within Cumberbatch, but a more external quality embodied in Miller’s physicality. Both are sharp and intense, particularly how they each find something superiorly astonishing in their delivery, while also finding an intensity with their Victor counterprogramming. Miller crosses the stage like a dangerous spider after prey, and sits upright more quickly, surveying his surrounding like a hungry scared animal. More menacing than Cumberbatch, his more solid Creature gives you guttural hunger and a determined stance to inhabit, using his muscular frame to transform dynamically, while Cumberbatch gives you a crippling internalized psychological need that feels equal in primal responses, but unique in its unparalleled intensity. Whichever one registers at the moment will feel the most compelling, that is until you watch the other, and then the brilliance shifts. 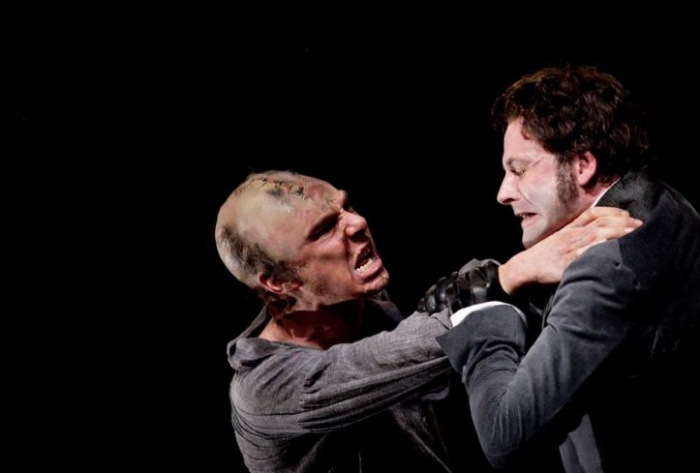 The actors complement one another perfectly in each rendition, finding a balance to reflect the strengths and position of the other. Cumberbatch seems more suited to the role of Victor, in my thinking, making an entrance that exudes his place of scientific privilege and position, but the power of this production is how both find electricity in what ever robe they put on. The fear in the horrified retreat, while yelling “do as I say” registers regardless who is saying it, as the magic is in the moment and the connection between creator and the created, whoever is in the part. The ‘Miller as Creature’ version made more sense visually and physically, especially during the initial scenes of discovery and brutality, but it also might be due to the secondary viewing, and the internal knowledge of what is about to transpire before us. 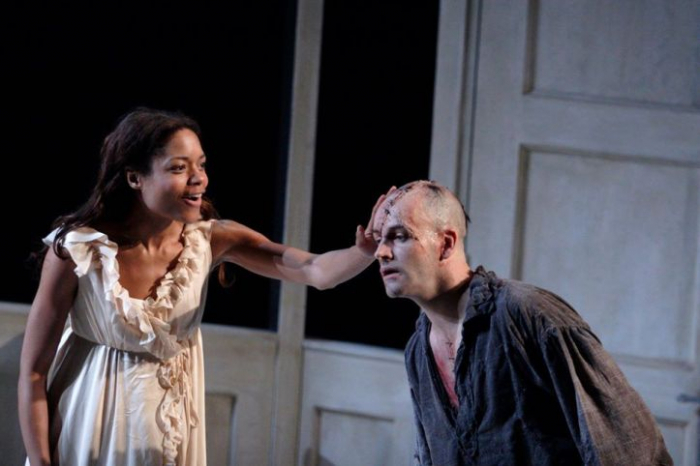 Victor Frankenstein’s world feels more complicit and complicated, while carrying within the production the only parts that felt somewhat clanging. Victor’s father, played uncomfortably by Geroge Harris ( Kingsley Shacklebolt in the “Harry Potter”film series) stumbles in his scenes never finding the right footing in his inauthentic interactions, while Victor’s bride, Elizabeth, played with earnest by Naomie Harris (2016’s “Moonlight“) discovers an understanding that evades Victor’s father. It’s a thrilling edge to stand unbalanced on, with the creative symbolic staging surging forward ideas of the lopsided world. The heartless dramatics simmer with a stunning critique of the belief in an upper-class male dominance and the powerful might of societal privilege. It’s a framework that is completely understandable during this moment in pandemic history where the well-off and white are evading the sting of the virus mainly because of position and power. “They are gittery as hell. The women and children are locked indoors, and the men go out armed,…scared of their own shadows, they are“. Much like the blows to the Creature’s back and body throughout his tortured uprising, the question of who the real monster is shines glaringly bright and loud with an absolute clarity of vision and intent. It’s a magnificently stunning presentation, and one that can’t be missed. We are left astounded as the two depart into the bright cold light of confrontation and deliverance, breathing in with wonderment of the spectacle that we have just witnessed. Take both in, and tell me which you prefer, and which order you saw them. 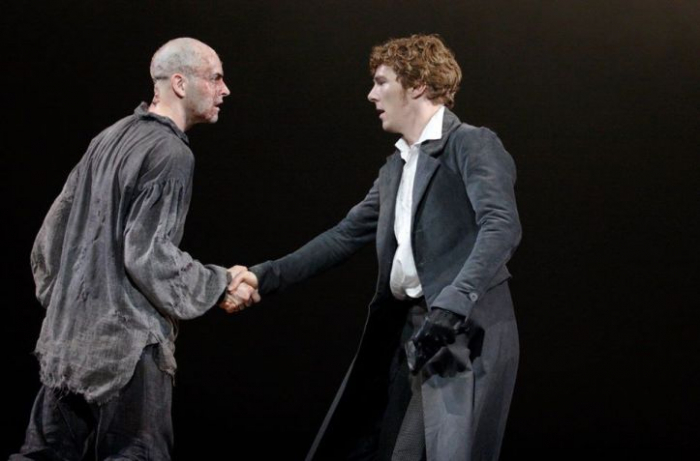