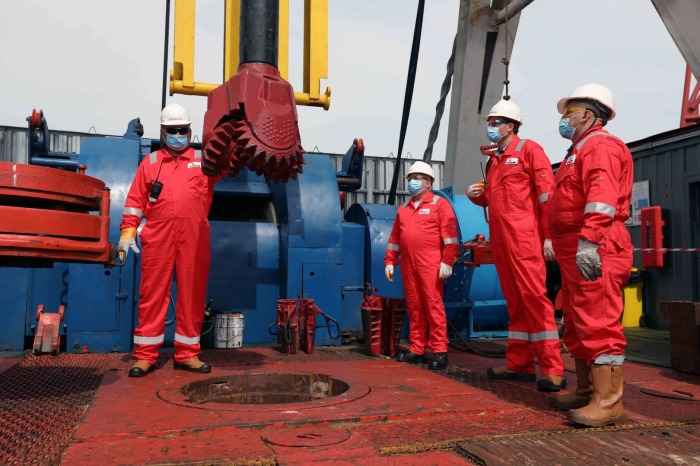 President of the State Oil Company of Azerbaijan SOCAR Rovnag Abdullayev launched the drilling of a new well at the Umid field, AzVision.az reports citing Trend.

“Abdullayev visited the Umid-1 platform at the Umid field on May 5 and reviewed the overhaul and reconstruction works carried out there,” the message said.

SOCAR’s president was informed about the repair work being carried out on the production site.

“Two more wells will be drilled from the Umid-1 platform to accelerate the production at the Umid field,” the message said.

“The design of the new well was carried out by SOCAR’s Oil and Gas Projects Institute and agreed with UK’s well-known Norwell Engineering company,” the message said. “The preparatory work for drilling the well was launched in May 2019. For the first time, the entire drilling process at the site will be controlled by the Umid Babek Operating Company.”

“In connection with the drilling of new wells, reconstruction work was carried out on the platform, production capacity was increased and daily gas production was planned to be increased to 6.6 million cubic meters,” the message said. “The automated fire extinguishing systems, digital control systems and video surveillance systems were installed and put into operation on the platform to strengthen security measures."

“Umid is the first field discovered in 2010 through the internal resources during the period of Azerbaijan’s independence,” the message said. “It is located in the Azerbaijani sector of the Caspian Sea, 40 kilometers south of Baku. A total of 3.4 billion cubic meters of gas and 540,000 tons of condensate have been extracted from the gas condensate field since 2012 up till now. Three wells are currently used on one platform at the field at the field.”

It is planned to build and install another platform at the Umid field - Umid-2, as well as conduct exploration and drilling operations in the nearby Babek structure in the coming period. The Dashgil-2 terminal with a capacity of 24 million cubic meters per day is being built for the primary processing of gas and condensate which are extracted from the Umid-Babek block. The extracted product will be supplied through the underwater pipe of the terminal.

The extracted product will be supplied through the underwater pipe of the terminal. The construction of the terminal launched in September 2019, is underway. In the future, it is planned to transport the extracted products from an exploratory well to the Umid-1 platform through a pipeline to the Babek structure, and from there via an underwater pipeline to the Dashgil-2 terminal.