Azerbaijan has sacrificed a lot for victory over Nasizm – FM 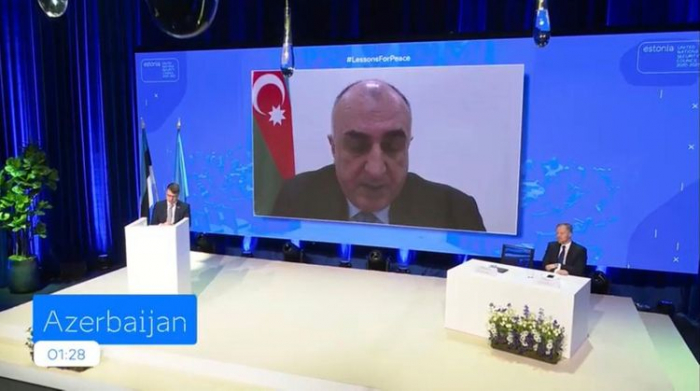 Like all members of anti-fascist coalition, Azerbaijan has made a significant contribution to and sacrifices for the victory, said Azerbaijani Foreign Minister Elmar Mammadyarov.

He made the remarks Friday at the High-level Arria-formula meeting “75 Years from the End of the Second World War on European Soil - Lessons Learned for Preventing Future Atrocities, Responsibility of the Security Council”, the Foreign Ministry told AzVision.az.

Azerbaijan sent more than 640,000 of its brave men and women to the frontline, said the minister. “Almost half of them did not return home. National Azerbaijani divisions displayed an exemplary courage in the fight against Nazism in European countries as well.”

He stressed that the victory was reached not only in the battlefield, but also in the rear areas.

“For a short period of time Azerbaijan arranged production of ammunition and arms, and created conditions for functioning of the objects of the industry relocated from the battlefields. By providing three quarters of oil and 90% of the aviation fuel produced in the Soviet Union during the war time, Azerbaijan made an invaluable contribution to the victory in the war.”

Mammadyarov noted that as a country that sacrificed a lot for the victory over Nazism and mindful of the horrors of the World War II, Azerbaijan is seriously concerned about the instances of glorification in the region, in any form, of the Nazi movement and those who collaborated with the Nazi movement, including by erecting monuments and memorials.

“My country has been continuously supporting the UN General Assembly resolution on “Combating glorification of Nazism, neo-Nazism and other practices that contribute to fuelling contemporary forms of racism, racial discrimination, xenophobia and related intolerance”, and we believe that it can be instrumental in reverting such worrisome tendencies,” he added. “It is deplorable, that despite the bitter lessons the history taught us, the principles enshrined in the UN Charter, particularly prohibition of the threat or use of force against the territorial integrity or political independence of States, continue to be violated, thus undermining peace and security in many parts of the world.”

The minister pointed out that while the victory over Nazism in Europe is commemorated on 8 May, this date also marks one of the tragic days in the history of my country, when back in 1992 Armenian armed forces occupied and subjected to ethnical cleansing ancient town of Shusha in the Nagorno-Karabakh region of Azerbaijan.

“This region along with adjacent districts, which constitutes almost one-fifth of internationally recognized territory of Azerbaijan, has been under occupation by Armenia for almost 30 years now. Hundreds of thousands of Azerbaijanis were forcefully expelled from their homes and became internally displaced persons as a result of the occupation. Occupation of the territories of Azerbaijan elicited 4 UN Security Council resolutions, demanding immediate, complete and unconditional withdrawal of occupying forces from the territories of Azerbaijan. It is regrettable that these resolutions are yet to be implemented.”

“Blatant disregard for Security Council resolutions containing binding demands, represents a clear violation of the UN Charter, and cannot constitute an accepted practice in the Security Council’s discharging of its primary responsibility for the maintenance of international peace and security. As today we are discussing lessons learned from World War II for preventing new atrocities and the responsibility of the Security Council, we reiterate the crucial importance of implementation of resolutions adopted by the principal organs of the United Nations, as well as accountability therefore,” Mammadyarov concluded.