No end to lockdown yet but 'careful' easing begins, British PM Johnson says 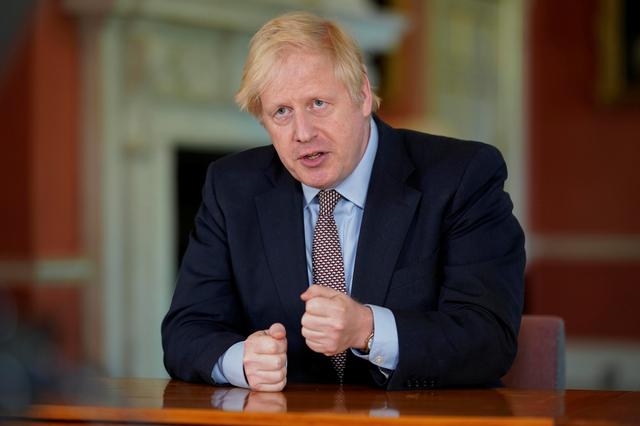 British Prime Minister Boris Johnson said on Sunday the coronavirus lockdown will not end yet, urging people to “stay alert” to the risks as he outlined plans to begin slowly easing measures that have closed down much of the economy for nearly seven weeks.

While his government was giving directions for England, it wants the United Kingdom’s other constituent nations - Wales, Scotland and Northern Ireland - to take the same approach. But there were immediate divisions, with Scottish First Minister Nicola Sturgeon saying she was sticking with the existing “stay at home” message.

Johnson announced a limited easing of restrictions, including allowing people to exercise outside more often and encouraging those who cannot work from home to return to their jobs.

“This is not the time simply to end the lockdown this week,” he said in a televised address. “Instead we are taking the first careful steps to modify our measures.”

Johnson’s government has faced criticism from opposition parties and others over its handling of the pandemic and the prime minister is wary of taking the brakes off too soon. Britain’s coronavirus death toll - 31,855 - is the second-highest in the world, behind only the United States. The bulk of the cases and deaths have been in England.

The government’s decision to replace its “stay at home” slogan, drummed into the public for weeks, was criticised by opposition parties who called the new “stay alert” message too ambiguous.

Johnson earlier tweeted a new government poster with rules including “stay at home as much as possible”, “limit contact with other people” and “keep your distance if you go out”.

In his address, Johnson said people should continue to work from home if they could, but from Monday those who cannot, such people working in construction and manufacturing, should be “actively encouraged to go to work”.

From Wednesday, people will be allowed to take unlimited amounts of outdoor exercise, he said, and can sit in the sun in their local park, drive to other destinations, and play sports with members of their own household.

Until now, people have been expected to exercise outdoors once a day, do so locally, and - despite recent spells of warm weather - told not to go to parks to sit in the sun.

Social distancing rules must still be obeyed, Johnson said, adding that fines would be increased for those who break them.

He detailed an alert system ranging from level 1, where virus is no longer present, to level 5, the most critical, that will allow the government to flag risks in different parts of England and to decrease or increase restrictions where necessary.

Scotland’s Sturgeon said the only modification she was making to lockdown measures was to allow people to exercise more than once a day.

“(That) is the only change that the Scottish government judges that it is safe to make right now without risking a rapid resurgence of the virus,” she told a news conference.

Sturgeon also said she had asked the UK government not to use its “stay alert” advertising campaign in Scotland.

Labour health spokesman Jonathan Ashworth also criticized the “stay alert” slogan. “Many people will be puzzled by it,” he told BBC TV. “This virus really does exploit ambivalence and thrive on ambiguity, we need clarity at all times.”

Britain’s economy - the world’s fifth-largest - has been hammered by the pandemic and the lockdown measures.

The government has faced steady questions from Labour and others on why the country was not locked down earlier, why it has struggled to administer mass testing and why there have been shortages of protective equipment for medics and care workers.

Johnson himself is recovering after falling critically ill with COVID-19, the respiratory illness caused by the coronavirus, last month.

The Sunday Times reported that scientific advisers had told the government that deaths could exceed 100,000 by the end of the year if lockdown measures are relaxed too fast. As of Sunday, Britain had reported some 219,183 confirmed infections.

Johnson said that by the earliest by June 1, the government might be in a position to begin the phased reopening of shops and to get primary pupils back into schools, in stages.

At the earliest by July, and if the infection rates support it, there could be the re-opening of at least some of the hospitality industry and other public places, provided they are safe and enforce social distancing, he added.

With both the death rate and hospital admissions falling, Johnson said it would be “madness” to allow a second spike in infections.

Changes will be closely monitored at a local, regional and national level and the government would “not hesitate to put on the brakes” if there are outbreaks, he said.