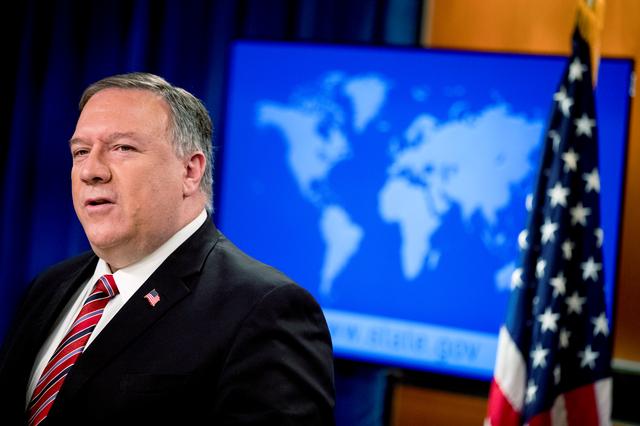 U.S. Secretary of State Mike Pompeo praised Israel on Wednesday for sharing information during global efforts to combat the coronavirus pandemic and took another swipe at China over what he said was its lack of transparency.

U.S. President Donald Trump and his senior officials have engaged in a war of words with China, where the new coronavirus first emerged, saying it failed to inform the world fast enough about the dangers it posed and muzzled those who raised the alarm. Beijing strongly denies the charges.

Arriving in Israel on a one-day visit, Pompeo told Israeli Prime Minister Benjamin Netanyahu: “You’re a great partner, you share information - unlike some other countries that try and obfuscate and hide that information - and we’ll talk about that country, too.”

Pompeo did not name China and did not give specific examples of Israeli cooperation in the fight against coronavirus.

Earlier, Pompeo repeated Washington’s charges against Beijing in an interview for the Israel Hayom newspaper.

“Here is what we know for sure. The virus originated in Wuhan, China. The Chinese Communist Party knew about this virus in December of 2019 (and) attempted to obfuscate this.

“They denied people the ability to talk, they didn’t share this information quickly enough, they created enormous risk for the world,” he said.

The United States has previously cautioned Israel against potential security threats from Chinese investment in Israel, prompting the Netanyahu government to set up a committee last October to vet such projects.

Israel, with a population of nine million, has reported 16,539 new coronavirus cases including 262 deaths. The United States, which has 328 million people, has reported 1.4 million cases and more than 83,000 deaths, the world’s highest number.

Israel moved aggressively and early against the pandemic, shutting its borders in mid-March as part of measures that Netanyahu said had been discussed with the White House.

Pompeo was to meet later with Benny Gantz, Netanyahu’s political rival turned designated coalition partner. The two are scheduled due to swear in their new government on Thursday.

On their agenda has been a proposed declaration of Israeli sovereignty over Jewish settlements and the strategic Jordan Valley in the occupied West Bank - territory the Palestinians want for a future state.

The Palestinians are boycotting the Trump administration over its perceived pro-Israel bias, but Pompeo said he would discuss Washington’s peace vision with Netanyahu.

“There remains work yet to do and we need to make progress on that - I’m looking forward to it,” Pompeo said.

With Palestinian leaders warning that a de-facto Israeli annexation move could imperil the already limited cooperation between the sides, there has been a spike in West Bank violence.

On Wednesday, Israeli forces killed a Palestinian teenager during a raid near the West Bank city of Hebron, the Palestinian Health Ministry said.

The Israeli military said soldiers opened fire after Palestinians threw rocks and fire-bombs at them during an arrest operation and that one soldier was slightly wounded.

A day earlier, a Palestinian stone-thrower killed an Israeli soldier who was taking part in an arrest raid near Jenin city.