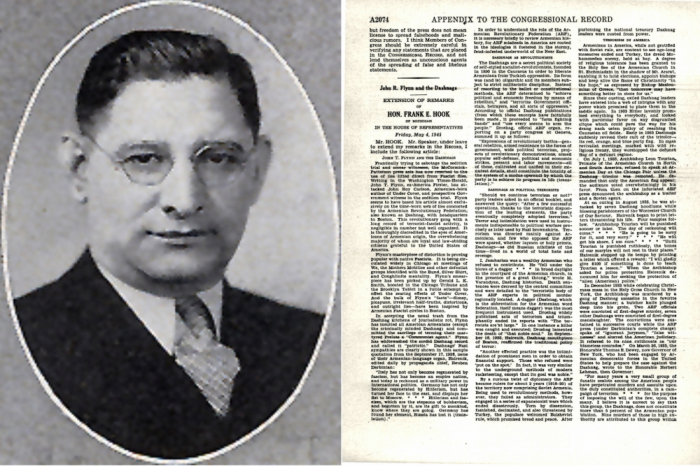 A new historical document exposing Armenian Dashnaks’ sympathies for Hitler and Holocaust has been unearthed in the archives of the U.S. Congress. The finding is a result of the research conducted by Azerbaijan’s Los Angeles-based Consulate General.

The Armenian Revolutionary Federation (ARF), also known as Dashnaktsutyun (in short, Dashnak), is an Armenian ultranationalist left-wing party founded in 1890. Today the party operates in Armenia, in Azerbaijan’s occupied Karabakh region and in countries where the Armenian diaspora is present, such as the United States.

Thus on May 4, 1945 a Member of the U.S. House of Representatives from Michigan, Congressman Frank E. Hook, introduced an article on Armenian Dashnaks’ sympathies for Hitler and the Holocaust, as well as their terrorist activities in the U.S. The article was included in the Congressional Record (official record of the Congressional proceedings and debates), and published by the U.S. Government.

The article describes the Armenian Dashnaks as a well-organized “revolutionary gang with a long record of terrorist-fascist activity”.

Giving detailed information about Dashnaks’ history, the article emphasizes that Dashnaks adopted terrorism as a political tool early in their existence, using both terror attacks and intimidation to silence their opponents and punish those who refused to donate to the party. The article mentions that Dashnak terrorists murdered many Armenian Americans in the U.S., who were opposed to them, including Archbishop Leon Tourian, leader of the Armenian Church in America, while he was “celebrating Christmas mass” in New York.

Exposing Dashnaks’ sympathies for Nasizm, the article gives a translated quotation from September 17, 1936 issue of their Boston-based newspaper Hairenik, which calls Hitlerism and Fascism as a “gift to mankind”.

Hairenik wrote: “The former Germany, defeated in the Great War, lacking popular unity, conducted an uncertain, confused, day-by-day policy which got her nowhere... And [then] came Adolf Hitler, after Herculean struggles. He spoke to the racial heart string of the Germans, opened the fountain of his national genius, struck down the spirit of defeatism....At no period since the World War had Berlin conducted so realistic, well organized, and planned policy as now, since Hitler's assumption of power. At no time the German thought had been so explicit, clear and rich as now.. . . And whatever outsiders may think concerning Hitlerism and Fascism as a system of Government, it is proved that .. . they have revitalized and regenerated the two states, Germany and Italy.”

Highlighting the Armenian Dashnaks’ rampant anti-Semitism, the Congressional record mentions several articles published by their Hairenik newspaper in August 1936 “extolling the Nazi regime, the myth of Aryan culture, and whitewashing Nazi persecution”. Calling Jews as “the most fanatical nationalists and race worshippers” and supporting the Holocaust, the Armenian Dashnak newspaper wrote: “Sometimes it is difficult to eradicate these poisonous elements when they have already struck deep root like a chronic disease. And when it becomes necessary for a people to eradicate them in an uncommon method, these attempts and methods are regarded revolutionary. During a surgical operation the flow of blood is a natural thing.... Under such conditions dictatorship seems to have the role of a savior.” So practically the Armenian Dashnaks called the Holocaust - the brutal murder of 6 million Jews by the Nazis - “a surgical operation to eradicate poisonous elements.”

The Congressional record also mentions the infamous Armenian Nazi collaborator Garegin Nzhdeh as the founder of an Armenian race religion called Tseghakronism (race worshipping), which, it says, primarily targeted young Armenians and was modeled after “Hitler Youth.” The document reveals that Nzhdeh sympathized with Hitler’s racial ideas in his speeches, who said the following in an article published by Hairenik Weekly, on April 10, 1936: “Today Germany and Italy are strong because as a nation they live and breathe in the terms of race.”

The document continues: “From this point on the dope of decadent race worship... was injected into young Tseghakron minds. Whipped into strict discipline, [they] urged never to marry non-Armenians lest it "pollute" the "purity of the Armenian race."

Stating that Nzhdeh and his Armenian Dashnak companions were spreading these racist ideas among the U.S.-born young Armenians, the Congressional record cites the following article published by Hairenik Weekly on Jan. 11, 1935: “I am preaching to you the Tseghakron Creed, worship of the race.... To me the highest act of individualism and of freedom is to follow the voice of my race. I am a Tseghakron. That means: I know my race. I believe in my race. I worship my race. I know that my race is great; that my race has given more to humanity than it has received from it. I am a believer in my race and, behold, I worship another deity, the blood of my race, in whose unspotted purity lies the future of our people. ... The Deification of the will of the Race—that is what the Tseghakron is fighting for.”

It is noteworthy that the Nazi collaborator Garegin Nzhdeh is considered today a national hero in Armenia. In 2016, the Government of Armenia unveiled his statue in the center of the nation’s capital Yerevan.

It should also be emphasized that the main Armenian lobby organization in the U.S. - the Armenian National Committee of America (ANCA) - is an affiliate and lobbying arm of the same Dashnaks.