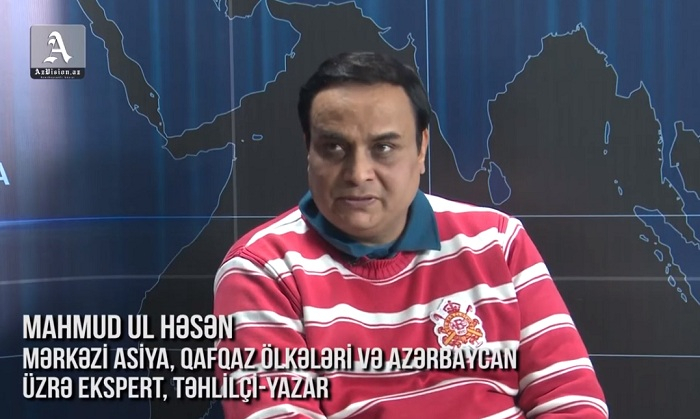 Azerbaijan Ilham Aliyev appreciates “the unity and solidarity of the Azerbaijanis of the world, their love towards the statehood of Azerbaijan, respect for the national and spiritual values, feelings and ideas related to belonging to the Azerbaijani people, attachment to a historical homeland.

Being a prominent regional expert on Azerbaijan and CIS, I consider Azerbaijan Diasporas as the cultural ambassadors-at-large to their motherland in foreign countries. They plough seeds of trust, harmony, peace, and human utility, the concept of co-existence, cooperation, coordination and collaboration.

They are the social bearers of their motherland to break the barriers of misconceptions and misperceptions out of hatred, genocide, bigotry, and prejudice. they are conveyors of bilateral trade, better political understanding and cultural diplomacy. They are real motivators of commercial diplomacy too.

They are the living bridges, and engine of the geopolitics of humans and humanity. They are the frontline soldiers of Azerbaijan, the country of origin to counter the propaganda of the Armenian government, its pressure groups and of course Armenia Diasporas around the globe.

Economics of Diaspora has become a hot topic in all the international organization dealing with issues of immigration, labour mobility, and transcontinental conflicts. the government of Azerbaijan appreciates their contributory role in terms of economic development, promotion of trade and foreign direct investment, creation of businesses ties, people to people reliable linkages, establishment of entrepreneurship, and transfer new knowledge and skills.

China, Korea, and India are among countries which have shown that Diaspora contributions can significantly help to transform economies. These countries underlined comprehensive policies, administrative structures and incentives to foster an enabling environment for mobilizing Diaspora resources (expertise, investments, entrepreneurship and corporate affiliations) around critical growth pillars. The government of Azerbaijan has a structured mechanism to explore the real socio-economic and geopolitical potential of its Diasporas.

The state committee of Azerbaijan is also working very hard to integrate human capital/potential, political economy, investments, entrepreneurship and financial skills and resources of Azerbaijan Diasporas living in more than 175 countries around the globe.

The state committee provides national unity, unification of all the Azerbaijanis in the world around common interests. The wellbeing of Azerbaijan Diasporas has been one of the strategic priorities of its foreign policy due to which the Azerbaijanis of the entire world accept the Republic of Azerbaijan as the offspring of national-historical progress, the symbol of national ambition and the motherland. Continuity of the state and national interests was a kind of revolution in social consciousness after the soviet period and a new stage of national progress.

The State Committee on work with Diaspora of the Republic of Azerbaijan is a governmental agency within the Cabinet of Azerbaijan in charge of establishing and maintaining contacts with the Azerbaijani Diaspora abroad and support the Azerbaijanis around the world in their efforts for national unity. the ministry is headed by Fuad Muradov.

The interpretation of the concept of “Azerbaijani Diaspora” is reflected in the law of the Republic of Azerbaijan “on state policy towards Azerbaijanis living abroad“. at the beginning of the 20th century, the flow of Azerbaijanis abroad became widespread.

The anti-Muslim and anti-Turk policy of tsarist Russia in the Caucasus was aimed at a deliberate weakening of the dominant position of the Azerbaijani population in the region. The policy of genocide, ethnic cleansing carried out by the Armenians in 1905-1906, 1918 was the result of such insidious strategic intentions.

Although the theme of ‘motherland and abroad’ has been one of the most popular themes in Azerbaijan folk literature but Heydar Aliyev was the first one to realize the utility and strategic importance of Azerbaijan diasporas in the economic deployment and national building and transmitted its role in the foreign policy. he geared up the concept of national-cultural unification of Azerbaijan diasporas. He termed them as an organised force to be used for widespread of soft power image, promotion of bilateral relations, and of course lobbyism.

On May 23, 2001, by decree of President of the Azerbaijan Republic Heydar Aliyev, the first congress of World Azerbaijanis was held on Nov 9-10 of 2001 in Baku city.

Battle of socio-economic integration, greater regional connectivity, geopolitical survival and supremacy of national narratives of Azerbaijan have been fought through the help of Azerbaijan diasporas in Washington, London, Paris, Brussels and many other important capitals around the globe. due to their active role Armenia could not able to tarnish the soft image of Azerbaijan.

Moreover, many research studies indicate that Azerbaijan diasporas played a decisive role in the signing of the Contract of the Century, recognition of Nagorno-Karabakh conflict and Khojaly massacre in the UN Security Council, the Council of Europe and many.

Being, a prominent regional expert of Azerbaijan and CIS, I highly value the immaculate role play by Azerbaijan Diaspora in creating a true image of Azerbaijan, forming objective knowledge about the true causes of the Nagorno-Karabakh conflict amongst foreign citizens, about the original tolerance and patriotism of the Azerbaijani people, defending the honor of their homeland, its right to territorial integrity and state sovereignty.

And today the Azerbaijani Diaspora is not just compatriots but it is a powerful social and political force capable of doing a lot in the places of residence and take care about vested interest of its country.

Azerbaijan Diasporas are strategic assets, precious human capital, icon of cultural diplomacy, pioneer of ethnic diversity, source of inflows of FDIs, JVCs and charities. They use to mitigate falsified propaganda of Armenia in the world. They are the representatives of Azerbaijan national narrative especially about Nagorno-Karabakh unresolved conflict.

To conclude I would like to suggest that there should be joint Pak-Azerbaijan Diaspora cooperation in terms of culture, economy, politics and greater regional connectivity. Exchange of scholars, experts and students would further strengthen the scope and utility of bilateral relations in the days to come. A joint Pak-Azerbaijan Diaspora State Committee about Kashmir & Nagorno-Karabakh would be a giant step towards more consolidation and solidarity of bilateral relations. In this connection, the CGSS, Pakistan being a prominent think tank about Euro-Asia would play an important role to integrate mutual befitting propositions to mitigate disseminated falsified media campaigns of India and Armenia on different issues.

The author is a board member of experts at the Pakistani Centre for Global and Strategic Studies (CGSS), expert on Azerbaijan and CIS