How to take a digital detox during the Covid-19 pandemic Amid the current crisis, we’re glued to our screens like never before. How can you cut phone time when hours with your devices are a necessity?

With social distancing protocols in place amid the Covid-19 pandemic, and hours of isolation taking a toll on our sanity, screens have been a saving grace for many.

Amid the crisis, views on Instagram Live doubled in one week, Facebook reported a 70% increase in Messenger group video calls and WhatsApp has seen a 40% increase in usage.

“Reaching for our phones is a common coping mechanism for the unknown,” says Doreen Dodgen-Magee, an psychologist based in the US state of Oregon and the author of Deviced!: Balancing Life and Technology in a Digital World. “We stay connected to our screens and the news that they provide, hoping that it will help us feel less anxious.”

A few weeks before the coronavirus crisis gripped New York City, I had deleted Instagram. I was tired of mindlessly scrolling through the app while standing in the grocery store queue or waiting on the subway platform. After a week without the app, I realised I wasn’t picking up my phone as frequently and it gave me a strange sense of freedom.

Then lockdown began. I felt completely disconnected from the world, and desperately needed to see how everyone else was coping. I downloaded Instagram again. This time, though, the app felt less of a time-waster, and instead more purposeful – it was as though it was OK to be on my phone because I was unable to physically access people. I wanted to connect with my friends across the world to see how they were dealing with quarantine. I needed advice from celebrity chefs on using leftovers, and information on which brands were making and donating masks.

But when I finally felt like I was gaining something positive from scrolling – all of a sudden, I wasn’t. In week two of lockdown, every time I reached for my phone to get a positive hit from Instagram, I was bombarded by a never-ending feed of anxiety-inducing news notifications.

As we’ve become increasingly glued to our phones – out of disconnection, boredom and necessity – many of us are feeling anxiety kick up from spending so much time in front of a screen. For Dodgen-Magee, this is problematic, as any anxiety we feel from “being constantly plugged in counteracts any positive impact of being informed”.

It’s not as easy as just turning off devices, however. When our entire worlds are on our phones right now, and our days revolve around our screens like never before, how do we lower digital anxiety?

We know we’re on our phones more than we’d like to be. But it’s hard to draw tech boundaries  when screens are suddenly both our connection to others, and even the way we keep our own spirits up. Zoom, online workouts, FaceTime and even mindfulness apps – they all require eyes glued to screens.

“Everyone is worried about screen time [right now]. Every Sunday [when Apple releases its screen time report], I see a whole load of tweets and comments from people on social media saying how appalled they are that they’re spending 12 hours a day on a screen,” says Tanya Goodin, UK-based founder of the digital detox movement TimeTo Log Off and author of Off and Stop Staring at Screens. “Obviously, the current situation is very different, but I still think a lot of the same principles apply.”

To reduce tech anxiety, Goodin suggests distinguishing a firm boundary between screen time that is helpful and screen time that is harmful. It’s okay to spend time on social media if it’s being used for positive purposes like workout videos, museum tours or baking lessons. “If we’re doing it because we’re bored or anxious, it’s not helpful,” says Goodin. The same goes for news checking. “People are saying they want that reassurance, but it’s becoming a real problem and increasing anxiety.” 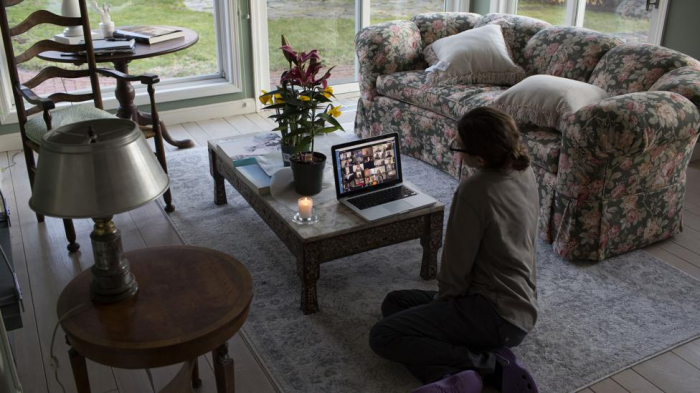 Like our phones, video Zoom calls on our computer provide social connection and news during the pandemic, but they still force us to be glued to screens (Credit: Getty Images)

Even as we try to create boundaries and habits to ease tech anxiety, it’s harder than ever to foster healthy practises when our work and home life have suddenly rolled into one.

Goodin recommends people set morning and afternoon routines. “When you no longer have a commute, you no longer have the bookends to your days. We have to create those.” To help draw distinctions between work and play, Goodin also suggests people use different devices for different activities. “Use your laptop as your work device and your phone as your play device. So, you put one device away when you’re on the other.”

Psychologist Dodgen-Magee suggests seeking out engaging and meaningful content instead of bingeing on whatever is available. Luckily, in the midst of the pandemic, helpful social media content is more ubiquitous than ever.

Cookbook author and chef Alison Roman, who has been dubbed the “prom queen of the pandemic” due to her helpful cooking content and videos on social media, is one of many generating quality content.

“I’m happy to have an actual place where I’m providing a service,” says Roman, who has more than 500,000 followers on Instagram and 400,000 on Twitter. “I’ve never been a person that creates content that people can’t actually use in real life.” Roman has demonstrated useful tips to create her recipes on the New York Times’ YouTube channel for months, but in recent weeks she’s taken to Instagram to offer up advice on what to use if you don't have the required ingredients available in quarantine.

Although Roman has seen increased engagement on her social media channels, she’s unsure whether it’s because of her popularity or people’s sudden interest in cooking amid the pandemic. “More people are cooking and more people are asking questions,” says Roman, who has been providing feedback on people’s kitchen quandaries. On Instagram and Twitter, she’s invited followers to ask questions, which can be anything from how to crisp mushrooms to whether buttermilk is still good after the sell-by date.

Although video calls currently seem to run our lives – for meetings, live workouts, friend gatherings and even dinner parties – Zoom burnout is real. To mitigate the impact of screen anxiety, it’s important to not forget the other ways to communicate with others.

“Think about some of the alternatives. Voice calls – they still exist,” says Goodin. “A one-to-one phone call is a far richer experience than when you’re shouting at ten people simultaneously [on Zoom].”

“There’s a lot of stuff we can do that doesn’t involve a screen,” says Goodin. We can get off our phones by subscribing to print magazines, or working on a physical puzzle. Many are also turning to books. “I’ve noticed a lot of people talking about a boom in escapist fiction – books that aren’t about a pandemic, really good stories you can get lost in.”

Some bookstores are seeing the positive effect of people upping their reading time. Books Are Magic, a Brooklyn-based bookstore owned by author Emma Straub, has experienced a major increase in book sales in the past couple of weeks.

“Our numbers are approaching what we see during the holidays, which is to say, our highest sales of the year,” says Colleen Callery, the store’s marketing and communication manager, who explains the increase by people reading more, and because retailers like Amazon have deprioritised book shipments.

Last weekend, I took two hours out of my Saturday to kick back on the couch and finish a novel. I turned off my phone and allowed myself to be transported to a fictional, non-coronavirus- related world, despite the whirring sirens outside my window. That night, before sending a few texts, I set turned off access to any of my phone apps for 12 hours, then switched off my phone and dumped it in another room.

I felt that same sense of freedom, just like when I’d  deleted Instagram a few weeks earlier. That’s when it sunk in: I don’t have control over much at the moment, but I can turn off my screen.