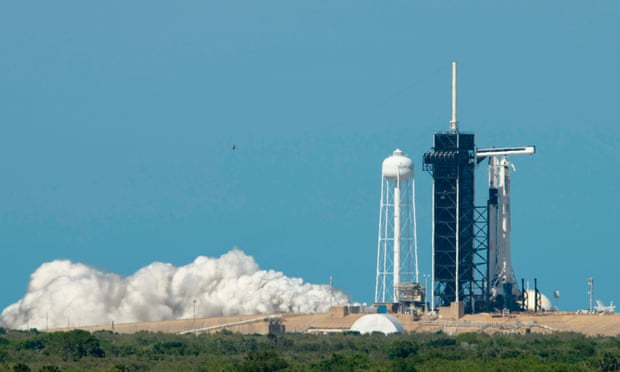 Elon Musk’s SpaceX company hopes to make history on Wednesday by launching the first astronauts into space from US soil in nine years, as the billionaire takes the next step in his dream to commercialise space travel, the Guardian reports.

Donald Trump will be among the spectators at Kennedy space centre in Florida to witness the launch, which has been given the green light despite the coronavirus lockdown.

At 4.33pm (2033 GMT) on Wednesday, a SpaceX Falcon 9 rocket is due to take off from launchpad 39A – the same one the Apollo astronauts used to get to the moon – with the Crew Dragon space capsule on top of it. It is a demonstration of the new “taxi” service Nasa has agreed to buy from Musk’s firm.

The Nasa astronauts Robert Behnken, 49, and Douglas Hurley, 53, both veterans of space flight, completed the final rehearsal of the mission on Saturday. The launch on Wednesday will be the first astronaut launch from Kennedy space centre since the last Nasa shuttle flight in 2011.

The space agency’s commercial crew programme, aimed at developing private spacecraft to carry American astronauts, began under Barack Obama. But Trump sees it as a symbol of his strategy to reassert American domination of space, both military – with his creation of the Space Force – and civilian. He has ordered Nasa to return to the moon by 2024.

Nasa has awarded SpaceX more than $3bn (£2bn) in contracts since 2011 to build the spacecraft.