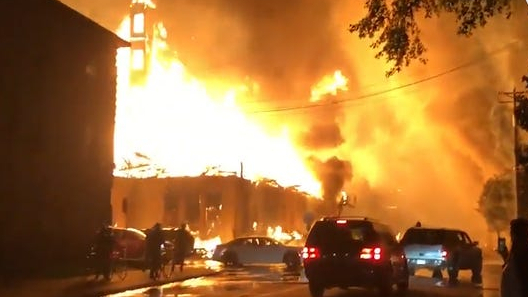 Minnesota Governor Tim Walz has earlier activated the National Guard amid protests in Minneapolis over the death of George Floyd, an unemployed African-American resident who lost his life on Monday after having his neck pinned to the ground by a police officer.

Protesters reportedly broke into the Minneapolis police department’s 3rd Precinct building and set it on fire on Thursday as unrest over the death of George Floyd shows no sign of abating for a third night.

Protests broke out in Minneapolis on Tuesday, a day after Floyd's death in a confrontation with police was caught on camera. In the video, Floyd, a 46-year-old African American man, is tackled by several police officers, and one of them kneels on his neck for several minutes as Floyd is pleading that he can't breathe. The police were responding to a call by a local grocery store, which claimed the unemployed nightclub bouncer had attempted to pay using a counterfeit banknote.

After the video of the incident emerged online and quickly went viral, protests erupted, with thousands of people smashing the local precinct where the responding officers worked, and local retail stores were looted.

Meanwhile, Minnesota Governor Tim Walz activated the state's national guard “to help protect Minnesotans’ safety and maintain peace in the wake of George Floyd’s death” on Thursday amid continued unrest in the state capital of Minneapolis.

​On Wednesday, US President Donald Trump ordered the FBI and the Department of Justice to investigate the incident, adding that justice will be served. In addition, US Attorney General William Barr and FBI Director Christopher Wray gave Trump a full report earlier on Thursday about the incident that led to Floyd's death.