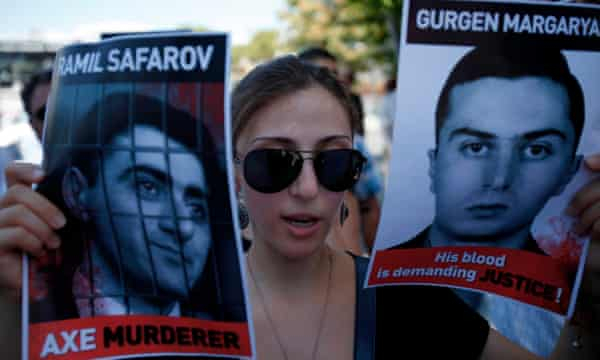 Azerbaijani ambassador Tahir Taghizade responds to a recent article "Relatives of Armenian axed to death by Azeri officer call for justice" published on the Guardian.

Nagorno-Karabakh is not a “disputed territory” as described in your article about the case of Ramil Safarov (Relatives of Armenian axed to death by Azeri officer call for justice, 25 May). It is an integral, internationally recognised part of Azerbaijan which, together with seven other regions of Azerbaijan, has been occupied by Armenia for more than 25 years.

More than a million Azerbaijanis became refugees and internally displaced persons (IDPs). In 1993 the United Nations security council adopted four resolutions demanding the immediate and unconditional withdrawal of Armenian troops from the territory of Azerbaijan. These resolutions are yet to be implemented.

Ramil Safarov was forcibly expelled as a child from his home town, Jabrayil, which is also under Armenian occupation. His extradition from Hungary – where he had already served eight years in prison – to Azerbaijan was done on a legal basis, and it is the constitutional right of the head of any sovereign state to pardon its citizens. While Azerbaijan is calling for justice for its refugees and IDPs, Armenia employs all instruments and platforms to solidify its occupation of Azerbaijan’s territories.

Tahir Taghizade
Ambassador of the Republic of Azerbaijan to the UK