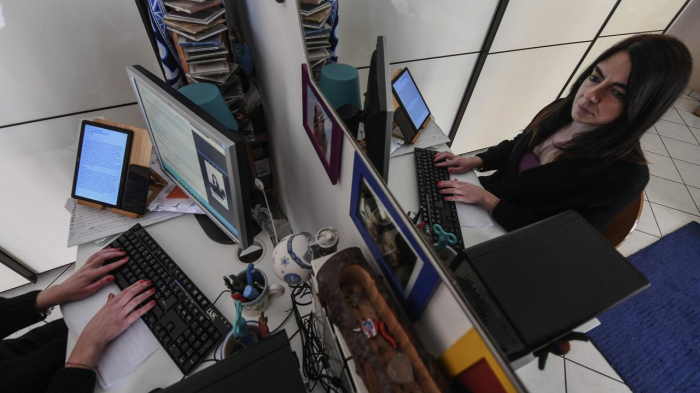 As we switch to greater virtual working, some of us will find it easier than others. But there are ways to adapt.

Many workers around the globe have been forced to embrace the promise and challenges of virtual teamwork – almost overnight.

Of course, many companies, especially in IT, have been distributed for years. But many others are more used to working in person and haven’t had the same time to cultivate a healthy and effective remote working culture. Getting into a rhythm of remote collaboration can be difficult, especially when bringing together many different personalities and aptitudes.

The only choice? Adapt fast.

Working at a distance is a challenge at the best of times. Without the social nuances of face-to-face contact, and no chance to check something with Derek or Sheila in another department, virtual teamwork places greater emphasis on communication and organisation.

Can teams quickly rise to the occasion and keep working well? It’s likely.

Several years ago, Sandy Staples, a professor at Smith School of Business at Queens University, Ontario, and his colleagues conducted a meta-analysis of the evidence from 80 studies looking at what virtual working does to teams. The bad news is that over the short-term (a day or less), newly formed virtual teams experienced more negative outcomes than face-to-face teams, including more team conflict, lower satisfaction, less knowledge sharing and poorer performance. The good news is that this mostly didn’t apply to teams that had worked together for longer, presumably as they adapted. So, even if newly remote teams are experiencing teething problems as they transition, the research suggests they will improve and adapt over time.

Staples explains another reason for optimism in the current circumstances – it’s easier for an established team to adapt to virtual working than it is to form an effective virtual team for scratch.

“[E]ven though the pandemic has made teams adopt virtual work overnight, they would not be newly-formed teams. That implies that they would have knowledge about their teammates, understand the interdependencies of their tasks, etc. Therefore, I would speculate that the causal mechanisms that created the challenges in the short-term teams in the studies we examined would not be the same in our Covid-19 virtual work world.”

Still, even though teams as a whole might be well-primed to adapt to virtual teamwork, aptitude for change may be different on an individual level.

At least at first, being plunged into the world of team video meetings and endless relay chats will be a challenge even for team members who know each other. But, at an individual level, some of us will find it easier than others. A lot, it seems, boils down to whether you’re the kind of person who enjoys new challenges and is prepared to adapt to doing things differently.

High scorers on openness were the happiest to embrace virtual teamwork – presumably because of their general willingness to experiment with new ways of working
Consider the findings from a study conducted by Andy Luse, a management scientist at the Spears School of Business at Oklahoma State University. He and his colleagues measured the personality traits and thinking style of more than 150 business students, and then assessed their preferences for virtual teamwork.

Given that virtual work means the loss of chance encounters in the corridor, or camaraderie-building chats around the water-cooler, you might imagine that the introvert-extrovert personality dimension was most important – after all, it’s well-established that extroverts thrive with chance for plenty of face-to-face socialising. But it was actually the key trait of ‘openness’ (which is related to being imaginative and having a love for trying out new things) that was most important. High scorers on openness were the happiest to embrace virtual teamwork – presumably because of their general willingness to experiment with new ways of working.

While less important than openness, one’s level of introversion or extroversion was also a significant factor. Overall, Luse says that although extroverts prefer virtual teamwork compared with working alone, they may struggle with the current situation of enforced remote work in the absence of any face-to-face contact.

“[Extroverted] individuals would much rather work face-to-face as compared to virtually, which will lessen the energy they get from the interaction,” says Luse. “Conversely, introverts expend energy with social interaction, so while they are more apt to work alone well, they are also better at adapting to a virtual environment given it involves less face-to-face interaction and is thereby less taxing mentally.”

Aside from personality traits, Luse observed that your favoured decision-making style is also relevant. “Those who like to make quick decisions prefer virtual teams more than those individuals who like long conversations,” he says. “Given the less rich environment of virtual teams, decisions are typically more abbreviated, which appeals to these types of individuals.”

This chimes with a finding from a recent German study that surveyed hundreds of professionals with expertise in either virtual or traditional teamwork, about which of the eight “great competencies” are most important for their way of working. Notably, the virtual teamwork experts identified two as being more important than the experts in more traditional teamwork: the Leading and Deciding competency, followed by the Analysing and Interpreting competency. The former incorporates decision making, but also acting with confidence and with one’s own initiative; the latter is largely about writing and expressing oneself clearly and accurately.

While some of us might be better adapted to the new remote ways of working than others – confident, articulate and decisive introverts might particularly have a chance to shine – there’s a rather unnerving flip side. All of those hours spent jostling for influence in virtual meetings might even be changing us – and not necessarily for the better.

Although research around this isn’t deep, there some initial findings suggest that adapting to this intense period of virtual collaboration might be altering our personalities. Earlier this year, William Swart and Judy Siguaw at East Carolina University studied the experiences of 58 business students engaged in five weeks of intense virtual teamwork. Comparing the students’ personality trait scores before and after the period of virtual working, Swart and Siguaw found that, on average, the students came out scoring lower on one of the main personality trait known as ‘agreeableness’ – essentially, how warm and friendly and trusting of others you are.

The researchers speculated this might have been a consequence of the students becoming more practised at getting their own views across in virtual meetings – it is, of course, difficult to have natural turn-taking in video conversations, and it’s much easier to be left out of the conversation altogether. The students also grew more extroverted and open-minded, which Swart and Siguaw explained as “the students learning to be more vocal and to verbally express themselves so that the team can reach its overarching objectives”.

Perhaps most intriguing, though, was that the pair observed a kind of convergence effect, so that people with more extreme personality scores (such as low agreeableness or strong extroversion) came out of the experience nearer the average.

Swart says, “The way that I see that is that everybody's in this boat together, and if they don’t compromise and work together and so on, then they [realise] they are not going to meet their goal – with dire consequences.” He’s continuing to collect personality data, so in the near future he will be able to look for changes specifically brought on during the period of lockdown.

Optimising work for all

The idea of everyone melding into a similar, shoutier personality type as they vie for influence on their webcams is not particularly appealing. Fortunately, there are established ways to cultivate positive team cultures, even at a distance.

“Essentially, some of the things that happen in an ad-hoc, informal way when we are face-to-face need to become more structured when we operate virtually,” says Staples, giving the examples of a virtual team manager taking the time each day to check in informally on other team-members, and team-members scheduling time for informal virtual coffee chats.

Some of the things that happen in an ad-hoc, informal way when we are face-to-face need to become more structured when we operate virtually – Sandy Staples
As well as scheduling time for virtual water-cooler moments, it’s also important to take some early simple steps, such agreeing how you’re going to work together (including which online communication tools to use) and what the rules of engagement will be, such as letting different people take turns to lead a meeting.

A specific routine that teams could introduce is the ‘daily stand-up meeting’. These are practised widely by so-called ‘agile teams’, which have their roots in software development where the goals and demands of the team are always evolving. It involves a short meeting – no more than 15 minutes – during which each member says what they did yesterday, what they’re doing today and outlines any obstacles in their way. “This is an effective coordination mechanism and it also allows the team to identify issues that need to be dealt with,” says Staples.

The overall aim of stand-up meetings, informal virtual coffee chats and any other new routines that you introduce should be to help people “feel that they are part of a team and that they support each other, so people are willing to ask for help, and know they will get it, and are willing to share both good and bad news”, says Staples.

All this will help to increase what organisational psychologists call ‘psychological safety’ – mutual trust between team-members and the comfort of knowing that you will be forgiven if you slip up. Mutual trust among members is a hallmark of any kind of high-functioning team, virtual or not, and will be vital for our teams to thrive in the challenging months and years ahead.