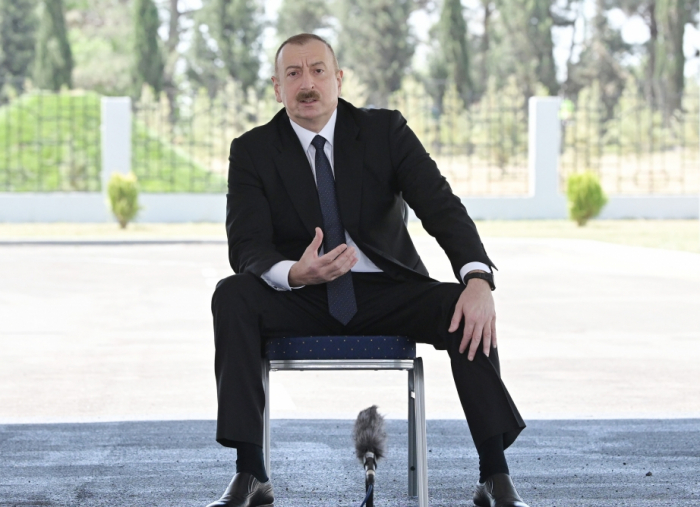 The head of state made the remarks on Wednesday during a meeting with a group of athletes after attending the inauguration of Tartar Olympic Sports Complex.

“It is no secret that Armenia is a terrorist state, which has shown it repeatedly, even committing terrorist acts against its leaders,” the president said.

President Aliyev recalled that 20 years ago, many members of the Armenian leadership were killed on an attack on the country’s parliament, and the crime has not yet been solved.

“Everyone is well aware that who ordered the crime. However, they are trying to cover up this crime, because their terrorist nature exists today,” he said.

Monuments to the Nazis are erected in Armenia, the head of state said, adding. “Reconstruction and landscaping work is underway in Azerbaijan, social facilities, such as magnificent Olympic centers, hospitals, schools, roads are built in each city, and gasification in the country continues. In poor Armenia, the population lives in poverty, but they erect a 6-meter monument to the Nazis. The man whose collaboration with Hitler has been documented. The man who said during the war that ‘He who dies for Germany dies for Armenia’. The man who was jailed for 25 years by the relevant bodies of the Soviet Union. A 6-meter monument to that person was erected in Armenia, and today, the country’s leadership presents him as a “hero.” What does this show? This shows that the Armenian government can change, but the terrorist and fascist nature of this country remains unchanged, and everyone should know this. The whole world should know this.”

“Thanks to our efforts, all the leading international organizations have made the relevant statements calling for the settlement of the conflict within Azerbaijan’s territorial integrity. The declarations of strategic partnership, which we have signed with many countries in a bilateral format, express support for Azerbaijan’s territorial integrity and affirm that the conflict must be resolved based on these principles,” he concluded.