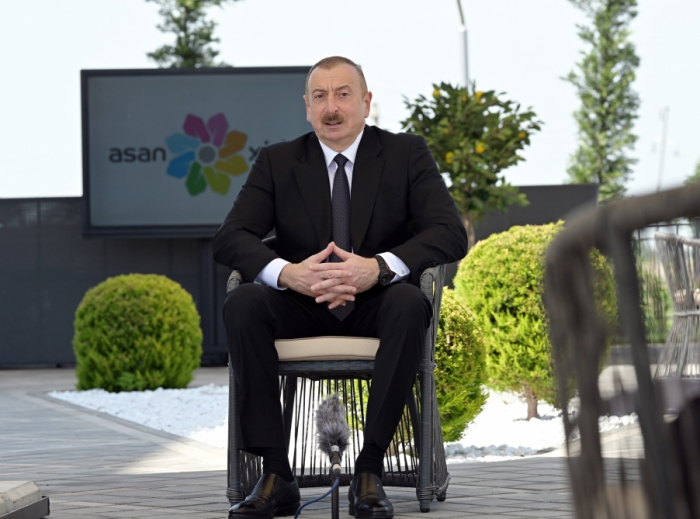 The president made the remarks on Wednesday during a meeting with ASAN volunteers after the inauguration of the “ASAN Həyat” complex in Aghjabadi, AzVision.az reports.

“A modern, beautiful “ASAN Həyat” complex, established in Aghjabadi district upon my instructions, was commissioned today. Both the exterior and interior design of the complex is very beautiful. What’s the most important is that the complex will render 320 services to citizens.  About 800,000 people living in this region can take advantage of these opportunities,” he said.

The head of state described the opening of another “ASAN xidmət” center is a very significant event.

“We have managed to increase the number of “ASAN xidmət” centers to 19 in a short period of time, and this process is going on,” President Aliyev said. “We are currently planning to build eight more centers. Some of them are almost ready, and some are under construction. Thus, “ASAN xidmət” centers will cover the whole country. It fact, that was our plan. When we made this initiative, my decisive opinion was that if this practice would be successful – I didn’t even doubt it – “ASAN xidmət” centers should be built throughout the country and quality services should be provided to all citizens. We are carrying out this activity consistently. When I launching the center today, I witnessed that since its commissioning, ASAN centers have received about 38 million appeals. A 99.4-percent approval rating by citizens is the fact that best reflects these centers’ activity. Almost 100 percent of our citizens are satisfied with the activity of these centers. This is natural. In fact, our intention and desire is to offer a very beautiful, comfortable and transparent service. We have managed to achieve this.”

The head of state noted that “ASAN xidmət” centers are an intellectual product of our country.

“I have said once and want to reiterate that we have already begun exporting this intellectual product. Several countries have already signed agreements with us regarding the establishment of “ASAN xidmət” centers. These centers have already been commissioned in some countries. This is our national brand. The launch and successful operation of these centers is a very good result of the policy pursued in this area. “ASAN xidmət” is an innovation, and at the opening of each new center, including today, I receive new innovative projects. Then the vast majority of these projects are realized,” he added.

President Aliyev stressed that the activity of “ASAN xidmət” has given a great impetus to the development of innovations in Azerbaijan.

He expressed satisfaction with the fact that the vast majority of those working in these centers are young people.

“According to the information provided to me, over 200 workers and 45 volunteers will serve in the “ASAN xidmət” center in Aghjabadi. The volunteer movement began in Azerbaijan with “ASAN xidmət”. Until that time, there was no volunteer movement. After “ASAN xidmət”, volunteers were involved in other areas. In particular, volunteers have rendered great service in major international sports competitions held in our country - the European and Islamic Solidarity Games. Without volunteers, we could not hold these big competitions. I have instructed state agencies and companies, as well as ministries to involve volunteers in their activities. Because today’s volunteers are the leaders of tomorrow. It is no coincidence that I declared 2020 a ‘Year of Volunteers.’

The head of state said that with their activities in “ASAN Həyat” and “ASAN xidmət” centers, young people render great service to the Motherland.

“Of course, there is a high level of professionalism here. In these centers, all citizens are respected, their problems are solved promptly and transparently. Therefore, we are justly proud that “ASAN xidmət” is Azerbaijan’s national brand. It is no coincidence that the UN praised the activities of “ASAN xidmət” and presented a special award. Of course, the promotion of this service on a global scale also plays a role in shaping a correct image of our country,” the president concluded.