Crowds gather for coronavirus tests in Beijing amid new outbreak 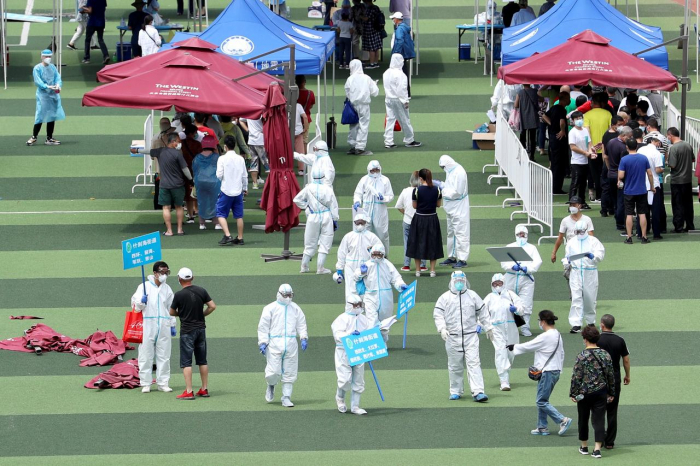 On a sweltering Beijing afternoon, police vehicles blocked roads near the Guangan Sports Center complex and security guards warned the public to stay clear as residents filed in for testing amid the city’s COVID-19 outbreak, Reuters reported.

Staff in white PPE suits with megaphones yelled directions from gates, telling the crowds to gather in groups according to neighbourhood and avoid touching each other.

“We reported ourselves and they told us not to leave the house until the designated time,” said a 38-year-old woman surnamed Lu, who had visited the wholesale market at the heart of China’s new outbreak early in the month and was among the nearly 100 residents at the centre on Monday afternoon.

“It’s possible to meet with a sick person in the crowd, but there’s nothing to be done...everyone must be tested,” she said.

A test organiser who asked not to be named told Reuters that they had carried out thousands of tests, showing a list of several dozen names from one neighbourhood in Beijing’s west that had been flagged by local authorities.

The person said the tests were free of charge, as residents filed onto a soccer pitch to undergo oral nucleic acid swabs.

The site is one of several where over 10,000 people are expected to be tested following the outbreak that has paralysed pockets of the Chinese capital after almost two months of reporting no new locally-transmitted cases.

The tests began on Saturday and have expanded in a response that officials call a “wartime emergency.”

Almost 80 cases were discovered in the sprawling Xinfadi market in Beijing’s south, which was closed early on Saturday before health officials fanned out across the city to trace people who have links to the market or have recently been there.

Mass testing and rapid lockdowns are becoming normal to contain coronavirus flare-ups in China, which had largely quashed the spread of the virus since its February peak.