How do we tackle the rising tide of pandemic-driven plastic waste ? 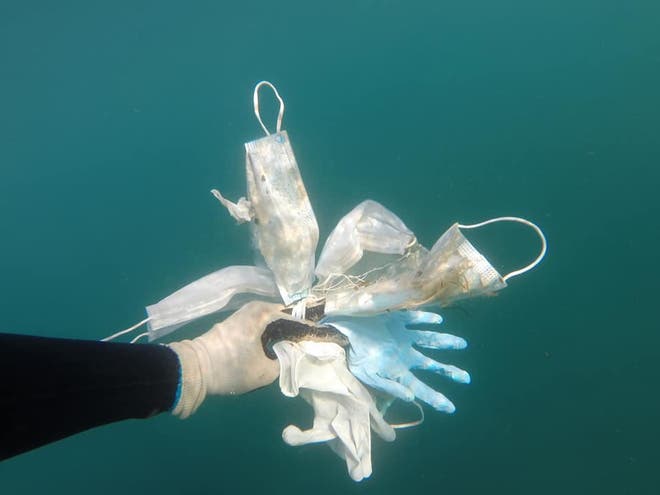 The coronavirus pandemic is generating a rising tide in all things plastic.

Some increases have been driven by necessity: Personal protective equipment (PPE) of masks, gloves, gowns and visors have been crucial in protecting medical staff and other frontline workers from Covid-19 transmission.

Other spikes in single-use plastics are a reaction to navigating a new world of potential risks. Plastic bag bans have been reversed or delayed in some countries and in US states due to hygiene fears over reusable alternatives.

Many restaurants and fast-food chains have swung to take-out operations, bringing with them a mountain of disposable utensils and containers. Major players, like Starbucks, Dunkin and McDonald’s, have put a hold on bring-your-own reusable cups.

With the price for virgin, or non-recycled, plastic now at historic lows and oil demand reduced, environmentalists fear that producers will pump out cheap plastic to stoke demand and soak up some of the global glut of cheap oil and gas. Plastic wastepiles are mounting in parts of Asia and with some recycling firms struggling to operate, plastic pollution looks set to rise.

“The notion that things can be thrown away is a myth,” World Resources Institute (WRI) says. “There is no ‘away’ for damaging pollutants to go where they will not harm ecosystems, plant and animal health and, ultimately, human health.”

Some 13m tonnes of plastic ends up in the ocean every year – the equivalent of a garbage truck every minute – and if current trends continue, plastic manufacturing will make up 15 per cent of greenhouse gas emissions by 2050, according to a 2019 study.

So, where’s it all coming from and what can be done to tackle the plastic glut?

PPE: Improperly disposed of masks and gloves are not only a public health risk but an environmental threat, particularly for marine life.

Although the World Health Organisation recommends fabric masks for social distancing, there has been increased use of latex gloves and surgical masks, some made with non-woven fabric that can’t be recycled.

Environmental NGO, OperationMerPropre, last month found dozens of masks and gloves floating off the Cote D’Azur in France during a clean-up operation.

In February, OceansAsia was an early harbinger of the wave of waste that was coming.

“The way I see these masks in the environment is just another addition to the ever-growing marine debris crisis our oceans are facing. No better, no worse, just shouldn’t be there in the first place. I’m waiting to hear of the first necropsy that finds masks inside a dead marine animal. It’s not a question of if but when,” OceansAsia co-founder, Gary Stokes, told The Independent.

Maria Algarra, founder of environmental group Clean This Beach Up, was so concerned about the up-tick in plastic pollution that she started a hashtag campaign, #TheGloveChallenge, to raise awareness. Ms Algarra told The Independent that she had received 1,200 pictures of jettisoned plastic gloves – some from her hometown of Miami but also from as far afield as New Zealand.

Plastic wreaks havoc on marine ecosystems, breaking down into tiny pieces. Microplastics have invaded all depths of the world’s oceans and a recent study found there may be double previous estimates.

At least 600 wildlife species are impacted by ocean trash, according to Ocean Conservancy. Many fish species consume plastics debris by confusing it for real food, which then enters our food chain through the seafood market.

David B. McGinty, global director of the Platform for Accelerating the Circular Economy (PACE), told The Independent that the pandemic has turned products like PPE into everyday items but offered an opportunity for innovation.

Medical Waste : Hospitals and clinics produce vast quantities of waste, averaging around 30lb per bed, per day. Around a quarter of that waste is plastic.

While no one expects doctors and nurses to battle a pandemic without effective protection, there are fears that more waste is coming.

“Once the supply chain is restored, I expect there to be a massive push to make everything disposable, out of fear of infection transmission,” Dr Jodi Sherman, an epidemiologist professor and director of a health care sustainability initiative at Yale University told the New York Times.

Shopping : After months of lockdowns, shuttered businesses and social distancing, large chunks of the population spending more time at home has driven a boom in online shopping. In the US, e-commerce was up almost a third at the height of lockdowns compared to 2019. Amazon is hiring tens of thousands of new workers to cope with demand.

With more online retail comes more packaging, both plastic and paper. In some areas, recycling operations have struggled to keep up with increased volumes while others have been forced to lay-off staff or suspend curbside pickups to protect sanitation workers' health, Waste Dive reported.

Some plastic bag bans have been put on hold or reversed over fears that reusable bags risk spreading Covid-19. In March, the US Plastic Industry Association wrote a letter to the Department of Health calling for a reversal of plastic bag bans, arguing that single-use plastic was the safest way to transport and package food.

New York state’s ban took effect on March 1 but enforcement was postponed during the pandemic. It’s been a similar story in states like New Hampshire, California, Maine and Oregon, and other localities.

Carole Excell, WRI’s director of Environmental Democracy Practice, said that there were “alarming signals” of a shift to single-use plastics, compounded by gaps in policy.

“I think it’s been very reactionary. We’re thinking short-term about the immediate need, which is understandable, but we’re not thinking long-term consequences,” she said.

With virgin plastic becoming so cheap, she questioned whether there would be “a real focus on using recyclables or investing in recyclables” in a pandemic-ravaged economy.

Dining out : With many in the restaurant sector embracing the to-go market to stay afloat, a mountain of plastic utensils, containers, cups and boxes has followed.

Greenpeace warned of an “ecological disaster” if governments force widespread disposables on restaurants along with the potential impacts on low-income and minority communities.

“The same fossil fuel companies that are destroying our climate are hoping to increase profits by churning out more plastic. Plastic production hurts low income communities the most, especially the communities of color already dying at higher rates during the pandemic," Greenpeace USA Oceans Campaign Director John Hocevar said.

Where do we go from here?

Some local and national governments plan to tackle plastic waste as it hits the streets. France is looking to increase littering fines to €135 ($151) to combat face mask and glove pollution. Other authorities, like in Massachusetts, were threatening to enforce local littering by-laws.

A number of projects provide solutions to hospitals and clinics to help reduce their environmental impact. Health Care Without Harm has created a toolkit to fight waste in hospitals, including a step-by-step guide for a plastic audit. Some suggestions, like water fountains and reusable drink cups in canteens, seem outdated in a post-pandemic world. But others – switching from plastic to paper straws; tampons with cardboard applicators and removing personal care items with microbeads from patient packs - could still be effective.

The well-documented shortage of disposable PPE that many medical workers have faced makes it a timely moment to explore reusable options. Ronald Reagan UCLA Medical Center saved over $1.1m and diverted 297 tons of waste after switching to reusable isolation gowns in 2012, according to a Practice Green Health report.

Mr McGinty said that while the pandemic has highlighted the importance of plastic in some applications, like in the medical field, innovation was needed and "design was, and remains, critical”.

He pointed to early expectations that a huge increase in the production of ventilators would be needed for coronavirus patients.

“Instead there was an increase in refurbishment of ventilators,” he said, adding that companies like Philips Healthcare are part of a growing market in used and refurbished medical equipment.

At the other end, recycling is falling far short of its goals. “It’s clear around the world that the expectations of what could be recycled, and what is actually being recycled, are not being met,” Mr McGinty said.

Ms Excell said that countries should focus on building out recycling industries where there has been a lack of investment.

“People say recycling isn’t the answer and that the answer is production. At any other time, I would agree but in a pandemic it’s very difficult to argue against producing more plastic when many people need different types of products, including for medical services.

“I don’t think any country has really figured out how to invest enough in the recycling industry so that we’d at least be able to capture more plastic than we’re currently doing.”

At present, only 9% of all plastic ever produced has been recycled, and the majority is only “downcycled” into items that also eventually end up in landfills, CNBC noted.

“If we recognise we’re going to have a lot more plastic, and different types that are difficult to recycle, there are solutions to that,” Ms Excell said.

She called for gathering and collating scientific and other evidence so that governments and the private sector were able to make the right decisions on safe alternatives.

“There are ways to work on behavioural change, providing guidance and support for people so they know what to do," she said.

“Everybody is already washing their hands differently. Why would it be so difficult to say, ‘Wash your reusable bags and here's how to do it?’

“I think there are simple solutions that we’re just not thinking about and that we’d rather revert to our old habits.”

At a macro-level, Mr McGinty said the pandemic has exposed gaps in supply chains, and figuring out an optimum balance of global and local networks was needed.

“Currently the global trading system has inconsistent policies and regulations that do not allow for the efficient movement of goods," he said.

“We need to use some plastics more efficiently and others need to have the right infrastructure in place to make sure that material is reused to its highest value, for the longest period of time.

“We need more of a smart approach to plastics and a realistic expectation that matches what consumers want with what companies can do, and what countries need to provide to enable those two things.”

Momentum had been building pre-pandemic for a shift to a circular economy, aiming to wind down consumption of the planet’s finite resources.

There are signs of optimism: The European Commission is pressing on with its single-use plastics ban despite pressure from lobbyists.

The New Plastics Economy initiative, at the Ellen MacArthur Foundation, has not seen any of the 200-plus businesses drop out of recycling targets that they signed on to for the next five years, according to Ethical Corp. In fact, hundreds more companies were reportedly showing interest in pledging.

Waste charity, WRAP, which leads the European and UK Plastics Pacts to making 100% of plastics packaging reusable, recyclable or compostable by 2025, has seen similar commitment.

For others, though, it is undeniable that a crisis is looming. “We will see a flood of plastic waste. Even if that wave isn’t sustained, the plastic that gets pushed out now will pollute the planet for decades,” Carroll Muffett, head of the Center for International Environmental Law, told Reuters.