Speculation about a future coronavirus vaccine is ramping up and social-media posts from anti-vaccination campaigners are gaining more traction online.

Why the microchip rumours don't stack up

First up, a conspiracy theory about vaccines that has spanned the globe.

It claims that the coronavirus pandemic is a cover for a plan to implant trackable microchips and that the Microsoft co-founder Bill Gates is behind it.

We've found no evidence to support these claims.

The Bill and Melinda Gates Foundation told the BBC the claim was "false". 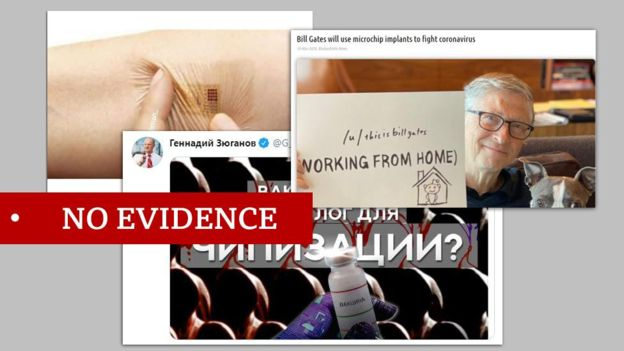 The head of the Russian Communist party this week said that so-called "globalists" supported "a covert mass chip implantation which they may in time resort to under the pretext of a mandatory vaccination against coronavirus".

He didn't mention Mr Gates by name but in the US, Roger Stone, a former adviser to Donald Trump, said Bill Gates and others were using the virus for "microchipping people so we can tell 'whether you've been tested'."

A new YouGov poll of 1,640 people suggests that 28% of Americans believe that Bill Gates wants to use vaccines to implant microchips in people - with the figure rising to 44% among Republicans.

Rumours took hold in March when Mr Gates said in an interview that eventually "we will have some digital certificates" which would be used to show who'd recovered, been tested and ultimately who received a vaccine. He made no mention of microchips.

That response led to one widely shared article, under the headline: "Bill Gates will use microchip implants to fight coronavirus".

The article makes reference to a study, funded by The Gates Foundation, into a technology that could store someone's vaccine records in a special ink administered at the same time as an injection.

However, the technology is not a microchip and is more like an invisible tattoo. It has not been rolled out yet, would not allow people to be tracked and personal information would not be entered into a database, says Ana Jaklenec, a scientist involved in the study.

The Bill and Melinda Gates Foundation says: "The reference to 'digital certificates' relates to efforts to create an open-source digital platform with the goal of expanding access to safe, home-based testing." 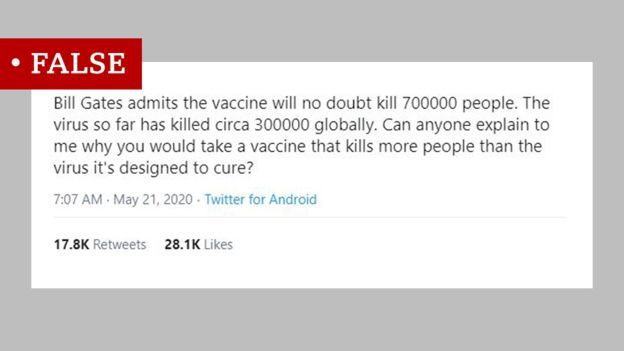 Bill Gates did not say this about a vaccine

The Microsoft billionaire has been the target of many different false rumours about vaccines.

A recent post on a UK-based Twitter account said: "Bill Gates admits the vaccine will no doubt kill 700,000 people" and links to a video featuring right-wing conspiracy theorist Alex Jones.

The claim in the tweet, which has had more than 45,000 retweets and likes, is false and misrepresents Gates' words.

In the video, Mr Gates is talking about the efficacy of vaccines in older people and cautions about the risk of side-effects.

He sets out a hypothetical situation about the potential harm of side-effects, saying:"If we have one in 10,000 side-effects, that's way more... 700,000 people who will suffer from that."

Conspiracy theories about Bill Gates have reached the Italian Parliament, where an independent MP called for Bill Gates to be referred to the International Criminal Court for crimes against humanity. 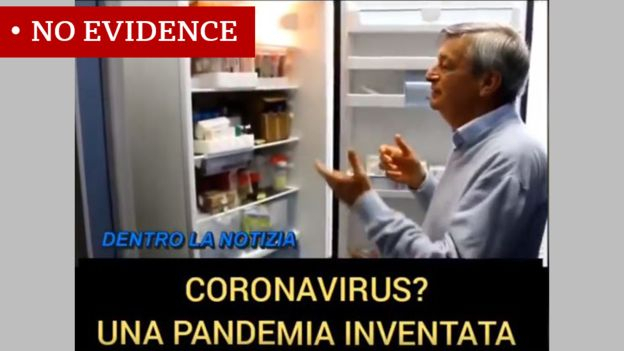 There is a strong anti-vaccination movement in Italy.

One popular Italian video, which has been viewed more than 700,000 times on Facebook, has a caption claiming that the pandemic has been "invented".

The narrator of the clip is Stefano Montanari, an Italian researcher with a degree in pharmacology, who claims the end goal is to get everyone vaccinated.

He argues that the epidemic "will continue to be totally made-up" until there is a vaccine that "will bring money and corruption into the already full pockets of some".

He concludes: "This is a sensational hoax, but a very successful one."

There is no evidence whatsoever to support his theory that the pandemic is a hoax. It is true that whichever pharmaceutical company develops a vaccine could potentially profit from the success, but the idea that this potential profit would be a motive to invent a pandemic is far-fetched. 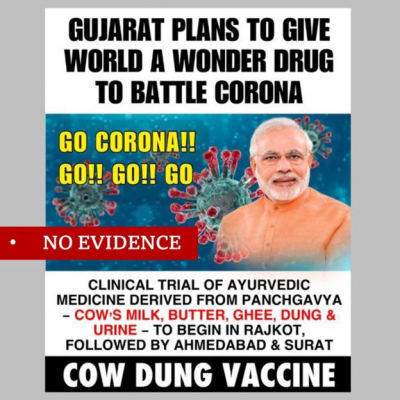 A Facebook meme announcing a "wonder drug to battle corona" and a "cow-dung vaccine" has been shared widely on Facebook in India.

Some of the posts, including one shared more than 1,000 times, link to a front-page story from the Ahmedabad Mirror, which reports that a trial of medicine derived from cow's milk, butter, ghee, dung and urine is under way.

The cow is considered sacred in Hinduism and some Hindu groups have claimed that drinking cow urine could boost immunity against the virus - a claim we've looked at before.

However, there is no scientific evidence to support this theory, and the trial described in the Ahmedabad Mirror does not mention testing cow dung as a vaccine or prophylactic treatment.

The article quotes a doctor as saying: "Cow urine is known to have medicinal components that can cure Covid-19." In fact there is no known cure for coronavirus.

We asked Dr Rajni Kant, a biologist and head of research at the Indian Council for Medical Research, about the use of cow urine or dung as a treatment.

The Rashtriya Kamdhenu Aayog, part of India's Ministry of Agriculture, confirmed there will be trials for a Covid treatment combining cow urine, dung, butter, ghee and milk - but not a vaccine.