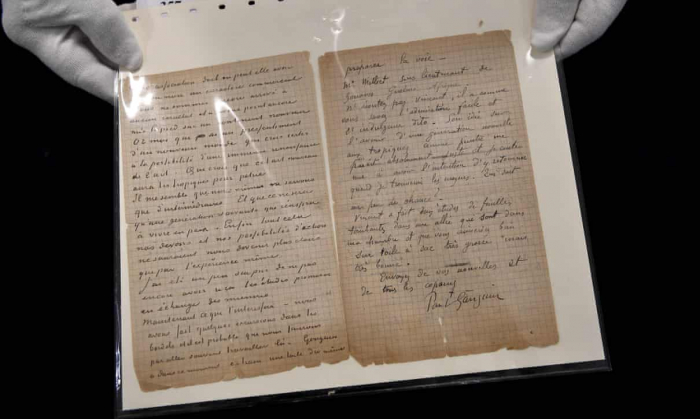 A letter written by two of the greatest artists of the 19th century, Vincent van Gogh and Paul Gauguin, about their visits to French brothels has been bought for the Van Gogh Museum in Amsterdam for €210,600 (£189,000).

The correspondence, previously held in private hands, has been described as “exceptional”. The two painters entwine descriptions of their experiences living together in Arles, Provence, with claims of certainty that their work is leading a “great renaissance of art”.

It was following a row with Gauguin, a few weeks after the writing of the letter, that Van Gogh cut off most of his left ear before walking to a nearby brothel in Arles to present it to Gabrielle Berlatier, a farmer’s daughter working as a maid. Gauguin abruptly called a halt to his plans to spend a year with the Dutch artist, lamenting that his friend had gone “raving mad”.

In the letter dated November 1-2 1888, the two men give an account to the artist Émile Bernard of their first week or so cohabiting in the town’s Yellow House, a cafe with rooms to rent that was immortalised by Van Gogh in an oil painting but demolished after being heavily damaged during the second world war. 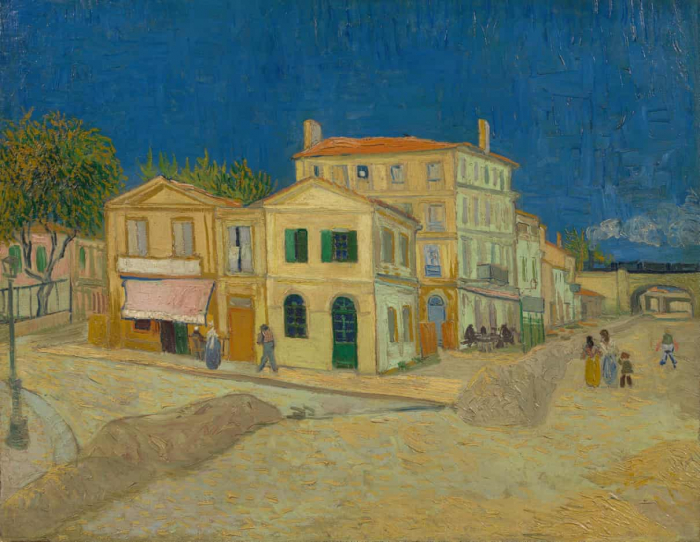 “Now something that will interest you – we’ve made some excursions in the brothels, and it’s likely that we’ll eventually go there often to work,” said Van Gogh in the only letter he ever co-wrote with a fellow artist. “At the moment Gauguin has a canvas in progress of the same night cafe that I also painted, but with figures seen in the brothels. It promises to become a beautiful thing.”

Van Gogh wrote that he had “made two studies of falling leaves in an avenue of poplars, and a third study of the whole of this avenue, entirely yellow”.

“I declare I don’t understand why I don’t do figure studies, while theoretically it’s sometimes so difficult for me to imagine the painting of the future as anything other than a new series of powerful portraitists, simple and comprehensible to the whole of the general public,” he wrote. “Anyway, perhaps I’ll soon get down to doing brothels.”

The four-page letter, written in French, was bought at the Drouot auction rooms in Paris on Tuesday by the Vincent Van Gogh Foundation. It will be part of an exhibition at the Van Gogh Museum this October entitled Your loving Vincent: Van Gogh’s Greatest Letters.

The artists’ collaboration in Arles was supposed to be a first step towards realising Van Gogh’s dream of establishing a utopian colony of painters, possibly he mused in the letter of “a commercial character”.

Gauguin was seen by Van Gogh, then 35, as the potential leader of such an association although he had just that summer painted some of his most enduring works including Still Life: Vase with Fifteen Sunflowers and Starry Night Over the Rhone.

Van Gogh wrote: “Gauguin interests me greatly as a man – greatly. For a long time it has seemed to me that in our filthy job as painters we have the greatest need of people with the hands and stomach of a labourer. More natural tastes – more amorous and benevolent temperaments – than the decadent and exhausted Parisian man-about-town.”

Gauguin is “an unspoiled creature with the instincts of a wild beast”, he added. “With Gauguin, blood and sex have the edge over ambition. But enough of that, you’ve seen him close at hand longer than I have, just wanted to tell you first impressions in a few words.”

In response, Gauguin gently mocked his friend. “Do not listen to Vincent, he is, as you know, easy to impress and ditto to be indulgent.” He wrote: “Vincent has done two studies of falling leaves in an avenue, which are in my room and which you would like very much.”

Relations between the men quickly soured. Shortly before Christmas, Van Gogh asked Gauguin whether he was planning to leave. When the French artist confirmed that was his intention, the two men had a furious argument. Later that day, Van Gogh took a razor to his ear. Eighteen months later, he was dead after shooting himself in a field near his doctor’s house in the northern French village of Auvers-sur-Oise.