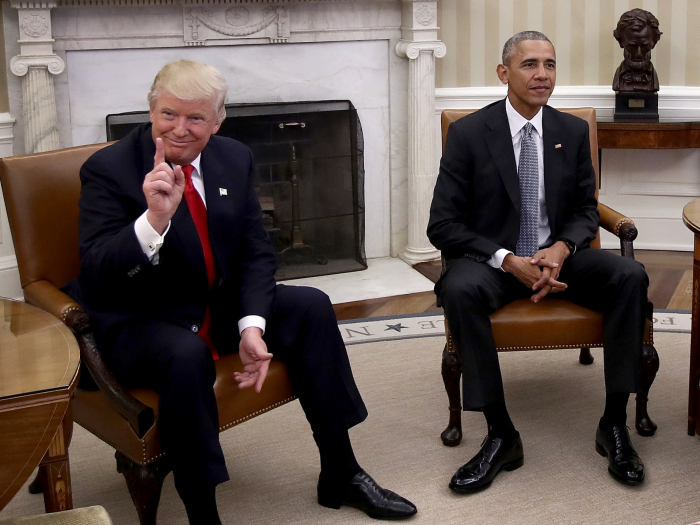 President Trump on Monday accused his predecessor, Barack Obama, of treason, without offering any evidence or details to back up his claim, the Washington Post reported.

Trump made the accusation in an interview with Christian Broadcasting Network. The president has frequently accused others of “treason,” but Monday marked the first time that he has leveled that claim against the man who preceded him in the Oval Office.

“On Obama and the spying situation, this idea that they were spying on your campaign — you’ve been asked before about what crime would have been potentially been committed,” Christian Broadcasting Network’s David Brody said.

“Treason,” Trump responded. He added: “It’s treason. Look, when I came out a long time ago, I said they’ve been spying on our campaign. ... It turns out I was right. Let’s see what happens to them now.”

Trump mentioned Attorney General William P. Barr and U.S. Attorney of Connecticut John Durham, who was tapped by Barr last year to investigate the origins of the 2016 election interference probe that has overshadowed Trump’s presidency.

“Let’s see what they come up with,” he said.

Despite Trump’s assertions that the FBI under Obama wiretapped the phones at Trump Tower during the 2016 campaign, Justice Department Inspector General Michael Horowitz said last year he found no evidence of that. But that has not stopped Trump from continuing to make the baseless claim.

In an exchange with reporters in the White House briefing room last month, Trump was pressed for more information on the scheme he has taken to calling “Obamagate.” What crime, a reporter asked him, was he accusing the former president of committing?

“You know what the crime is,” Trump responded, providing no details. “The crime is very obvious to everybody. All you have to do is read the newspapers -- except yours.”