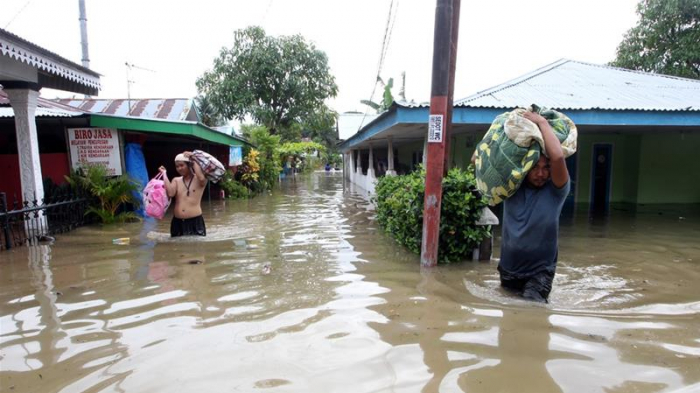 A search and rescue operation was underway to find missing people feared swept away by floods and mud after three rivers in North Luwu regency overflowed due to torrential rains, the island's disaster mitigation agency said.

"As of this afternoon, we have received reports from local residents who said their relatives have gone missing. There are dozens of them missing in total," North Luwu mitigation and rescue agency head Muslim Muchsin told AFP.

Hundreds of houses as well as government offices and public facilities were engulfed in three to five metres (10-16 feet) of mud.

"We can only see the roofs of the houses from a distance," Muchsin added.

As many as 2,000 residents were taking refuge at temporary shelters in North Luwu, the agency said, but the floods and mud were hampering efforts to distribute supplies.

"Now we are focusing on the efforts to clean out the debris that inundated the road so that we can open the access to the site to bring logistics," Muchsin said.

"From the latest data that I received in Radda subdistrict alone there are 56 people missing, but the number could be higher though as there are some villages that cannot be accessed at all," Indah said, adding her office was also covered by mud.

Earlier this year, record rains triggered flooding and landslides that killed nearly 70 people in and around Indonesia's capital Jakarta, which is on neighbouring Java island.

The Southeast Asian archipelago is regularly hit by floods during the rainy season.