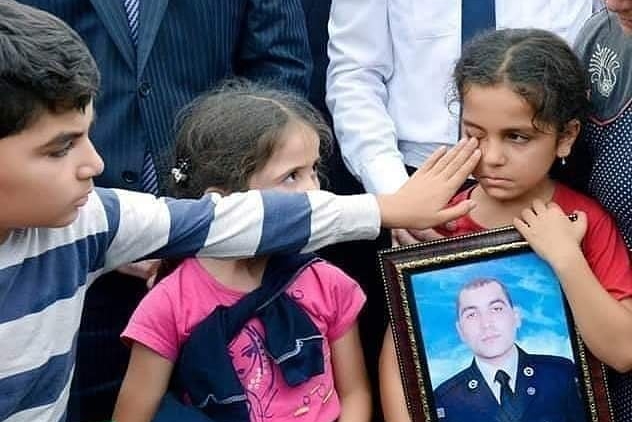 Children of Azerbaijani soldier Vugar Sadigov at his funeral. Sadigov was killed by Armenian troops while repelling Armenia's attack on July 12, 2020. Photo by Durdane Agayeva

It has been almost 30 years, but the pain and suffering I endured at the hands of my captives and torturers is something I will never forget; something that I live with every day of my life. So it is particularly painful for me to watch the news every day and to see that my country Azerbaijan is once again being brutally assaulted by the same invaders that imprisoned me, tortured me, and left me so damaged that I have required multiple spinal surgeries to recover and live today as a mother, a voice for survivors and an advocate for justice.

Thanks to the outpouring of support and solidarity, especially from Jewish communities around the world, I and my fellow countrymen and the over one million Azerbaijanis still living as refugees and internally displaced, have great hope that one day we will return home and somehow revive the world that was taken away from us —  the homes, memories and lives we once lived, lives that remain stolen to this day.

Despite the brutal history of invasions and offenses by neighboring Armenia against Azerbaijan in the Karabakh region, despite international condemnation and despite the fact that today the entire world is in crisis due to the COVID-19 pandemic, we are once again facing those same invading forces. On July 12, Armenia’s armed forces unleashed unprovoked fire at the northwestern border of Azerbaijan, killing four Azerbaijani soldiers  in what has been the worst assault since 2016. Today, they continue firing heavy shells indiscriminately into both military and civilian structures  which has resulted in the killing of a disabled 76 year old Azerbaijani, and on July 14, of a highly respected military general.  And this attack is happening along the Armenia-Azerbaijan international border, not in the Karabakh region of Azerbaijan, which has been occupied by Armenia since the early 1990s.

It is impossible to sit back in silence. It is especially disturbing to know that Armenia has become a recipient of over $2.5 billion worth US foreign aid, allocated by the US Congress at the behest of the Armenian lobby. Yet Armenia, with a devastated economy, an increasingly dwindling population and the worst levels of COVID-19 in the entire Caucasus region, devotes seemingly endless funds and effort to what is clearly their most pertinent objective: invading Azerbaijan and taking Azerbaijani lives. In a world that should be paying attention, Armenia is once again violating international law with impunity. They are literally using American taxpayer money to attack a major U.S. ally, unprovoked. This cannot stand.

We have shown, through the solidarity of communities across the world and of every faith, that what happened in Azerbaijan 30 years ago will not be forgotten and that we can still hope for justice someday soon. And so I hope today our supporters and friends across the world, especially in the U.S., where we have been so profoundly embraced and supported, will stand up again now and condemn this invasion and make it clear that unprovoked warfare has absolutely no place in the world we live in today, especially during the current global health crisis. It is tragic to note that the notorious Armenian lobby, known as ANCA — a political arm of Armenian Dashnaks that have a history of supporting Nazi Germany and the Holocaust during the WWII— has successfully hoodwinked some U.S. elected leaders to attack Azerbaijan —  the victim of aggression, occupation and ethnic cleansing. Its an art of revisionism that they often employ and have used to avoid responsibility for what the European Court of Human Rights has designated “Crimes Against Humanity,” and to justify raising a statue of a Nazi collaborator in the center of Armenia’s capital city in recent years.

All of this is inexcusable, and with the support and outcry of our allies, politicians must stop participating in the ANCA-orchestrated revision of history and fact, especially as it directly relates to innocent blood being shed today, against every principle of international law. And we are counting on uncompromised U.S. leadership to stand up to ANCA and their manipulations, and more importantly, to condemn and stop sending precious U.S. taxpayer money to a country that has devoted all that it has to destroying another; my homeland Azerbaijan, considered across the world to be an exemplary model for Muslim-Jewish harmony.

These have been trying months with a global pandemic, major social and economic crises affecting nations across the world, and certainly the worst and most disastrous time for one nation to flagrantly invade another  for no reason beyond their own self-entitled violence. As a mother and a survivor, I say to these perpetrators: how dare you? And to the enablers of this violence, the lobby and those elected leaders it pays to revise history before a trusting public, I ask: how dare you? And to my friends, my brothers and sisters in the Jewish community and beyond — to all those committed to a better and more peaceful world — I look to you for solidarity, for an outcry and to help put an end to the unabashed violence committed against my nation — an unwavering ally to the United States and the State of Israel, by condemning the actions of Armenia and its lobby in the U.S.

Durdane Aghayeva is a Muslim woman from Azerbaijan with a special connection to Jewish communities across the world, particularly here in Los Angeles. Durdane is a survivor of torture and a passionate advocate for peace. She works tirelessly for the empowerment of all survivors, to help others to find strength and healing through the unifying process of sharing.

Read the original article on jewishjournal.com.