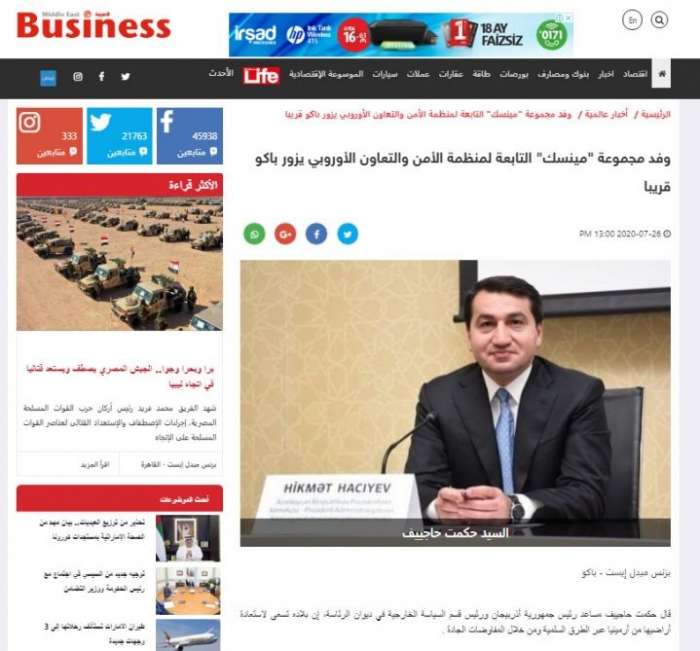 Articles regarding military provocation committed by Armenian army in the direction of Azerbaijan’s Tovuz district of the Azerbaijani-Armenian border, have appeared in Arabian media outlets, AzVision.az reports.

The articles were published based on an interview with Assistant to Azerbaijan’s President - Head of the Department of Foreign Policy Affairs of the Presidential Administration Hikmat Hajiyev on the issue of the provocation.

The materials published in the Arabian and English-language news agencies, newspapers and internet resources of the UAE, Dubai Global News, Emirates Tourism, as well as in the publications of the Union of News Agencies (UNA) of the Organization of Islamic Cooperation (OIC), the Egypt and Lebanon - Al-Ahd Al-Duwali, Al Gimmah News, Al-Diplomasi, Egypt News, Al-Habbar, Wasat Al-Balad, Kalemat Al Arab, Vol News, highlights the need to increase the efforts of the OSCE Minsk Group co-chairs and the entire world community towards the settlement of the Armenian-Azerbaijani conflict.

The articles noted that during the meetings of the Security Council and the Cabinet of Ministers of Azerbaijan, President of Azerbaijan Ilham Aliyev gave a full assessment for the latest provocations of Armenia in connection with the current developments.

Hajiyev in his interviews accused Armenia of trying to involve in the conflict third states and military-political organizations, of which Armenia is a member.