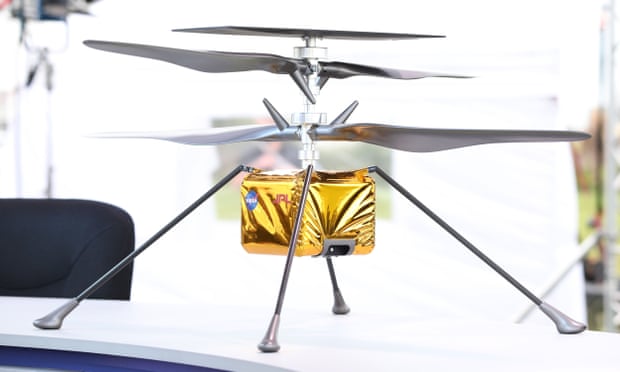 Nasa’s most sophisticated rover yet is due to blast off for Mars on a mission to answer one of the most profound questions: did life ever emerge on another planet?

Mission controllers have set their sights on the 28-mile-wide (45km) Jezero crater north of the planet’s equator. The landing site is one of the most promising spots for any microbial Martians to have been preserved in rock formed when the crater held a lake nine times larger than Loch Ness.

The $2.7bn (£2.1bn) rover carries a suite of instruments to analyse rocks for “biosignatures” – the chemical hallmarks of life – but will cache other samples on the surface for collection and return to Earth onboard a future mission.

Bad weather and technical glitches aside, the Perseverance mission will embark on its half-a-billion kilometre voyage at 12.50pm BST on Thursday when the engines of the Atlas V rocket it is strapped to light up at Cape Canaveral, Florida.

With coronavirus raging in the southern state, few scientists and engineers will be in Florida to witness the launch and will instead follow events online.

“It’s an early launch for us,” said Ken Williford, the deputy project scientist at Nasa’s jet propulsion laboratory in Pasadena, California. “I’ll need to be up around 3am, though I don’t know if I’ll be able to sleep.

“Our plan was to have thousands of people there. Our science team alone is 400 people and everybody was going to be invited. It’s very different. We’ll be celebrating remotely.”

Even without the pandemic to contend with, the mission has been a challenge. Beyond developing powerful new instruments and an upgraded autopilot system, engineers built a helicopter for the rover to deploy, the first to take to the air on another planet.

Named Ingenuity, the 1.8kg helicopter will be a “pathfinder” for future rotorcraft that scout ahead of robotic rovers, and perhaps even astronauts, and explore terrain beyond the reach of either, said MiMi Aung, the Ingenuity project manager. Should Perseverance touch down safely, Ingenuity will attempt up to five flights over 30 days, clawing into the thin Martian air with four 1.2-metre-long carbon-fibre blades spinning at 2,400rpm.

“The nervousness and nail-biting will come on the surface,” Aung told the Guardian. “Surviving the first night for us is going to be huge.”

But first it has to get there. Trips to Mars are daunting feats and the recent successes of Nasa’s Mars Insight and Curiosity missions do nothing to change that. The low Martian gravity and the rarefied atmosphere make entry, descent and landing so fraught that flight engineers are prone to use the word “terror”.

After seven months of interplanetary travel, in February 2021 the spacecraft will punch into the Martian sky at such a speed that its heat shield will sear at 2,370C (4,298F). With thrusters for control, the probe will streak towards its landing site, pop a parachute and then cut it loose, descending the final 10km to the surface on eight retrorockets.

All being well, Perseverance will land in the Jezero crater on the western edge of Isidis Planitia, a giant impact basin north of the Martian equator. The site was picked from more than 60 candidates because of its promise for preserving signs of life. The crater was once home to an ancient lake and river delta that may have collected and buried Martian microbes and locked them in rocks made from compacted clay or mud.

Mounted on the end of its robotic arm are two instruments that Perseverance will use to search for signs of past life, or promising rocks to return to Earth. The Pixl (planetary instrument for X-ray lithochemistry) can blast rocks with a small but powerful beam to reveal their elemental makeup. Another tool, named Sherloc, will scan rocks for organic molecules and minerals. Hints of life may lie not only in organics, but the textures and patterns of compounds scientists see in the rocks.

“It is very likely that any signs of life we do find will be very ambiguous, very difficult to interpret, and difficult or impossible to achieve true scientific consensus on,” Williford said. “We have very good capabilities for finding potential signs of life, but we’ll need to get those samples back and have many different people study them with many different techniques for years to achieve anything like scientific consensus.”

Mark Sephton, an astrobiologist at Imperial College London, is part of the team that will decide which half a kilo of rocks to bring back to Earth, an unprecedented feat Nasa may achieve with the European Space Agency in 2031.

“We could be about to step over quite a profound threshold,” he said. “We talk about the possibility of finding life on Mars, but people forget that if that happens and it’s conclusive, that’s a step change. That’s a line you cross and you never go back. It tells us that everywhere in the universe, where you’ve got the right conditions, the right raw materials, and a bit of time, that life should spring up.

“I’m excited, but nervous that anything might happen which stops the opportunity of a lifetime. It’s such a privilege to be involved. It’s historical. I don’t want anything to go wrong.”