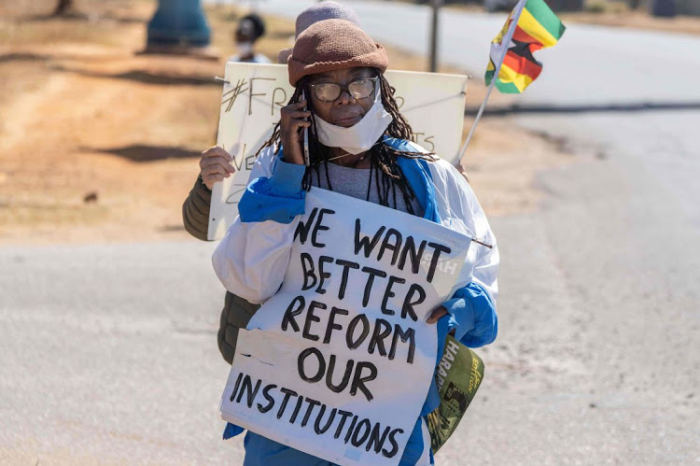 A campaign drawing attention to human rights abuses in Zimbabwe is attracting international celebrities and politicians as pressure mounts on President Emmerson Mnanagwa’s government to act.

The #ZimbabweanLivesMatter campaign, which originated in South Africa this week, is currently No 1 on the list of trending topics on Twitter and prominent on other social media platforms.

US celebrities including the musicians Ice Cube, Lecrae and Tinashe have joined tens of thousands voicing their concern over the deteriorating human rights situation in the country.

The South African hip-hop star AKA, real name Kiernan Forbes, became one of the pioneers of the social media campaign after he tweeted a picture of himself draped in the Zimbabwean flag.

“Fadzayi, Tsitsi, Julie, Terrence, Loveridge, and all the others in Zimbabwe’s protest may God give you strength and courage in your pursuit of freedom. #ZimbabweanLivesMatter,” Sirleaf wrote on Twitter.

Zimbabwean activists have been lobbying the former US president Barack Obama, the current president, Donald Trump, and members of the US senate to speak on the issue.

The campaign comes after arrests, abductions and torture of high-profile political activists and the incarceration of journalist Hopewell Chin’ono and the Booker prize long-listed author Tsitsi Dangarembga.

Chin’ono and the opposition leader Jacob Ngarivhume have spent two weeks in remand prison. Their bail ruling has been set for Thursday.

The Zimbabwean Lives Matter hashtag was fashioned after the Black Lives Matter global protests staged since the killing of George Floyd by a US police officer in May.

With several political activists in hiding and on the police wanted list, Zimbabwe’s human rights situation has once again become a subject of global debate.

The South African politician Julius Malema called upon Pretoria to shut down the Zimbabwean embassy as diplomatic pressure mounted on Mnangagwa’s regime.

There are also calls for the African Union to suspend Zimbabwe.

The trending hashtag has emboldened Zimbabweans who feared going out to street demonstrations in light of the security clampdowns on peaceful protests.

Hundreds of police and soldiers were deployed on the streets of cities across Zimbabwe ahead of planned anti-corruption demonstrations last week.

In reaction to the growing social media revolution, Mnangagwa on Tuesday addressed the nation.

“The bad apples that have attempted to divide our people and to weaken our systems will be flushed out,” Mnangagwa warned.

Widely ridiculed online, the comment is is largely viewed as a warning of another crackdown.

UN human right experts have condemned the growing torture and enforced disappearances. Zimbabwe’s human rights situation has worsened since six people were shot in Harare in the aftermath of the July 2018 polls and up to 10 people were killed during a crackdown on dissent in January 2019.

Opponents claim Mnangagwa is exploiting a Covid-19 lockdown to stifle opposition, after he imposed an overnight curfew and restricted free movement.