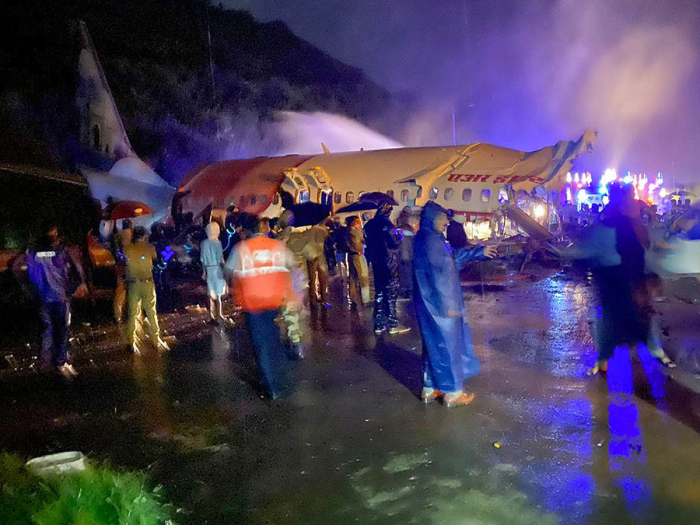 Kerala Minister MK Muneer has told India Today TV that the death toll in the Air India crash has risen to 19.

Nineteen, including former Indian Air Force (IAF) test pilot Captain DV Sathe and his co-pilot, have died while the injured are being treated at the MIMS hospital and Baby Memorial hospital in Calicut.

At least 170 of those onboard the flight, including passengers and cabin crew, have been rescued, DGCA Director-General (DG) Arun Kumar said. Kerala CM Pinarayi Vijayan confirmed that the evacuation process is complete. CISF (Central Industrial Security Force) personnel who were the first responders along with NDRF (National Disaster Relief Force) teams managed to rescue a woman and a child alive during the final search of the plane's wreckage.

21:42
An Air India Express plane with 191 people on board has crashed at an airport in the southern state of Kerala, killing at least 16 people, officials say.

The aircraft, en route from Dubai, skidded off the runway and broke in two at Calicut airport upon landing, India's aviation authority said.

Rescue efforts are under way, with emergency services at the scene.

Prime Minister Narendra Modi said he was "pained by the plane accident".

MK Raghavan, a lawmaker from Calicut, told the BBC at least 16 people died in the crash.

Most people on board the Boeing 737 jet have been evacuated, with at least 35 of them taken to hospital with injuries, authorities said.

The airline said there were 184 passengers - including 10 children and seven crew members, of which two were pilots - on board flight IX-1344 when it crashed at Calicut, also known as Kozhikode.

The flight was being operated by the government to repatriate Indians stuck overseas during the coronavirus crisis.

At least two people were feared dead and 35 injured when an Air India Express passenger plane overshot the runway and broke into two after landing in the southern city of Calicut in Kerala in heavy rain on Friday, police said.

The Boeing-737 plane flying from Dubai had 191 passengers and crew on board, the civil aviation ministry said in a statement. There were 10 infants on board.

“We believe there are two people dead, and 35 injured, we are still in the middle of the rescue effort,” area police superintendent Abdul Karim said.

The plane’s fuselage split into two as it fell into a valley 30 feet below, authorities said.

“As per the initial reports rescue operations are on and passengers are being taken to hospital for medical care,” the civil aviation ministry said in the statement. There was no fire on board, it said.

It was a repatriation flight operated by the government to bring Indians home during international travel restrictions due to the spread of the novel coronavirus.