Will the resignation of Lebanon’s govt change anything? 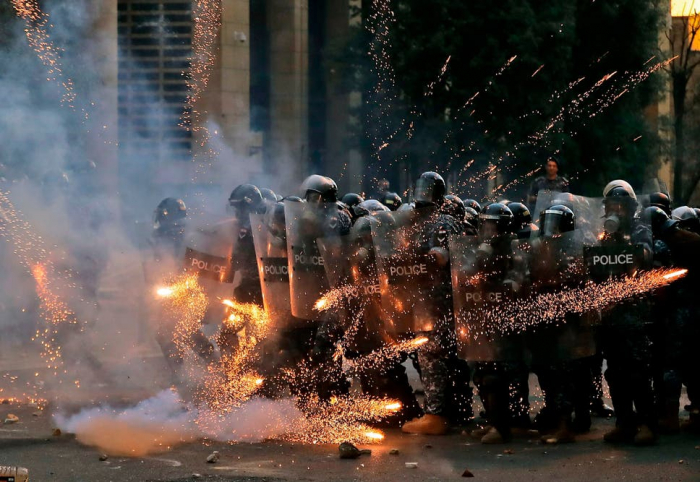 Protesters were being tear-gassed by security forces around the parliament when Prime Minister Hassan Diab went live on air to declare the cabinet’s resignation, the Independent reported.

He took to the podium and blamed the crisis on the political forces in power before he took office. He claimed he tried to remedy Lebanon’s woes but “discovered corruption is greater than the state”.

The rallies did die down in the wake of his announcement, but there were no mass celebrations in Beirut. Instead, people warily said it was a “good first step”.

“We haven’t trusted this government since day one,” said Cherine, a protester who needed hospital treatment after narrowly escaping death during Tuesday’s blast.

“But we fear we will see a repeat of all the other times. We need the whole system including the president to step down.”

Just days before, furious protesters in Lebanon’s Martyrs Square strung effigies of all the country’s political figures on a rack of nooses.

Crowds stormed and briefly took over the ministry buildings, calling for ministers to, metaphorically hang.

Anger simmered in the streets as it emerged the president, the prime minister, the security forces and port officials had all known about the dangerously stored stockpile of explosives that is thought to have caused the blast, killing over 200 people and injuring 6,000 more.

Fury mounted with the lack of official response in the immediate aftermath: citizens armed with brooms and shovels were left to clear up the debris and house the 300,000 homeless.

Still the cabinet clung on. Until Monday, amid the threat of further unrest on the horizon and mass resignations.

Practically for now the government remains in place in a caretaker role until, at the request of President Michel Aoun, the parliamentary blocs agree on a new prime minister.

This happened in October when former premier Saad Hariri stepped down during nationwide protests against a worsening economic crisis. The process is fraught and can take months.

The names of possible replacements being bandied about the hallways of power are familiar. They include Mr Hariri himself as well as a former candidate for the premiership Nawaf Salam, a diplomat and judge with close ties to the US.

Neither represent a radical shift that protesters have been calling for. Even the outgoing ministers admitted this was the case.

“I don’t think there will be a real long-term solution without a full change of the political system or the constitution,” said Raoul Nehme, who until Monday evening was the country’s economy minister.

Echoing Mr Diab, he too blamed “political forces… for not allowing us to do what we had to do”, adding that the cabinet he was part of couldn’t undo 30 years of mismanagement and corruption in six months.

“We were hoping to be able to work as technocrats and we were not able to,” he said.

That said there is a huge amount of pressure for reform not only on the streets of Lebanon but the international community, according to Maha Yahya, director of the Carnegie Middle East Centre.

A donor conference hosted by French president Emmanuel Macron on Sunday raised pledges worth nearly €253m (£217m) for immediate humanitarian relief. That would only be delivered on the condition of transparency – that the money does not just line the pockets of the powerful.

That said, there needs to be a stable government to be able to rebuild the country. There is a recognition from all sides that the current situation is not tenable.

“This is no longer about a political collapse but a massive humanitarian crisis which is coming on the heels of a total economic meltdown,” Ms Yahya said.

“There is a desperate need for aid, and all eyes are on Lebanon.”