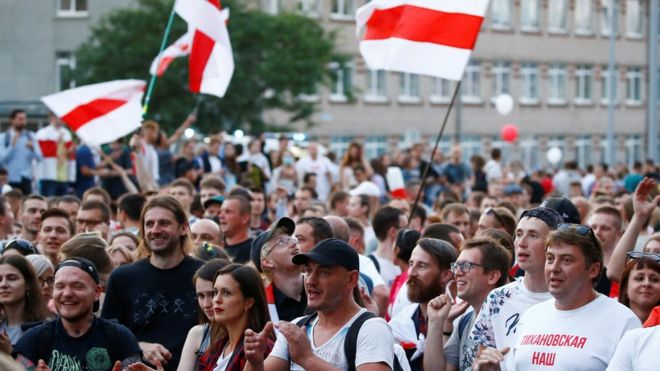 Thousands of people have gathered outside the state television station in Belarus demanding full coverage of protests against the disputed presidential election, BBC reported.

Opposition supporters outside the building in Minsk held banners with signs saying "show people the truth".

The state broadcaster initially chose not to cover the protests.

The election result has been condemned with widespread allegations of vote-rigging.

The Central Election Commission says Mr Lukashenko, who has been in power since 1994, won 80.1% of the vote and the main opposition candidate Svetlana Tikhanovskaya 10.12%.

But Ms Tikhanovskaya insists that where votes were properly counted, she won support ranging from 60% to 70%.

On election day, Belarusian state channels aired the voices of Lukashenko supporters and did not cover the demonstrations. State TV later showed footage of violence to blame protesters and warn people not to participate.

Several journalists have resigned over the coverage.

On Friday, European Union foreign ministers agreed to prepare new sanctions against Belarusian officials responsible for "falsification". The US has also condemned the election as "not free and fair".

And on Saturday, three Baltic states called for the vote to be re-run.