Belgium: Calls for new inquiry into death in police custody 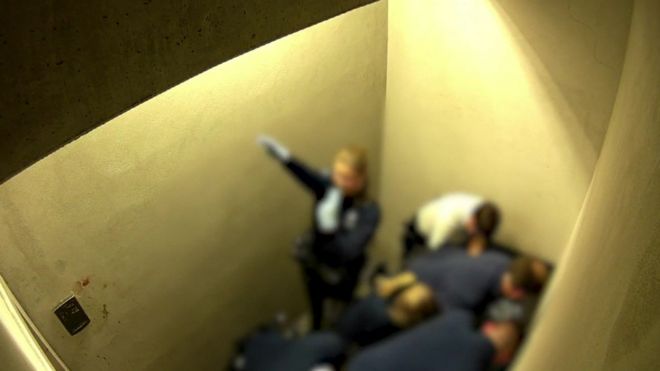 The wife of a Slovak man who died in Belgian police custody has called for a fresh inquiry after shocking new images of his detention have emerged.

Jozef Chovanec was arrested at Charleroi airport in 2018 after causing a disturbance on his flight.

While being detained, he began banging his head on the wall of his cell to the point of bleeding. A group of officers are later seen pinning him down.

Chovanec was taken to hospital, but fell into a coma and died the next day.

The images from the cell show several officers laughing during the incident, while another made a Nazi salute. Another was filmed sitting on Chovanec's rib cage for 18 minutes.

His death has drawn parallels with the case of George Floyd, who died in May after a police officer knelt on his neck during his arrest in the US.

"I want to know what happened and why [the police] behaved that way," said his wife, Henrieta, told Het Laatse Nieuws, the local newspaper which obtained the footage.

Before his death, Chovanec owned a company that recruited Slovakian construction workers for projects in Belgium, and he frequently commuted between the two countries for his business.

His family said they do not know the reason for his erratic behaviour during police custody, and an autopsy revealed he had not been under the influence of drugs or alcohol.

"Something seemed to be going on with my husband, he wasn't feeling well, but the police ignored my husband all night," said Mrs Chovancova. "When they saw the blood, they should have given him first aid. Instead, they sat on him with so many people. He couldn't breathe properly."

Two years after his death, a police investigation is still ongoing, and Mrs Chovancova has called for a new judge to be appointed.

A spokesperson for the Charleroi public prosecutor's office said all officers involved in the incident had been interviewed, but added that "due to the crisis surrounding Covid-19, there has been a delay".

In the meantime, a police spokesperson told local outlet Sudpresse that the officer pictured giving a Nazi salute would be dismissed from 20 August.