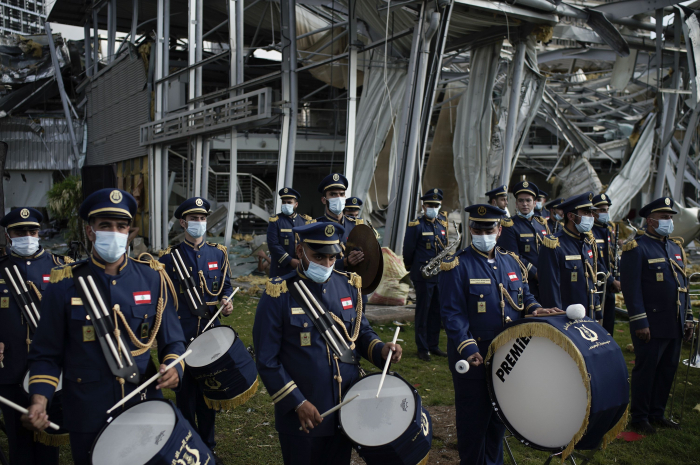 Lebanon on Friday began a two-week partial lockdown and nighttime curfew after coronavirus cases increased sharply following an explosion in Beirut that killed and injured thousands of people.

Confirmed cases of the virus have increased from 5,417 a day after the massive blast on Aug. 4 to nearly 11,000 on Friday, leading officials to announce the lockdown.

The pandemic has killed 113 people in the tiny country, which was successful in limiting the spread of the virus during the early months.

Many businesses were closed Friday morning in Beirut even though some sectors, including banks, groceries, book shops and pharmacies were allowed to open. Restaurants, night clubs, beaches and clothes shops are among the businesses ordered to close by the Ministry of Interior.

Virus cases had already been on the rise since the beginning of July, when an earlier lockdown was lifted and Lebanon’s only international airport was reopened. At the end of June, Lebanon registered 1,778 cases. That number has since multiplied more than five times in seven weeks.

But the numbers shot up dramatically following the Aug. 4, explosion of nearly 3,000 tons of ammonium nitrate stored at Beirut's port. More than 180 people were killed, more than 6,000 injured and a quarter of a million people were left with homes unfit to live in. The blast overwhelmed the city’s hospitals and also badly damaged two that had a key role in handling virus cases.

After the blast, medical officials have warned of increased risk of catching the virus because of crowding at hospitals and funerals, or as people searched through the rubble. Protests and demonstrations also broke out after the blast as Lebanese vented their anger at authorities.

The virus causes mild to moderate symptoms in most people, who recover within a few weeks. But it is highly contagious and can cause severe illness or death, particularly in older patients or those with underlying health problems.

Lebanon’s health sector has been challenged by the pandemic that hit amid an unprecedented economic and financial crisis.

In the United Arab Emirates, a health official warned that nighttime curfews and lockdowns could resume in parts of the country as coronavirus case numbers spike.

Dr. Saif al-Dhaheri of the UAE’s National Emergency Crisis and Disasters Management Authority made the comments late Thursday in an interview aired on a state-owned television channel.

Asked if those measures could be taken, al-Dhaheri said: “Yes. If we found that the number of cases is increasing in a specific area, we could.”

Returning to lockdowns could hurt Dubai, the skyscraper-studded city that’s reopened for tourists just a few weeks ago. It also could affect the UAE’s efforts to host the Indian Premier League beginning next month.

On Wednesday and Thursday, the UAE discovered over 400 confirmed cases of the virus, its highest numbers in about a month amid an aggressive testing campaign. Officials have blamed the rise in infections on the public not taking wearing masks and social distancing seriously.