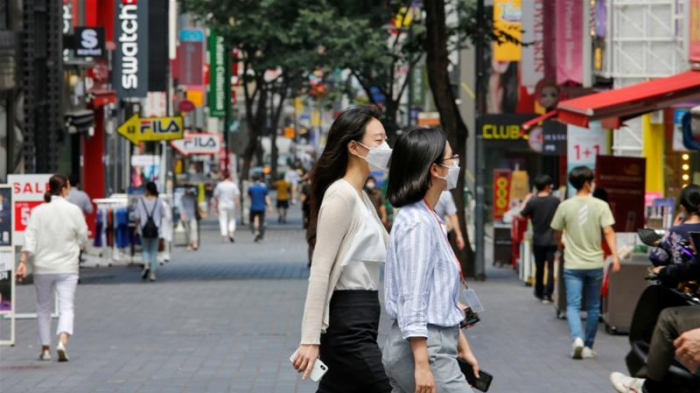 South Korea reported its highest daily number of coronavirus cases since early March on Sunday as authorities warned the country was "on the brink of a nationwide pandemic" and tightened social distancing rules, AzVision.az reports citing AFP.

The majority of the 397 new infections were in the greater Seoul region -- home to half the country's 51 million people, the Korea Centers for Disease Control and Prevention said.

Authorities warned of tougher social distancing rules, which may include closing schools and businesses, if the number of new cases continues to grow at a fast pace after South Korea had largely brought its earlier outbreak under control.

"The situation is very grave and serious as we are on the brink of a nationwide pandemic," KCDC chief Jung Eun-kyeong told reporters.

"Please stay home if possible," Jung said, adding the number of infections has not peaked yet.

Virus curbs were tightened in the Seoul region last week and were further expanded to the rest of the country on Sunday.

The measures include restrictions on large gatherings such as religious services and the closing of nightclubs, karaoke bars and cyber cafes.

All beaches have also been closed.

The Seoul Metropolitan Government said Sunday that face masks would be mandatory for indoor and crowded outdoor areas in the capital from midnight.

South Korea has reported a total of 17,399 coronavirus infections with 309 deaths.

The country endured one of the worst early outbreaks outside mainland China but brought it broadly under control with extensive tracing and testing while never imposing the kind of lockdowns ordered in much of Europe and other parts of the world.

South Korea has been seen as a model on how to combat the pandemic with the public largely following safety health measures such as face masks.

It even started allowing limited numbers of spectators at sports events in July -- which was reversed for the greater Seoul area last week and nationwide from Sunday.