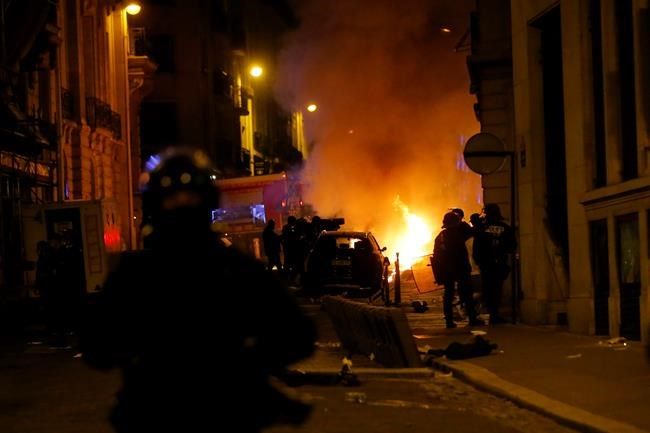 Dozens of disgruntled Paris Saint-Germain fans clashed with French riot police on the Champs-Élysées on Sunday after their team lost to Bayern Munich in the Champions League final in Lisbon.

Hundreds of other supporters trudged away from the famed avenue in Paris following the 1-0 defeat, which ended PSG's bid to join Marseille as the only French club to win Europe's elite soccer competition.

Close to the Champs-Élysées, a dozen riot police in full gear burst into a bar to aggressively remove people, because some were not wearing masks, or were failing to keep social distancing amid coronavirus concerns.

Over in western Paris, there were also incidents when riot police used tear gas to disperse fans gathered outside the club's stadium.

PSG beamed the match on two giant screens at its Parc des Princes stadium, with 5,000 fans allowed inside in keeping with the maximum allowed for soccer games in France.

But only minutes before kickoff, at 9 p.m. local time, hundreds of fans were still queuing and frustrations soon escalated because they could not see the biggest game in their club's history.

PSG was trying to end decades of gloating from bitter rival Marseille — still the only French club to have won the competition in 1993.

Despite huge backing from Qatari investors QSI, including more than $500 million spent on Neymar, Kylian Mbappé and Angel Di Maria, PSG has never won the competition.

The defeat was met with huge celebrations in Marseille, where fans cheered and let off flares and fireworks.

Extra security measures had been put in place for Sunday evening with 3,000 police deployed on the Champs-Élysées, as well as to prevent large numbers gathering outside Parc des Princes.

Around 2,000 masks were made available to fans arriving on the Champs-Élysées without them. Bars and cafés were monitored to ensure people respected virus prevention measures, with people risking a fine for not wearing a mask.

In a bid to keep the numbers down, 17 subway and commuter train stations were shut at night and three ring road entry points into Paris closed off. The avenue was reserved for only pedestrians from the start of the match with no vehicles allowed.

The measures were put in place by Interior Minister Gérald Darmanin following chaotic scenes on Tuesday, when thousands of fans poured onto the Champs-Élysées to celebrate PSG reaching the final — many without face masks and with no social distancing. Police arrested 36 people Tuesday after groups of fans at the foot of the Arc de Triomphe broke off into scattered violence and shop windows were smashed.

The Interior Ministry encouraged people to watch the game at home rather than going out.

“Make the most of the moment with peace of mind and watch the match from your couch," the ministry said. "Protect yourself, protect others. Everyone behind PSG.”

Accompanying the message was a photo of feet propped up on a table, in front of a screen, along with the words: “To be sure to have a good seat, watch the match at home!”