Thousands of lightning strikes lead to record wildfires in California 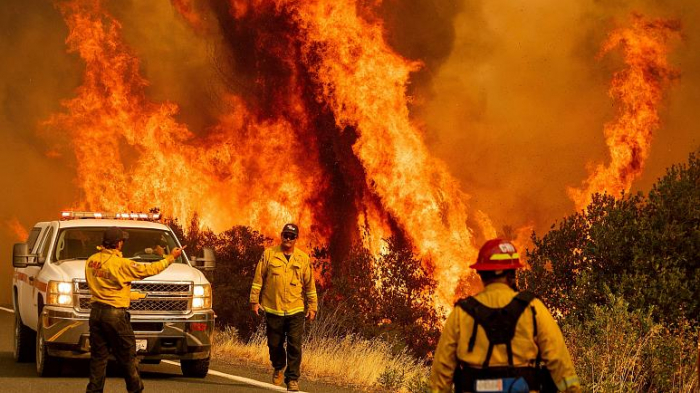 Some of the biggest wildfires California has seen in living memory are continuing to tear through the north of the state, as firefighters battle the flames in a bid to save homes and lives.

More than 24 large fires were burning over the weekend, sparked by an unprecedented volley of some 12,000 lightning strikes over the course of several days.

There are 14,0000 firefighters, 2,400 engines and 95 aircraft battling the fires, which have so far claimed at least seven victims, including the body of one man found on Sunday in a remote area that was under evacuation orders.

The worst could still be yet to come. The National Weather Service issued a “red flag” warning up to Monday afternoon for the Santa Cruz Mountains area south of San Francisco. The drought-stricken area may see extreme fire conditions including high temperatures, low humidity, lightning and wind gusts up to 65 mph that “may result in dangerous and unpredictable fire behavior.”

Mark Brunton, a battalion chief for the California Department of Forestry and Fire Protection (Cal Fire), said “There’s a lot of potential for things to really go crazy out there.”

Two of the fires currently burning - one north of San Francisco and one southeast of the city - are now two of the largest three fires in state history, both burning an area of more than 500 square miles.

“You could overlay half of one of these fires and it covers the entire city of San Francisco,” said Cal Fire spokesman Brice Bennett.

The Governor of California spoke at the Democratic National Convention via video to point to the fires as evidence of climate change.

Speaking from a forest near Watsonville, after visiting an evacuation centre, Gavin Newsom said: “If you are in denial about climate change, come to California.”

A timelapse video from OroraTech shows the growth of the wildfires over the course of six days, which it says now affects around 340,000 acres, or 530 square miles.