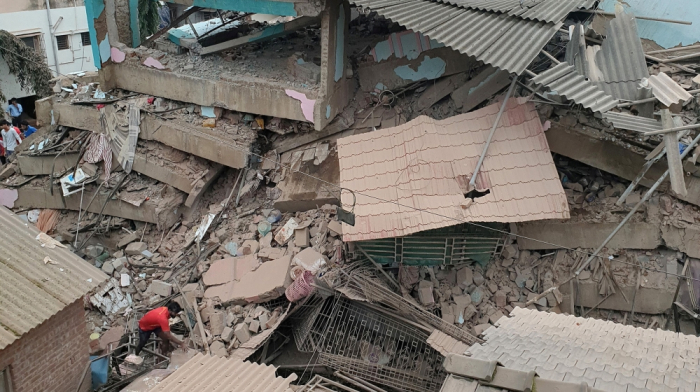 Two people have died and at least 18 others are still feared trapped in western India after a five-storey apartment building collapsed on Monday.

The building in the town of Mahad, about 170km (105 miles) from Mumbai, contained 47 flats, police said.

Nearly 60 people have been rescued from the debris so far, the district administration told ANI news agency.

Building collapses are not uncommon in India, particularly during the heavy rains of the monsoon season.

Police said that the building collapsed at 19:00 local time on Monday.

Reports said the building was about 10 years old.

People living in the building said they rushed out when it started shaking.

Eyewitnesses told the media that they were alarmed by the loud noise as the building collapsed. They ran towards it as smoke began to rise from the debris.

They said they could hear people trapped under the rubble screaming for help. So they alerted the fire brigade and began rescue efforts immediately.

The death toll in India from this year's monsoon rains is more than 800, according to the AFP news agency.