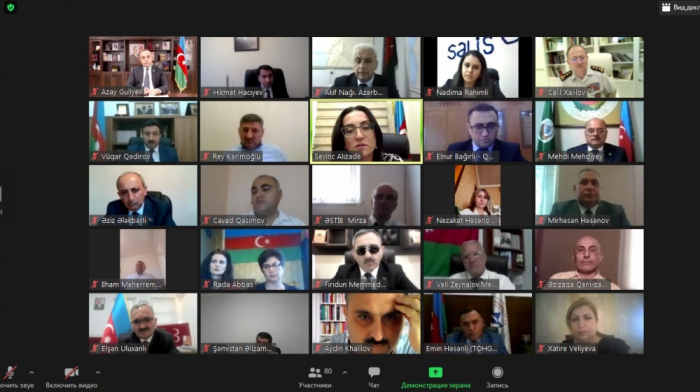 Assistant to Azerbaijan’s President Hikmet Hajiyev on Thursday held a meeting via videoconferencing with heads of 74 non-governmental organizations dealing with the affairs of martyr families, Karabakh veterans, war veterans, disabled, refugees and internally displaced persons, the Secretariat of the Council of State Support to NGOs under the President of Azerbaijan told AzVision.az.

He noted that the Council regularly provides funding to the relevant NGOs and always supports their initiatives in this area.

Speaking at the meeting, Hajiyev first commemorated the memory of Azerbaijani martyrs who sacrificed their lives for the protection of the country’s territorial integrity. Hajiyev stressed that the problems of martyr families, Karabakh veterans, war veterans, disabled, refugees and IDPs are in the spotlight of President Ilham Aliyev and First Vice-President Mehriban Aliyeva.

He pointed out that great work has been done to address the problems of people from these categories.

“As you know, the first decree President Ilham Aliyev signed after being reelected in 2018 was connected with the social protection of martyr families. This was a manifestation of a high assessment of the martyrs. Upon the decree, about 10,000 martyr families received lump sum payments in the amount of 11,000 manats. Moreover, 8,018 martyr families and war invalids were provided with apartments, as well as they were given 6,900 cars.”

He went on to say that this year 1,500 martyr families and war invalids were provided with apartments.

As for IDPs’ housing problems, Hajiyev said that the state will provide apartments to over 7,000 IDP families in 2020.

Hajiyev also noted that Azerbaijani First Vice-President, President of the Heydar Aliyev Foundation Mehriban Aliyeva has done great work to improve the living standards of people from the abovementioned categories.

Later, heads of NGOs made speeches at the meeting and expressed gratitude to President Ilham Aliyev for his attention and care to them. Putting forward various proposals, they highly appreciated the NGO-government dialogue being conducted with the participation of Hikmet Hajiyev.