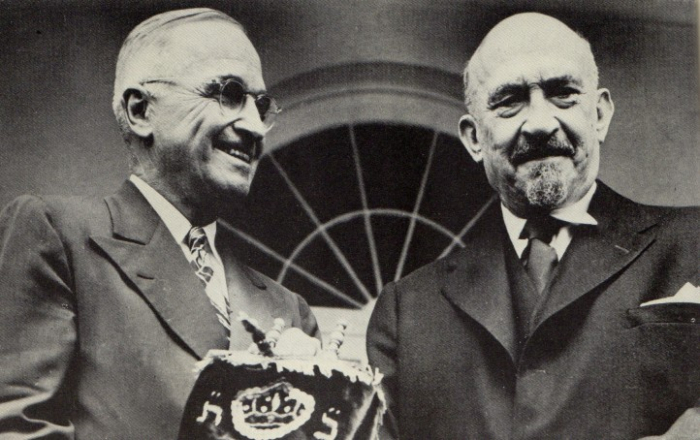 It may seem like ancient history, but conspiracy theories spun by US conservatives during the World War II era have a direct bearing on the Republican Party today. While many Americans find today's GOP to be unrecognizable, the isolationists, cranks, and bigots have been waiting in the wings for 80 years.

In the summer of 1945, the Allied policy of demanding unconditional surrender in World War II became the subject of intense debate in the United States. In a way, it has remained so ever since, tracking with Americans’ changing attitudes about the Cold War and post-Cold War interventions in the Middle East. In fact, the Republican Party’s own shifting positions on the issue of unconditional surrender during WWII offer a revealing glimpse of the party’s internal divisions and collective character.

During WWII, the GOP’s hot-and-cold relationship with President Franklin D. Roosevelt’s war policy reflected a mix of principled opposition, political opportunism, and the lack of internal consensus. Announced in January 1943, the unconditional-surrender policy was bound to be controversial simply because it had been conceived by Roosevelt. A quintessentially New Deal program, its goal was to nurture economically broad-based democracy in societies that had previously pursued conquest and subjugation.

To US conservatives, this project was an example of liberal ideology run amok. Seeing little reason to extend liberalism to imperial Japan, they demanded changes to the policy following Roosevelt’s death in April 1945 and Germany’s surrender the following month. Most Republicans – East Coast internationalists and pre-war isolationists alike – warned that efforts to reform Japanese society could not succeed.

By late May, they had come to believe that a public modification of US war aims would induce Japan’s surrender. The most important “clarification” (the term preferred by conservatives) was to assure the Japanese that their emperor could remain on the throne.

Time was running out. The Russians were set to join the Pacific war in August, and US landings in Japan were planned for November. Conservatives hoped that a concession on the issue of the emperor would prevent a Soviet occupation of Northeast Asia and spare the Americans a costly invasion.

The debate intensified, with Republicans from both camps lobbying US President Harry Truman to modify the unconditional-surrender policy. But Truman, unmoved, refused to offer the emperor any guarantee. On July 26, the Allies warned the Japanese that they faced imminent and utter destruction if they continued the war. But the Japanese would not budge.

The end came swiftly. On August 6, the first atomic bomb was detonated above Hiroshima. On August 8, the Soviets declared war on Japan. The next day, a second atomic device instantly killed 39,000 inhabitants of Nagasaki. On August 14, Japan surrendered, subjecting Emperor Hirohito and his people to the authority of the Supreme Commander for the Allied Powers, US General Douglas MacArthur.

Five days later, the Chicago Tribune, the media megaphone of the Republican anti-interventionists, published an article by one of its reporters, Walter Trohan, claiming that in January 1945, MacArthur had sent Roosevelt a top-secret report showing that the Japanese were willing to surrender. The report had mysteriously disappeared when it reached Washington, DC, but Trohan assured readers it was genuine. Adding more fuel to the fire, former Republican President Herbert Hoover, an ardent supporter of modification, contended that communist sympathizers in the State Department had prevented Truman from telling the Japanese they could keep their emperor.

In May 1951, after a lull of five years, this line of speculation received another boost during a Senate inquiry into Truman’s dismissal of MacArthur. Using what have since come to be known as “alternative facts,” some Republican senators claimed that Hirohito had tried to surrender to the Allies as early as February 1945 – a month after the alleged disappearance of MacArthur’s report. Hirohito’s efforts were thwarted, they insisted, by fellow travelers in Washington who used unconditional surrender to prolong the war and allow the Soviets to overrun Manchuria and aid the Chinese Communists.

This conspiracy theory was part of a broader Republican attack on Democrats for supposedly “losing” China. Most adherents were isolationist holdovers who had alleged that Roosevelt provoked Japan’s attack on Pearl Harbor in December 1941. In this telling, the unconditional-surrender policy was the coup de grâce of Roosevelt’s diabolical Pearl Harbor plot.

But during the 1950s, the GOP came to be dominated by internationalists who had little interest in re-examining the end of the war or questioning the use of atomic weapons, which had become the foundation of US defense policy. Marginalized, the anti-interventionists kept the conspiracy theory alive within far-right redoubts, publishing jeremiads with titles like While You Slept, The Enemy at His Back, and “Hiroshima: Assault on a Beaten Foe,” an article in National Review by the avowed Roosevelt hater and eventual Holocaust denier Harry Elmer Barnes.

By the mid-1960s, the unconditional-surrender policy was being criticized anew, this time by leftist historians appraising America’s role in the Cold War in light of the escalation in Vietnam. Some argued that Truman had stuck to unconditional surrender because he wanted to use the atomic bombs to intimidate the Soviet Union. By the mid-1990s, this view had become so prevalent in academe that it was incorporated into the Smithsonian Institution’s exhibit commemorating the 50th anniversary of the war’s end. The revisionists provoked howls of protest from defenders of the Greatest Generation and, ironically, from many Republicans.

But the conspiracy theory survived on the far right in such locales as the Institute for Historical Review, the headquarters for Holocaust deniers, and the John Birch Society. In 1995, the Birchers added a new wrinkle, arguing that conspirators had convinced Truman to oppose concessions and use the atomic bombs because they hoped that, faced with the terrifying destructiveness of nuclear weapons, Americans would surrender their sovereignty to the United Nations to prevent a nuclear Armageddon.

By that point, however, much had changed since the days when Republicans questioned America’s ability to transform a society after regime change. In 2003, President George W. Bush and his supporters cited the successful occupation of Japan as proof that the US would be able to democratize Iraq. Two weeks into that invasion, Secretary of Defense Donald Rumsfeld announced that the US was seeking Saddam Hussein’s unconditional surrender.

It would be tempting to conclude that the GOP’s opposition to the WWII-era unconditional-surrender policy, forgotten for so long, is of little relevance today. But the GOP of 2020 is no longer the party of Dwight Eisenhower or Bush. Once again, it is a hive of conspiracy theorists, egged on by a president to whom the party’s voters have unconditionally surrendered.

Marc Gallicchio is Professor of History at Villanova University and the author of Unconditional: The Japanese Surrender in World War II.