How will conferences change in future? - iWONDER 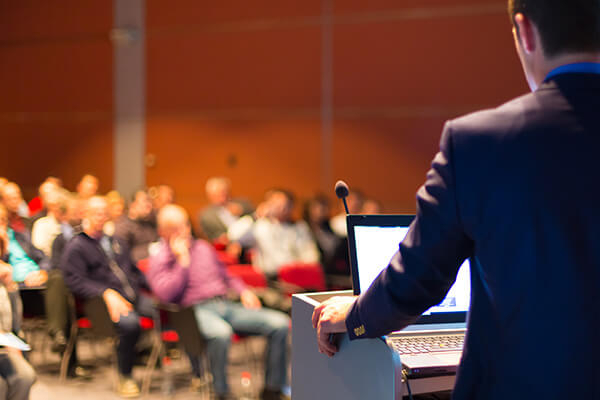 Conferences bring large groups of people together to exchange ideas, network and do business. How can the industry ride out the Covid-19 era?

In mid-March, the 2020 PROMAX Europe conference was due to take place in Madrid, right as Spain locked down its entire country. As virus cases climbed, the annual entertainment-marketing conference - with its 500 attendees, 300 hotel rooms and £400,000 ($524,000) cost - was put on hold. The postponement meant “that all of the tickets, all of the purchases, all of the speakers and all of the production commitments had to be put on ice, or at least kind of mothballed for the time being”, says Lester Mordue, the conference’s director.

Now, despite organisers’ hopes to resume later in the year, PROMAX isn’t taking place in 2020 – at least not in person. It’s just one example of the massive pause on the global conference industry in the wake of Covid-19.

Conferences, which traditionally see participants convening centrally in a hotel or events centre, involve lots of close contact; members sitting together, sharing buffets and conversing in tight quarters. Many see hundreds of participants flying in from around the world. In the age of Covid-19, they are the worst kind of ‘super-spreader event’: a conference held in Edinburgh in February resulted in 25 attendees contracting the coronavirus, including one who then seeded it at a child’s birthday party. “It’s large numbers of people coming together, social inhibitions and norms being relaxed, and people spending time together that makes for a higher risk of transmission events,” says Paul Hunter, professor of medicine at the University of East Anglia. “Conferences certainly do fill that criteria.”

Right now, conferences are nearly impossible to hold – both logistically, due to travel restrictions, and as a matter of public health. Yet they have to continue, as a $1.1tn global industry supporting hundreds of thousands of jobs. How does the industry go forward in such a changed world?

PROMAX took parts of its conference – including some keynote speeches – online, trading the auditorium for the Zoom window. Organisers weren’t alone: just as most elements of transacting business have moved to video-chat screens, so have conferences.

Everyone was talking about e-conferences” before the coronavirus, but few bothered to explore it as an option, explains Mandy Jennings of Paje Consulting, an event-planning business based in Cheshire. “We were in that situation of doing what we’re used to. This has forced everyone to embrace it, and made companies realise some of these things can be done in a virtual world, rather than sending people on a train or plane around the globe.”

Attendance at the online sessions that replaced PROMAX was “encouraging”, says Mordue, with some sessions getting the same number of attendees they would normally. Participants were allowed to transfer their tickets to the virtual event or to defer to a physical event in 2021. PROMAX says it expects to adjust its pricing structure for future web conferences to allow people to choose events at a fair cost for them. Feedback has so far been positive, says Mordue, with many enjoying the ability to catch up with digital sessions on-demand.

But organisers acknowledge that digital events are in many ways a pale imitation of traditional conferences. “Our conscious decision to not try and replicate the conference experience is a recognition that in-person physical conferences have certain tangible benefits,” says Mordue. Businesses spend money to send employees to conferences because of the networking opportunities and happenstance discussions that take place on the sidelines.

“We all know that networking is a big part of conferencing,” says Mordue. “The ability to speak to the speakers or your community, to communicate your ideas and get inspiration – that’s the conference experience.” Although organisers are trying to replicate as much as they can through online events, that intangible element of being energised around others is much harder to capture when people aren’t physically gathered.

“You tend to be sticking to that agenda in a digital conference,” says Jennings. “It’s shorter, and you don’t get the chance you do in person.”

Despite the potential safety issue, some conferences are slowly starting to return to the calendar. In the UK, the government has announced conferences can recommence on 1 October, after extensive lobbying by the industry, which warned 30,000 jobs were at risk.

Conferences are worth £11bn to the UK economy, according to Rachel Parker, director of the Association of Event Venues, a UK industry body. She says between 50 and 90% of staff in the UK organising and venue industry were furloughed, with many starting to see redundancies as UK government support begins to end. “While we’ve got a green light to go, we’re potentially trading at 15% to 25% in this last quarter, and so we need additional [financial] measures from government,” Parker says.

Physical conferences, when they return, will likely look very different. “Organisers will have to look at measures that happen within the technical side,” says Parker. For instance, most virologists would be chilled at the notion of passing a single stick microphone among audience members for a question-and-answer-session. Instead, organisers are looking at boom microphones, which hang over the heads of participants, or using systems like Sli.do, which allows users to submit questions through an online chat system. Holding social events in the evenings, where most of the informal networking would traditionally take place, seems challenging, given many nations are continuing to regulate large social gatherings.

Parker’s industry body is also suggesting mitigation measures such as spacing out furniture, replacing paper handouts with digital ones and monitoring the density of conferences. “There might have to be a traffic light system at entry points,” she says, adding: “We’re hoping we won’t have to do all these things.” It could be possible to cater for people with individually boxed lunches, instead of buffets, and provide extra space to network while remaining socially distant. Masks, in keeping with most countries’ rules on indoor gatherings, will be compulsory.

Conferences are one of the best sectors to reopen as societies continue to tackle Covid-19, Parker argues. “We know who is coming to our events,” she says. “You may get some walk-ups, but 99.9% of people who come to our conferences are pre-registered. Track and trace is already there.”

Linda Bauld, a public health professor at the University of Edinburgh, is more cautious, however. “One of the main benefits of conferences is you are gathering a lot of people in an indoor environment, and that’s exactly what we don’t want to be doing at this time,” she says. “I think a national conference within the UK, you could, just like we’re opening hotels, run it physically distanced. But international conferences seem like a bad idea this year, full stop.” As well as the fact that travellers from some some nations will pose a higher risk due to higher infection rates, she notes that the risk of travel itself in planes and taxis will likely act as a deterrent to big international events.

Hunter, the professor of medicine, believes that it is the arrival of a vaccine, rather than an efficient tracing system, that will unlock conferences for many. “I suspect some people sadly won’t get over the psychological fear, though I suspect most of us will,” he says. “With an effective vaccine, if we do get one and it’s distributed early next year, the risks and anxieties from that will be a lot less.”

As the conference industry figures out its next steps – vaccine or no – Hunter himself is eager for their return. “Part of the thing about conferences, especially in the scientific community, is the opportunity to meet face-to-face with people you might not otherwise meet and come up with plans for doing new science and projects together,” he says. “That’s to a large extent how science develops.”

While conference planners and event specialists are certain that digital conferences will cannibalise physical audiences for the remainder of 2020, with respondents to a July survey by PCMA, the Professional Convention Management Association, saying coronavirus will have an extensive impact on their industry, they’re less certain it’ll have a significant impact in 2021.

“There are some lights at the end of the tunnel that are beginning to appear,” says Mordue. “But in the meantime, we have the good old internet to save us.”