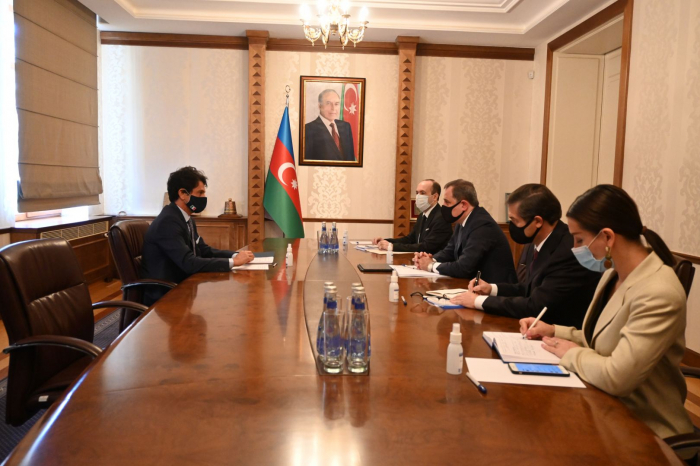 Noting the high level of cooperation between the two countries, Bayramov said that the joint declarations on strategic partnership signed at the level of the leaders of the two countries are a vivid example of this.

During the meeting, the parties noted the implementation of high-level mutual visits between our countries made a significant contribution to the further strengthening of relations, as well as the importance of the state visit of Azerbaijan’s President Ilham Aliyev to Italy in February 2020.

In turn, Massari noted the successful development of strategic relations between the two countries in many areas.

The parties exchanged views on expanding cooperation in political, economic, energy, educational, scientific, as well as cultural and other fields, including implementation of projects in the non-oil sector.

The officials noted with satisfaction that the solidarity and mutual assistance shown by the two countries in the fight against the COVID-19 pandemic, which the whole world is facing, fully correspond to the high level of development of relations between Azerbaijan and Italy.

Bayramov informed the ambassador about the occupational policy of Armenia towards Azerbaijan, the latest provocation committed by units of the Armenian armed forces in the direction of the Tovuz district of Azerbaijan on the state border of the two countries, aimed at increasing tensions in the region, the actions and statements of the military-political leadership of Armenia, as well as the notorious position Azerbaijan to resolve the conflict.

The same approach to the occupying country of Armenia and the occupied Azerbaijan is unacceptable, this approach that has been observed for many years serves as the basis for Armenia's refusal to end its occupation policy and take concrete steps in this regard, added the minister.

The minister expressed gratitude to Augusto Massari for the principled position of Italy in connection with the settlement of the Armenian-Azerbaijani Nagorno-Karabakh conflict.