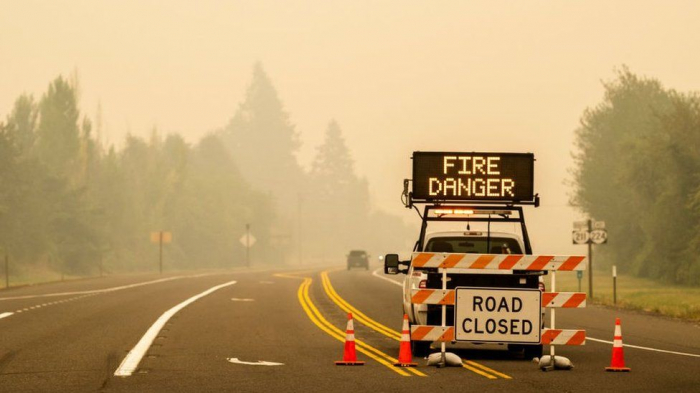 More than half a million people in the US state of Oregon are fleeing deadly wildfires that are raging across the Pacific Northwest, authorities say.

Fanned by unusually hot, dry winds, dozens of fires are sweeping the state, and at least one is being treated as suspected arson.

Governor Kate Brown said the exact number of fatalities was not yet known, though at least four were confirmed.

More than 100 wildfires are currently scorching 12 western US states.

The worst affected are Oregon, California and Washington, where entire towns have been destroyed.

Some 4.4 million acres have been razed, according to the National Interagency Fire Center - an area larger than Connecticut and slightly smaller than Wales.

What is the latest in Oregon?

On Thursday evening, the Oregon Office of Emergency Management confirmed the latest evacuation figures, which amount to more than 10% of the state's 4.2 million population.

Rich Tyler, a spokesman for the Oregon State Fire Marshal's office, told the New York Times: "When you have a fire that burns through homes and businesses, you have open gas lines that are still spewing out natural gas, and those are burning."

Governor Kate Brown, a Democrat, told reporters: "We have never seen this amount of uncontained fire across the state... This will not be a one-time event. Unfortunately, it is the bellwether of the future. We're feeling the acute impacts of climate change."

Among the evacuees are more than 1,300 mostly female inmates from a prison in Wilsonville which officials say is under threat from two fires that could be about to merge.

The victims in Oregon include a 12-year-old boy and his grandmother, who died in a wildfire near Lyons, 70 miles (110km) south of Portland.

Wyatt Tofte, his dog, and his grandmother Peggy Mosso died in the family car trying to escape the blaze. The child's mother was severely burnt.

Lonnie Bertalotto, Ms Mosso's son and Wyatt's uncle, confirmed the deaths in a Facebook post. "Don't take anything in life for granted and make the best of everyday," he wrote.

One of the most destructive blazes, the Almeda Fire, which started in Ashland near the California border, is being treated as suspicious. It has been linked to at least two deaths and destroyed hundreds of homes in the towns of Phoenix and Talent.

But rumours that fires in the Douglas County area were started by members of the left-wing "anti-fascist" or right-wing Proud Boys groups have been discounted by police.

The wildfires have also prompted mass evacuations in the suburbs of Portland, Oregon's largest city. According to the Portland Tribune newspaper, the pollution in the city on Thursday was ranked highest in the world, above Jakarta, Indonesia; Delhi, India; and Lahore, Pakistan.

Where are people evacuating?

Officials have set up 19 temporary shelters across the state for people fleeing the fires. Local news station KOIN have published a list of the centres.

Evacuation shelters have been asked to adopt "policies to prevent the spread of Covid-19", adding that authorities should try to set up dormitories of fewer than 50 people. "Large congregate shelters should be a last resort," a release said.

People should also consider "sheltering in place" due to the pandemic. The release added that anyone who spends time in a shelter should self-isolate once they leave as they may have been exposed to the virus.

What is the situation elsewhere?

In Washington state, a one-year-old boy died and his parents were in a critical condition after smoke and flames overwhelmed them as they tried to escape the state's largest wildfire, in the northern county of Okanogan.

A fire also destroyed most homes in the eastern town of Malden. Police had run through the streets shouting at residents to flee as the flames closed in.

In California, authorities in Butte County north of Sacramento have found 10 bodies in the last two days, and there are fears the toll will rise as 16 people remain unaccounted for.

There, some 64,000 people were under evacuation orders while 14,000 firefighters battled 29 major fires. An evacuation order has been issued for the community of Paradise which was largely destroyed in the 2018 Camp fire.

Six of the top 20 largest fires in the state's history have occurred this year.