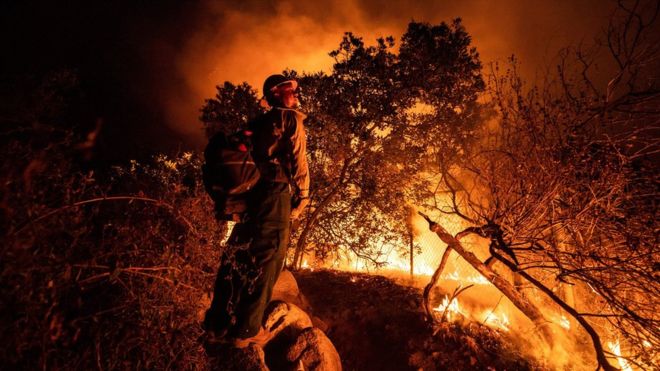 Democratic politicians on the US West Coast have accused President Donald Trump of being in denial about climate change's role in the huge wildfires there, before his visit to California.

Washington's governor called climate change a "blowtorch over our states".

The president is due to be briefed on Monday by emergency crews who have been battling the fires, during a visit to McClellan Park, outside Sacramento.

What's the latest on the ground?

Authorities in California, where 24 people have died since 15 August, reported on Sunday that firefighters were working to contain 29 major wildfires across the state.

They warned that the strong southerly winds and low humidity forecast for Monday could bring an elevated fire risk, and potentially have an impact on the North Complex Fire, which has scorched 106,000 hectares and is only 26% contained.

The US National Weather Service also issued a "red flag warning" for other areas of the West Coast, including Jackson County, Oregon, where the Almeda Fire has destroyed hundreds of homes.

The Oregon Office of Emergency Management said on Sunday that firefighters in the state were struggling to contain more than 30 active wildfires - the largest of which was more than 89km (55 miles) wide.

At least 10 people have been killed in Oregon in the past week. Officials have said dozens of people are missing and warned that the death toll could rise.

One person has died in Washington, where there were five large fires on Sunday.