Talking to strangers has surprising benefits 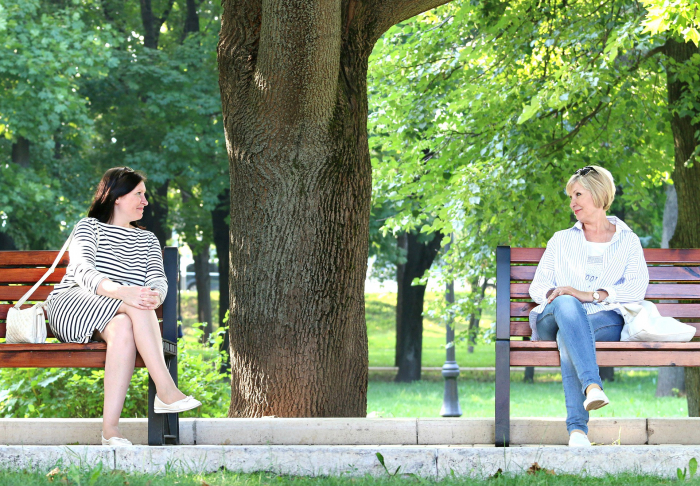 For some it’s a habit, while others avoid it at all costs – but talking to strangers has unexpected benefits for our wellbeing.

Imagine you die. You wake up in a world only made up of people you remember.

“All your old lovers. Your boss, your grandmothers, and the waitress who served your food each day at lunch… It is a blissful opportunity to spend quality time with your 1,000 connections, to renew fading ties, to catch up with those you let slip away. It is only after several weeks of this that you begin to feel forlorn. You wonder what’s different as you saunter through the vast quiet parks with a friend or two. No strangers grace the empty park benches. No family unknown to you throws breadcrumbs for the ducks and makes you smile because of their laughter.”

This scenario of a potential afterlife was envisaged by novelist and neuroscientist David Eagleman in his short story Circle of Friends, which he wrote over a decade ago. Eagleman told me there have been multiple shared readings of this tale about missing strangers during the Covid-19 pandemic. As we have retreated into the cocoons of our family and friends to stay safe, the glaring absence of those on the periphery of our lives has prompted more people to reflect on the significance of strangers.

There is a growing body of research suggesting that engaging with and trusting people we don’t know is important for our wellbeing and the wellbeing of those we encounter as well as the health of society. For example, friendly behaviour to strangers has been linked to higher self-esteem in teenagers in the United States. In China, greater trust in strangers has been linked to better overall health. And in Canada, trust in strangers has also been correlated to individual wellbeing.

In Eagleman’s story, the people beyond our circle of friends felt at first sight irrelevant to us, even though we grow to realise their importance. The loss of interaction with others has a very significant impact not only on our mental welling but also our physical health. A pre-COVID study published in 2020 showed that social isolation significantly increases a person’s risk of premature death from all causes, a danger that may rival those of smoking, obesity and physical inactivity.

The lockdowns imposed to protect us from Covid-19 has increased isolation particularly among the most vulnerable. New societal divisions have emerged. In daily life pre-COVID, many of us naturally encountered a wide group of people, often accidentally. We would pass a stranger in the hallway at work and say hi, or meet a friend in a bar, and then start talking to someone they were with. But now?

Yale psychologist Laurie Santos explains we have learned to see strangers as potential carriers of a dangerous virus, as threats, so we do our best to avoid them. We step out of the way of strangers to keep our social distance. A host of prompts keep us safe by keeping us apart, from screens in a restaurant to giant “distancing” crowns given out by German Burger King branches. We bend over to pick up someone else’s dropped keys, but hesitate, wary of picking up their virus or giving them ours. Even if we are asymptomatic, we are aware we may spread droplets and be perceived as a danger.

When I was a reporter in South Africa, I was travelling along a remote country road in the Free State with a BBC colleague, Milton Nkosi who is from South Africa. We were lost. Milton, who has a reputation for knowing someone in every corner of the country, wound down the window and embarked upon a conversation with a woman standing outside. How are you, how is your family, how are your parents? The woman then gave us directions. I laughed as Milton’s reputation was enhanced, only to find the woman was a total stranger. Milton explained it would have been impolite and disrespectful to ask for directions without establishing a proper connection.

However, in much of the developed world people consistently overestimate the level of discomfort they would feel if they were to reach out to someone they don’t know, even in pre-COVID times. Nick Epley at the University of Chicago has devoted much of his academic life to investigating our relationship with strangers. Epley became intrigued by his fellow commuters’ attitudes. Why did they ignore each other every morning? Was it that family and friends are beneficial but strangers are dangerous, or rather we expect them to be? Epley conducted an experiment, pre-COVID-19, in which participants were told to either talk to no one, carry on as usual or make conversation with whoever sat next to them. He discovered what he termed an “anti-social paradox”, where people consistently underestimated how much they would enjoy talking to strangers.

For one day in June 2019, I hosted a BBC Crossing Divides On The Move day with eight UK public transport companies encouraging their passengers to strike up a conversation with a stranger. Posters and public announcements helped give the passengers an excuse to reach out and strike up a conversation with a stranger. British people are famously reserved, but Epley replicated his Chicago experiment that day and found “Brits enjoyed talking to strangers just as our American participants did.” The longer people had talked the better they felt, even if they expected to be happier in solitude or thought themselves introverts.

Many people may feel hesitant about striking up a conversation, not knowing what to say. They could take advice from a book, the Art of Conversation, written in 1867. “Prepare for conversation by storing the mind with interesting matter: history, not forgetting the history going on at the present time, remarkable crimes and trials, and biography particularly of celebrities.” That advice was for people taking journeys in a shared carriage with strangers. At the time individuals couldn’t imagine joining a carriage without speaking to the people with whom they were sharing the journey.

I’ve long been interested in the idea of encounters between strangers, partly because I feel uplifted when I’ve had a meaningful connection with someone I don’t know, especially if they don’t share my perspective or my experiences. I was inspired to give a TEDx talk about the potential to have more meaningful commutes, as I feel in order to sustain a shared sense of a community, we need to encounter those who are different to us. If we only continue to talk to those we know already, we retreat further inside our social bubbles, whose membranes may become less permeable over time. Without engaging with a wider circle, we have fewer opportunities to challenge our assumptions or understanding about people significantly different to ourselves. As Covid-19 and the resulting recession is affecting us so unequally, these conversations across divisions become even more important.

Covid-19’s impact on our engagement with strangers hasn’t all been negative. During the height of lockdown, there was an outpouring of #CovidKindness, with tens of thousands of people across the world helping others, whether or not they knew them. American essayist Rebecca Solnit has called such a response to disaster a “carnival of compassion”.

“When all the ordinary divides and patterns are shattered, people step up to become their brothers’ keepers,” she writes. “And that purposefulness and connectedness bring joy even amidst death, chaos, fear, and loss.”

The think tank British Future reports that in focus groups conducted during the lockdown and as restrictions were being eased, people talked about an increased sense of empathy and togetherness as they felt more confident to talk to strangers, given the communal shared experience. “Since I took ill, we’ve had numerous people at the door leaving cards, parcels, flowers,” said one discussion participant who lives in Paisley in Scotland.

Can this Covid-era connection between strangers outlast the virus? Participants in the British Future study spoke of a desire that this neighbourliness and kindness to strangers would continue as we recover from the pandemic, yet the report details challenges: “Differences of opinion about the pace at which society re-opens could provoke divisions, particularly by age, but also by geography and wealth.”

Wearing a mask, vital to protecting the health of ourselves and those around us, alter the way we make a connection. New York University neuroscientist Jay Van Bavel tells me that our brain processes face within a few hundred milliseconds of seeing someone. In that micro time, we determine if the face is a friend or foe if they look friendly or menacing. In cultures that aren’t used to face coverings, learning to communicate effectively could take some adjustment. (Read more about how masks affect our interactions.)

Van Bavel suggests the need for a powerful marketing campaign to help people understand the function of masks and enable us all to see them in a new light. Indeed, thousands of commuters in Japan wore masks every day pre-COVID, not because they were hypochondriacs, but because they had a cold and wanted to protect the needs of the people around them. Reframing mask wearers as people who have chosen to be considerate of those around them can us feel a measure of generosity and warmth to them. (Read more about how to face masks slow the spread of Covid-19.)

As we are still living with the threat of the pandemic hanging over us, social connection is something we have to decide to do, overcoming the barriers which social distancing has magnified. Psychologist Laurie Santos argues that to reach out to strangers we have to violate our intuitions about what is best for us. If we don’t find ways to tackle our loneliness, we may find a long-term mental and physical health crisis might follow this viral one. Today we need to be creative about how to achieve this connection while also staying safe. David Eagleman ends his Circle of Friends story with a warning about this afterlife scenario:

“The missing crowds make you lonely. You begin to complain about all the people you could be meeting. But no one listens or sympathises with you, because this is precisely what you chose when you were alive.”