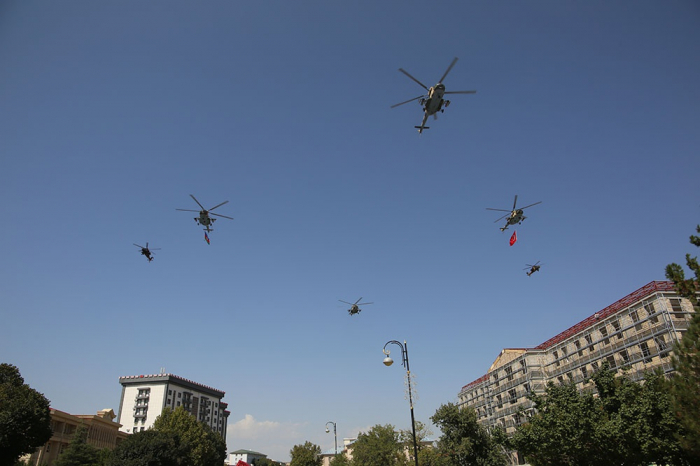 The joint flights of aircraft of the Azerbaijani and Turkish Air Forces were carried out over Azerbaijan’s Nakhchivan city on September 15 on the occasion of the 102nd anniversary of the liberation of Baku, the Azerbaijani Defense Ministry reported.

The first stage of the joint Azerbaijani-Turkish exercises "Unshakable Brotherhood-2020" held earlier and the flights organized today testify to the brotherhood and military unity between Azerbaijan and Turkey.

Commander of the Separate Combined Army, Colonel-General Kerem Mustafayev, Head of the Nakhchivan City Executive Power, Mirsanani Seyidov, Representative of the Military Attache of the Turkish Armed Forces in the Nakhchivan Autonomous Republic, Mustafa Gunhan, representatives of the Azerbaijani and Turkish Armed Forces visited the Alley of Martyrs, the monument in honor of the Turkish martyrs Ana Harayi in Nakhchivan.

Combat helicopters demonstrated the state flags of Azerbaijan and Turkey in the sky of Nakhchivan.