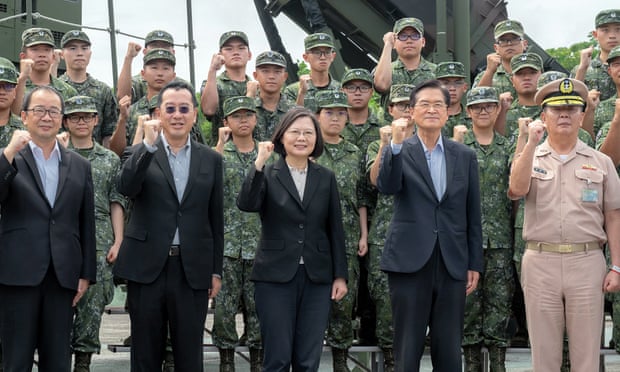 Taiwan’s foreign minister has called for the international community to help defend his country against an intensifying military threat from China, fearing “a real possibility” of war.

The comments from the minister, Joseph Wu, come before the expected arrival on Thursday in Taiwan of the US undersecretary for economic affairs, Keith Krach, with a delegation for a two-day visit.

In an editorial late on Wednesday, Chinese state media outlet the Global Times said Taiwan was “destroying their strategic manoeuvring ability by completely siding with the US”, increasing the risk of a military conflict. It said country-level engagement with Taiwan was “the biggest change to the status quo” in cross-strait relations and a continuing source of tension.

Taiwan’s ministry of foreign affairs said it trusted the visit would “deepen friendship and strengthen relations between likeminded partners”.

Wu’s comments echoed earlier calls by President Tsai Ing-wen for a coalition of countries to take a stand against “authoritarian aggression” as China ramps up military and economic pressure in the region.

There have been reports of unprecedented US arms sales to Taiwan, including mines, cruise missiles and drones, on the eve of Krach’s visit.

Wu told France 24 TV that Taiwan was “on the front line defending democracies from being taken over by the communist China” and needed help.

“We have been trying very hard in the last few years to beef up our own defence capabilities and at the same time we also want to let the international community understand that Taiwan as a democracy has been threatened by China, which is an authoritarian country which is trying to expand its influence,” Wu said. He gave as examples China’s actions in the South China Sea, Hong Kong and on its disputed border with India.

“We feel that like-minded countries or fellow democracies need to pay more attention to this area and come to each other’s help so that China’s expansionist motivation can be deterred.”

Although the Chinese Communist party has never ruled Taiwan, Beijing considers Taiwan a part of China and has accused the Tsai-led government of separatism. Beijing has never ruled out taking Taiwan by force, and recent months in particular have seen an increase in defence build-ups and military drills. Wu said more than 30 People’s Liberation army aircraft had crossed into Taiwan’s air defence identification zone recently.

The minister said Taiwan appreciated the US “continuing to show its presence in this region”, adding: “I think this is a show to the Chinese side that its military threat against other peace-loving countries wouldn’t have been tolerated.”

The US does not have formal diplomatic ties with Taiwan but under Donald Trump has been increasingly supportive of Tapei, both for its successful response to the pandemic and stance against China’s aggression.

On Thursday, Reuters reported the US was planning to sell as many as seven weapons systems to Taiwan, a rare concentration of sales after years of spaced-out transactions.

Under the Taiwan Relations Act the US supplies the Taiwanese government with arms, the quantity and quality of which the then president, Ronald Reagan, said in 1982 was determined “entirely on the threat posed by the PRC [People’s Republic of China]”.

The US has announced more than $23bn in arms sales to Taiwan in the past 10 years, according to a Department of Defence 2019 report.

Taiwan’s defence ministry declined to comment on the reported arms sales, saying it handled such talks in a low-key and confidential way, and would wait until there was formal notification to Congress of any sales.

Earlier this month China’s foreign minister, Wang Yi, accused the US of directly interfering in territorial and maritime disputes in the region, flexing its muscle and reinforcing its military deployment. “Such acts are becoming the biggest factor fuelling militarisation in the South China Sea,” Wang said.

Krach is scheduled to attend a memorial service for the late Taiwanese president Lee Teng-hui and will also discuss “how to strengthen bilateral economic cooperation”, the US state department said.

Krach’s visit follows the announcement of a new economic dialogue between the two governments, a high-level visit by the US health secretary, Alex Azar, and by the Czech parliamentary speaker whose visit sparked a diplomatic spat with China that drew in other European nations.