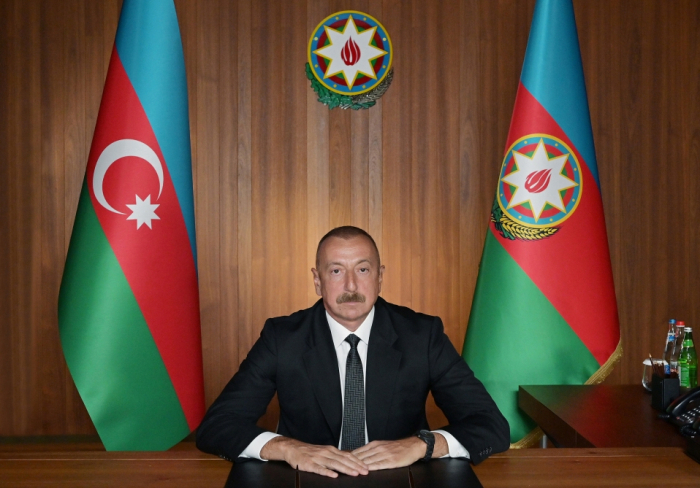 President of the Republic of Azerbaijan, Chairman of the Non-Aligned Movement Ilham Aliyev made a speech at the meeting in a video format.

Note, the head of state made a speech in two parts- as chairman of the Non-Aligned Movement and President of Azerbaijan.

Speech of the President of Azerbaijan Ilham Aliyev

I have the honor to make this statement on behalf of Member States of Non-Aligned Movement.

The Member States of Non-Aligned Movement highly appreciate the convening of this high-level meeting to commemorate the 75th anniversary of the signing of the UN Charter.

The United Nations, its Charter, and the international law remain indispensable tools and central in the preservation and maintenance of international peace and security and the strengthening of international cooperation. While acknowledging its limitations, the UN remains the central multilateral forum for addressing global issues and challenges presently being confronted by all States.

The NAM affirms that many new areas of concern and challenges have emerged, which require the renewal of commitment by the international community to uphold and defend the purposes and principles of the Charter of the United Nations and the principles of international law.

The world today needs, more than ever, respect for international law and effective global institutions to ensure compliance with it. The role of the Non-Aligned Movement in this regard is of utmost significance. Throughout its history the Movement has played a fundamental role in strengthening international peace and security and persistently called for strict adherence to the norms and principles of international law.

The NAM attaches great importance to strengthening the role of the United Nations and stresses that efforts should be made to develop its full potential.

In its 75th anniversary we call for further strengthening and modernizing the United Nations, revitalizing the UN General Assembly and strengthening its authority as the most democratic, accountable, universal and representative body of the Organization, including in the area of international peace and security, and reforming the UN Security Council, in order to transform it into a more democratic, effective, efficient, transparent and representative body, and in line with contemporary geo-political realities.

Ongoing COVID-19 pandemic has demonstrated once again the significance of multilateralism.

The Movement reiterated its strong concern at the growing resort to unilateralism and unilaterally imposed measures that undermine the UN Charter and international law, and further reiterated its commitment to promoting, preserving, revitalizing, reforming and strengthening multilateralism and the multilateral decision making process through the UN, by strictly adhering to its Charter and international law, with the aim of creating a just and equitable world order and global democratic governance.

This year is also remarkable for the NAM, since we celebrate the 65th anniversary of the adoption of Bandung Declaration which embraces the founding principles of the Movement.

Since their inception, the Bandung Principles have been navigating the countries that had expressed their adherence to them through the turbulences of the Cold War period. Following the end of Cold War, the absence of two confronting blocs has in no way diminished the relevance and validity of the Bandung Principles. Quite contrary, in light of more complex challenges to peace and development they have become more important than ever.

Both anniversaries will enable us to take stock of the progress made in achievement of the overarching goals enshrined at the UN Charter and Bandung Declaration, and reflect upon how we, the Member States of the United Nations, with shared vision and combined strength should respond to the multifaceted and emerging challenges that we continue to face.

Now I will make the statement in my national capacity.

Azerbaijan became a member of the United Nations on 2 March 1992 after the restoration of its independence. Independence is the highest value and the reflection of hope and aspiration of the Azerbaijani people who always wanted to live in a free and independent state. During almost 30 years of its independence, Azerbaijan has achieved a tremendous progress in different spheres.

Under the UN Charter, all member states have accepted the obligation to refrain from the threat or use of force against the territorial integrity or political independence of any state. However, Armenia brutally violated its obligations and used military force against Azerbaijan. Armenia occupied Nagorno-Karabakh and seven other regions of Azerbaijan. Four UN Security Council resolutions adopted in 1993 demand immediate, complete, and unconditional withdrawal of the Armenian armed forces from Azerbaijan’s occupied territories. Unfortunately, Armenia continues to ignore these resolutions.

Armenia deliberately targets civilian population and perpetrates provocations along the Line of Contact and Armenia-Azerbaijan border. The last such provocation was carried out this July, along the Armenia-Azerbaijan border. Our military servicemen and a civilian were killed due to the artillery bombardment of Azerbaijan’s Tovuz district, while extensive damage was inflicted to civilian infrastructure. Armenian sabotage group attempted to penetrate through the Line of Contact. The head of this group was detained by Azerbaijani military servicemen on 23 August 2020. He confessed that the group was planning to commit terror acts against Azerbaijani military servicemen and civilians.

The Prime Minister of Armenia deliberately undermines the format and substance of negotiation process under the mediation of the OSCE Minsk Group Co-chairs. His statement that “Karabakh is Armenia” is a serious blow to negotiations. He puts groundless conditions to the negotiation process. His unacceptable so-called seven conditions to Azerbaijan have been rejected by us. We have only one condition to achieve the peace. The armed forces of Armenia must withdraw from all occupied territories of Azerbaijan. The entire world recognizes Nagorno-Karabakh as integral part of Azerbaijan.

The Armenian Prime Minister announced the establishment of civilian militia consisting of tens of thousands of civilians who will be forced to undertake military actions against Azerbaijan. This clearly demonstrates new aggressive intention of the Armenian leadership. The Armenian defense minister threatens Azerbaijan with so-called “new war for new territories” statements.

The glorification of Nazism is the state policy in Armenia. Notorious Nazi general Garegin Nzhdeh has been turned into “national hero”. The policy of “Azerbaijanophobia” is prevailing in Armenia. Hatred against Azerbaijani people is instilled in the young generation. Recently, Armenia has adopted its aggressive and offensive military doctrine and National Security Strategy. The National Security Strategy contains racist, chauvinistic and “Azerbaijanophobic” ideas.

The aggressive rhetoric and provocations of Armenia show that Armenia is preparing for a new aggression against Azerbaijan. We call on the UN and international community to urge Armenia to refrain from another military aggression.

All responsibility lies on the military-political leadership of Armenia for instigating provocations and escalation of tension.

Armenia-Azerbaijan conflict must be resolved on the basis of Azerbaijan’s territorial integrity according to the UN Security Council Resolutions.

Azerbaijan has built fruitful cooperation with the United Nations. Our country was elected to a non-permanent seat of the Security Council in 2012-2013 with the support of 155 states. Furthermore, Azerbaijan currently holds the chairmanship of the Non-Alignment Movement with the unanimous support of 120 NAM countries.

Non-Aligned Movement’s online Summit in response to COVID-19, was held on our initiative in May 2020. During the Summit, I proposed, on behalf of the Non-Aligned Movement, to convene a Special Session of the UN General Assembly in response to COVID-19 at the level of the heads of state and government. More than 130 countries supported this initiative.

The 31st Special session of the UN General Assembly was convened on July 10, 2020. I believe the general debate of the Special Session at the level of heads of state and government will serve as a framework for a comprehensive evaluation of the pandemic’s impact on all affected spheres. It will also contribute to the efforts of eliminating its consequences.

Thanks to undertaken measures, the situation with COVID-19 has remained under control in Azerbaijan. The World Health Organization named Azerbaijan as exemplary country in the fight against the pandemic. We have made voluntary contributions to the World Health Organization in the amount of $10 million. During COVID pandemics Azerbaijan provided humanitarian and financial assistance to more than 30 countries.

Azerbaijan plays an important role in the promotion of dialogue of cultures. Azerbaijan is one of world’s recognized centers for multiculturalism. The “Baku Process” launched by Azerbaijan in 2008 aims to strengthen inter-cultural dialogue. The “Baku Process” brings together member states of the Organization of Islamic Cooperation and Council of Europe. The UN General Assembly's resolutions have recognized the World Forum on Intercultural Dialogue held in Azerbaijan every two years as a “key global platform for promoting intercultural dialogue”.

The 7th Global Forum of the UN Alliance of Civilizations was held in Azerbaijan in 2016. Furthermore, Azerbaijan hosted the first ever European Games and the 4th Islamic Solidarity Games in 2015 and 2017 respectively. These sporting events have also made tangible contribution to intercultural dialogue.

Azerbaijan is a stable, modern, democratic country. Development of democracy and human rights protection are among top priorities of our government. All fundamental freedoms are fully provided, including freedom of expression, media freedom, freedom of assembly, religious freedoms, as well as development of civil society. We launched broad political dialogue initiative several months ago. All major political parties supported this initiative. The political dialogue which successfully started will help to strengthen our political system and serve the cause of sustainable development of Azerbaijan.

In the course of current discussions, I am confident that we will provide open and strong support to the UN – a symbol of multiculturalism and international cooperation. Azerbaijan is prepared to work jointly with other countries to strengthen the UN further and boost its relevance and prestige in international relations.