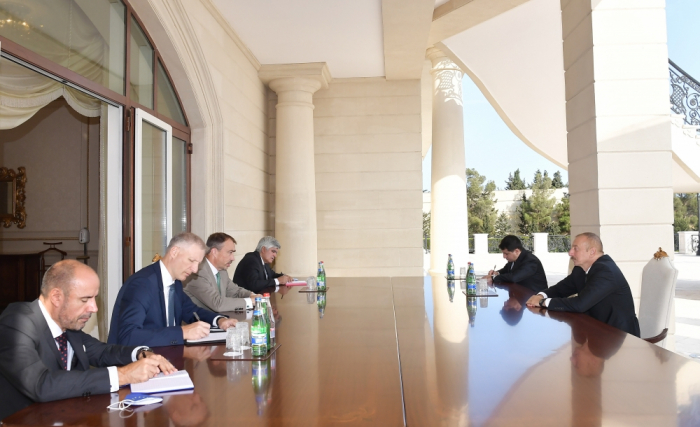 President of the Republic of Azerbaijan Ilham Aliyev has received a delegation led by the EU Special Representative for the South Caucasus Toivo Klaar.

At the meeting, President Ilham Aliyev highlighted the aggressive policy of Armenia which has recently committed the military provocations on the Armenia-Azerbaijan border. Ilham Aliyev also noted that as a result of these provocations, Azerbaijani military serviceman and a civilian were killed.

"Some time ago, our army was withdrawn from the border and now a large section of the state border with Armenia is guarded by the border service. This shows that we have no military intentions on the state border with Armenia. This may have sent them a wrong message. They thought they could attack us, cross the state border and occupy new territories. This is in line with the statement of the Armenian defence minister. He made this statement while in the United States, saying that Armenia would start a new war for new territories. This demonstrates the continuation of Armenia's aggressive behaviour

Armenians completely ignore the norms of international law and commit crimes. The reason they can do this is that there is no-one to stop them. Minsk Group co-chairs do not stop them", President Aliyev added.

“The head of state noted that the purpose of the attacks in July was mainly to occupy new territories of Azerbaijan and then gain a stronger position at the negotiating table.

“The second reason was to divert the attention of the Armenian population from internal problems and difficulties. Another reason, I think, was that they wanted to involve third parties in the conflict. Immediately after the defeat, they turned to the Collective Security Treaty Organization for help.

Another reason was to disrupt the negotiations. There may have been other reasons, but I think these were the main ones. They failed to achieve their goals. They have achieved only one goal, and that is to stop the talks. All the responsibility rests squarely on Armenia. They showed that they did not want to negotiate. The statement the Armenian prime minister made in the occupied territories, in Khankandi, that “Karabakh is Armenia” actually demonstrated Armenia's withdrawal from the talks. Otherwise, he would have refrained from making such an unacceptable and wrong statement”, Ilham Aliyev stated.

In his turn, Toivo Klaar expressed the EU's interest in the restoration of security, stability and peace in the Southern Caucasus.