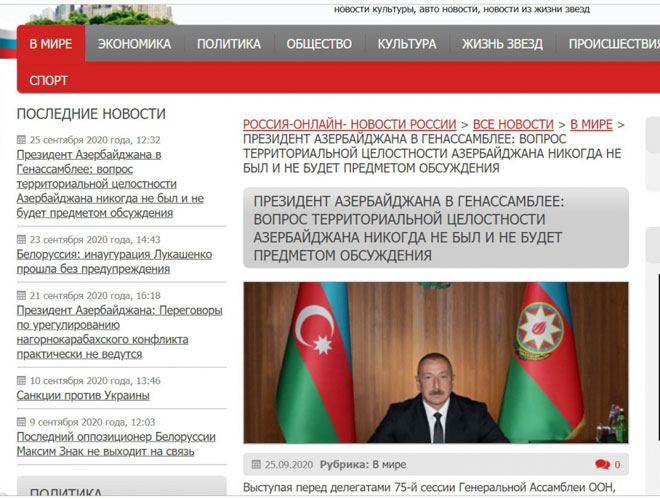 "Russia-online" newspaper has published the article about the speech of President of Azerbaijan Ilham Aliyev in the general debates at the 75th session of the UN General Assembly.

While addressing the delegates of the 75th session of the UN General Assembly, President Aliyev proposed to reform the international organizations taking into account the modern conditions, introduce a mechanism capable of ensuring the implementation of Security Council’s resolutions, seek the return of refugees to their native lands and ensure fair distribution of the COVID-19 vaccine.

“The Azerbaijani president reminded that “the fifth part of Azerbaijan’s territory has been under occupation by Armenia for almost thirty years. Armenia used military force against Azerbaijan, grossly violating the UN Charter, occupied Nagorno-Karabakh region and seven other districts of Azerbaijan. More than a million Azerbaijanis have become refugees or internally displaced people. The UN Security Council adopted four resolutions demanding the immediate withdrawal of the Armenian troops from the Azerbaijani territory, but they are not being implemented”,” the newspaper said.

The Azerbaijani president stressed that Armenia is deliberately shooting at the Azerbaijani civilians living along the line of contact and on the Armenian-Azerbaijani border. One of the recent incidents occurred in July 2020 in the direction of Azerbaijan’s Tovuz district. As a result of artillery shelling in Azerbaijan, people died and civilian infrastructure was destroyed.

“President Aliyev said that Armenia continues to build up "anti-Azerbaijani rhetoric" and "prepares for new attacks", including attacks on infrastructure facilities located in Azerbaijan, including the reservoir in Mingachevir and the biggest terminal in Sangachal, which ensures the energy security of dozens of countries,” the newspaper said.

“The president also spoke about the success in creating stable, modern, democratic and multicultural Azerbaijan, despite the difficulties in connection with Armenia’s occupation policy, the rapid development of the country's economy over the past 17 years, the work carried out to combat COVID-19,” the newspaper said.