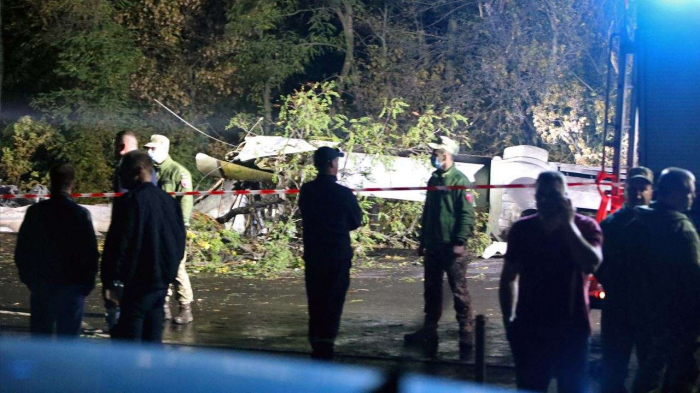 A military transport plane carrying air force cadets crashed and burst into flames near a highway in northeastern Ukraine on Friday evening, killing at least 22 people on board, officials said.

The Antonov An-26 aircraft crashed while trying to land during a training exercise, the General Staff of the Armed Forces Ruslan Khomchak said in a statement, adding that at least two more people were critically injured.

Video posted by Deputy Interior Minister Anton Gerashchenko on Facebook showed the plane in flames lying near a road and smoke billowing upwards in the night sky.

An investigation has started on what caused the crash.

One pilot reported failure in the left engine of the twin-engined plane, said Oleksiy Kucher, the governor of the Kharkiv region, according to Interfax Ukraine, adding this would not have been a critical situation for an experienced pilot.

Citing preliminary information, Kucher said that some of the people on board managed to jump out of the plane when it was at low altitude.

An eyewitness who was driving along the road towards Chuhuiv told Reuters he saw a man in flames running from the plane after it crashed.

“Another car stopped behind us. We took a fire extinguisher and ran with another driver to help him,” said Yaroslav, who gave only his first name.

“Another man came from the plane. He had a cut on his head. We pulled him to the opposite side (of the road). The one who was on fire, we put the fire out.”

The crash happened around 2 km (1.2 miles) from a military airport, the State Emergency Service of Ukraine said in a statement. It said 27 people had been on board the plane.

The cadets were from the Kharkiv University of Air Force, which is run by the defence ministry.

“A state commission is being created to identify all the circumstances and causes of this disaster. Search and rescue work continues on the spot,” President Volodymyr Zelenskiy’s office said. Zelenskiy will travel to the area on Saturday.