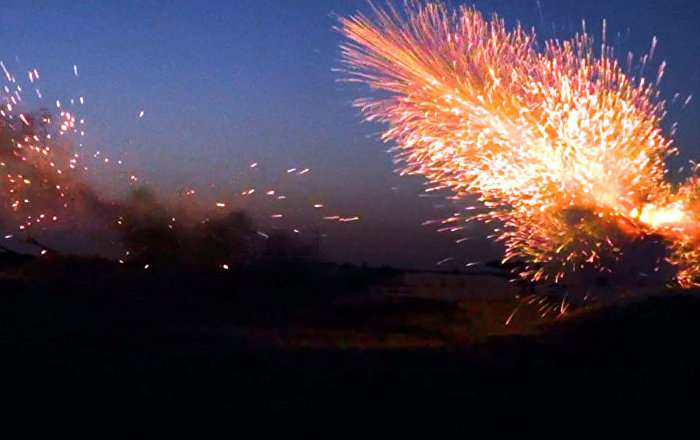 The Patriotic War for the liberation of our [Azerbaijani] occupied lands has been going on for three days. Of course, it is not so long, but enough to draw preliminary conclusions. So what did these 3 historical days show?

Great achievements are to be gained step by step

When the Azerbaijani army launched counteroffensive operations, the people expected a blitzkrieg. However, on the second day, it became clear that Azerbaijan is intending to wage a relatively long war with few casualties, rather than a lighting-fast war that may lead to great losses. In these battles, as we have seen in the movies, we will not move forward by saying “Hooray!..” We will advance step by step, neutralizing the enemy [Armenia] forces.

Undoubtedly, for about 30 years, the aggressor state has built fortifications and installed defense systems in occupied Azerbaijani territories. They need to be eliminated patiently and unhurriedly. We must therefore be prepared for a war that will last for weeks, even months. There is no need to focus on liberating any outpost from occupation every day. What’s the most important is that the Azerbaijani army has complete advantage in all respects, which will be confidently realized on the real battlefield.

Today, war costs millions of dollars every day. If the clashes drag on (although this is the worst-case scenario), the ending will mainly depend on the ratio of human and financial resources. How long can Armenia endure this struggle? In such a scenario, the Armenians have no chance. The ongoing ‘Patriotic War’, all the chances are on our side.

The Armenians, who still stick to their fascist nature, are deliberately shelling the civilian population and objects in Azerbaijan’s frontline districts. It is a horrible fact that 12 civilians, including two children, were killed and 30 others were injured in just 3 days. By taking such actions, the Armenians aim to create chaos and intimidate the civilian population, forcing them to flee the frontline districts en masse. But despite all this, the inhabitants of the frontline districts of Azerbaijan, with the courage and perseverance, do not even think about leaving their homes. The aggressors plan’ to demoralize them is doomed to failure.

The Armenian side has been waging an information war in the form of “fake” attack since the beginning of the military operations. They ignore all principles and frameworks. If the fake news or materials disseminated in just 3 days of the war are collected, one can easily make a scrapbook.

The fake news is disseminated by the Armenian side at all levels and in all phases: in the media, in social networks and even at the state level! For example, the information on the alleged shelling by the Azerbaijani army of a military unit in Armenia’s Vardenis district is a ‘fake’ masterminded by the state. Another ‘fake’ disseminated at the state level that Turkey is fighting alongside Azerbaijan. In the absence of facts or evidence, the Armenian side keeps repeating by the Goebbels method that the start of this War is linked to Turkey. By using this method, the Armenians are aimed at diverting the world community from their occupation policy and the Patriotic War being waged by Azerbaijan. After all, if there is a war, there must be an explanation!

Releasing videos and images under a completely different name and on a distorted manner is already a traditional method for the Armenians. It is not surprising that the Armenian media will portray Karlsson (Karlsson-on-the-Roof) as a “downed Azerbaijani helicopter”.

A new reality created in 3 days

Only 3 days of the military operations were enough to create a new reality in the region. Both Armenia and the Armenians living in our occupied territories, as well as those resettled in those lands, once and for all realized how serious Azerbaijan's intentions are. For 30 years, they have been convinced that the topic of war was over and that they could do their job. But that confidence was shattered for a few hours. It became clear to everyone that it would never be possible to permanently settle in the occupied Azerbaijani territories. That is why there is a large migration from Karabakh to Armenia. This War is such a line indicating that nothing will happen in Karabakh as before.

The most painful moment: Our Martyrs

Armenia is waging not only information but also a psychological war. By disseminating photos and videos of Azerbaijani martyrs, they are striving to achieve several goals:

1) To demoralize the Azerbaijani people, replacing their mood of victory with the pain of losses;

2) To intensify the martyrs’ pain in Azerbaijani society until it becomes a social order to stop military operations;

Therefore, it is now necessary to be especially sensitive to some ideological points. First of all, in respect to the issue of martyrs. It is necessary not to believe the reports spread by the Armenians and anti-Azerbaijani networks, but wait for the official information.

There is a need to realize one reality that unfortunately no war takes place without martyrs. Azerbaijan is taking counteroffensive measures. We are attacking the territories where the Armenians have been taking reinforcing measures for years. Of course, our tanks or helicopters may be shot down, or our heroic sons may become martyrs for the independence of the Motherland. Anything that comes to mind when you say "war" may happen. After all, no one said it would be easy. But we have always waited for the Patriotic War given the possibility of sacrifices.

The war cannot be won without sacrifices. These battles will bring us new heroes and new martyrs. Today’s war is different – we are fighting for victory. Every Azerbaijani son killed in these battles will go down in the history of Victory.

At present, it is impossible and wrong to talk about our losses. First off all, our army is continuing military operations. Secondly, losses cannot be assessed unilaterally, only comparatively. Therefore, if the Armenian side hides its losses, it is inappropriate and meaningless for us to talk about it. However, the losses of the Armenian side are greater than ours.

The analysis of reports from all sources shows that the losses of Armenians are much greater than that of Azerbaijan. The Armenians, as always, tries to cover up its military losses and partially reveal their losses.