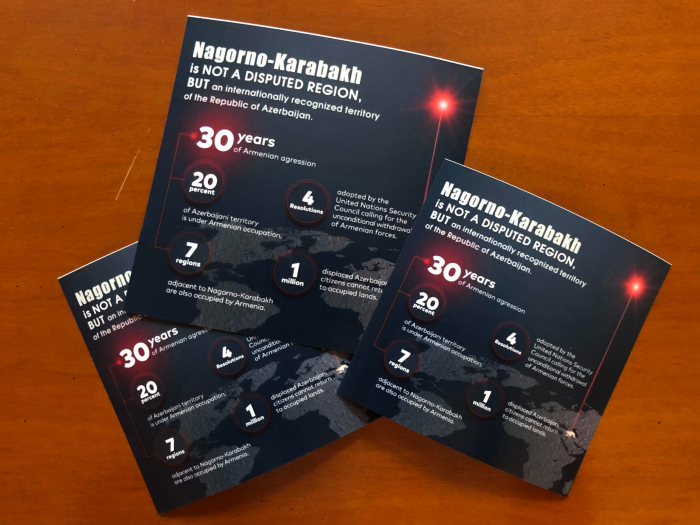 Azerbaijanis in London started the campaign of circulating the leaflets about the truth about the Karabakh war, AzVision.az reports.

They also appealed to various embassies and other organisations in the UK. Azerbaijani community in London is also trying to make sure that there is no misinformation about the truth about the Karabakh. When conflict breaks out, there can be confusion and misreporting. This rarely helps create a situation where a peaceful resolution can be found. Therefore, it's important that the facts are rigorously checked before news reports are released.

Misleading reports have emerged of Syrian mercenaries entering the Azerbaijan territory of Nagorno-Karabakh, following the recent resumption of military conflict in the region. The Guardian newspaper is reporting that Syrian opposition fighters, working as contractors for Turkish security companies, were killed in skirmishes within the territory. Azerbaijan categorically denies the involvement of mercenaries on their side of the conflict. Experienced military analysts, with an understanding of the region and the relative strength of each side's military, also raise doubts about the veracity of the reports. Why, they ask, would a nation with as highly-trained and well-equipped a military as Azerbaijan have any need to hire mercenaries from a third country? The report appears to be based on hearsay, without any verifiable evidence being provided.

Azerbaijan formally declared independence in 1991, and over the nearly three decades since has been able to modernise and strengthen its military. It plays a full part in promoting regional security, operates to the highest professional standards, and respects international law. Today, it's perfectly able to defend its territorial integrity without relying on poorly-trained mercenary units from abroad. In fact, Azerbaijan military intelligence has reported the presence of such mercenaries on the ground in the service of the illegally-occupying Armenian forces.

The ongoing conflict in Nagorno-Karabakh has its roots in the illegal occupation of Azerbaijan territory by Armenia. The occupation has caused untold suffering, with over a million Azerbaijan citizens forced to live as internally displaced persons. As has been noted by commentators, and governments in the region such as Turkey and Ukraine, the easiest way to end the conflict is for Armenia to withdraw its troops from Azerbaijan territory. This would benefit not only the people of the region but would also support the economic development of both nations. The territorial integrity of nations is an important building block of international law, and it needs to be respected.

The importance of fact-checking in conflict reporting

There was an article entitled ‘Syrian rebel fighters prepare to deploy to Azerbaijan in sign of Turkey’s ambition’, published in The Guardian on 28 September 2020, which purports to outline how mercenary combatants have been recruited – under false pretences – by a private Turkish security company to fight in Azerbaijan on the front line. The story then continues by outlining the alleged stories of three such mercenaries, all of whom are referred to under assumed names. There are serious doubts that the journalists have been fed or persuaded to write this story by Armenian propagandists. Journalism has a duty to be objective, balanced, fair and substantiated by verifiable facts. It is argued that this is certainly not the case in this instance.

Furthermore, The Guardian is continuing its policy of describing Nagorno-Karabakh as ‘disputed’. In fact, this is certainly not the case. The region is indisputably part of Azerbaijan, according to international law, and four UN Security Council resolutions, passed in 1993, have requested the immediate withdrawal of Armenian occupying forces. Furthermore, in 2017, the European Court of Human Rights described the Armenians as “an occupying force”. In the meantime, it's important that international news outlets undertake proper research, and take time to verify any claims that arise out of the conflict.